In April 2020 I pondered What Happened to Small Cap Value?

The previous 10 years or so had seen large cap growth stocks crush small cap value stocks. Then the pandemic hit and these small undervalued companies got crushed even more: 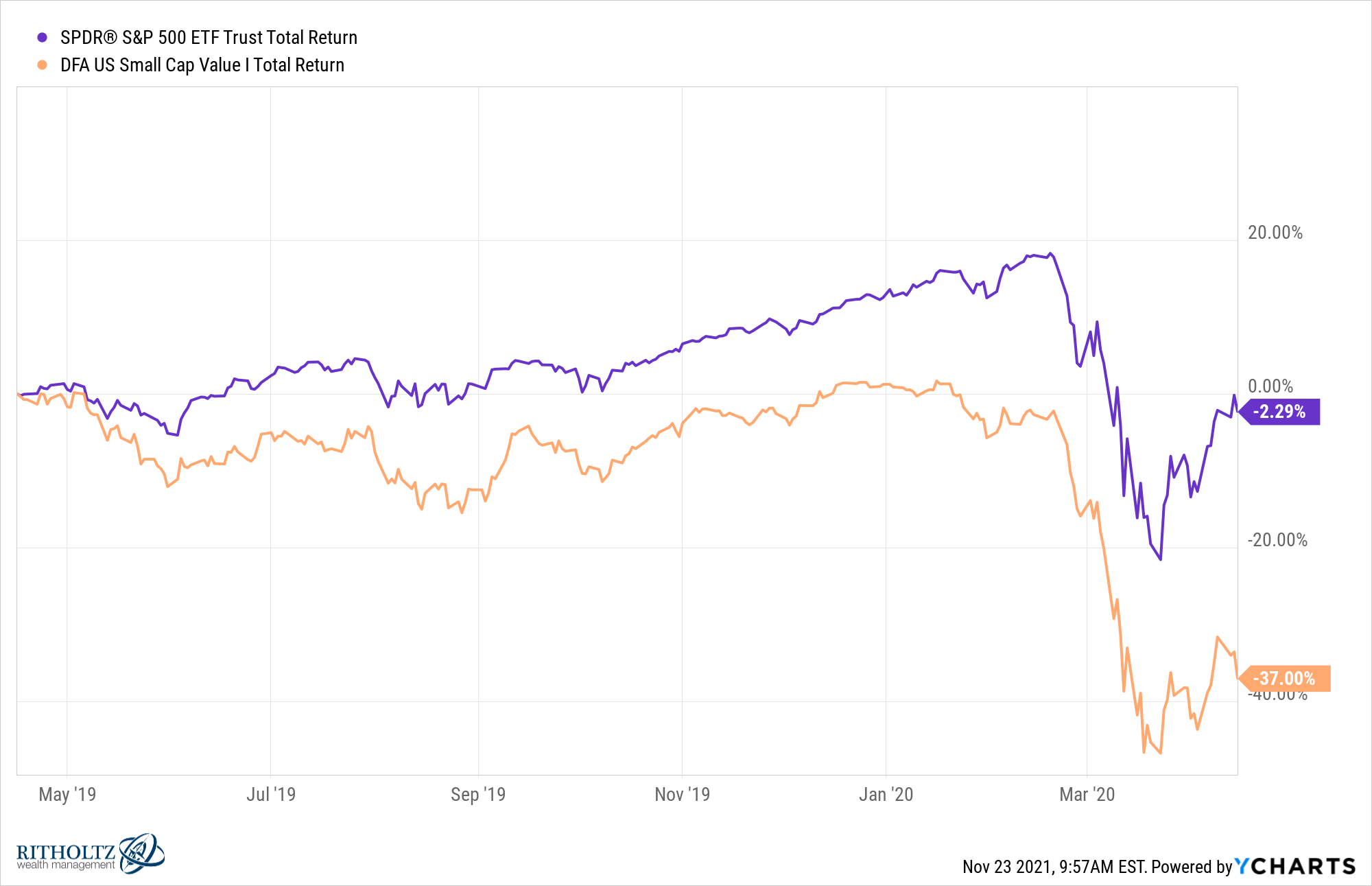 Seeing as I’m a glass-if-half-full kind of guy, I had to look for a silver lining to this poor performance. Small value stocks tend to do much better coming out of a recession: 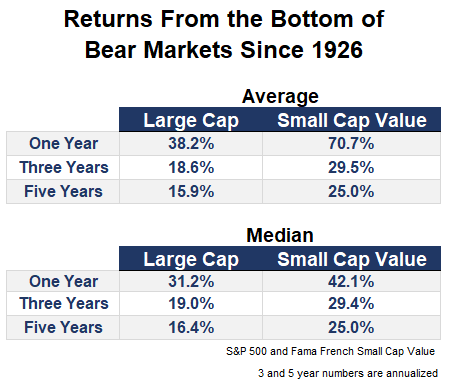 Later that same month I wrote a piece called Why Value Died in which I look at the potential culprits for the underperformance in value stocks.

There are plenty of reasons growth stocks beat the pants off value stocks for more than a decade (software is a big one) but one theory I threw out there was inflation being so low for so long: 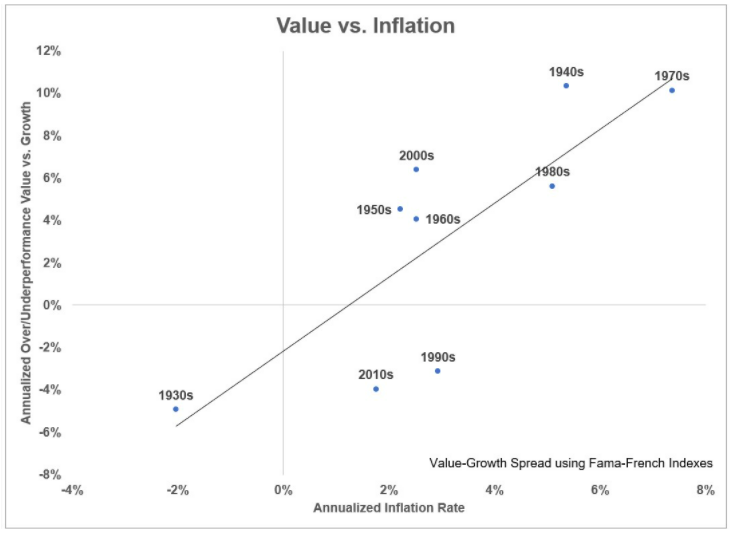 This makes sense from a textbook perspective. Here’s what I wrote at the time:

Think about growth stocks like they are a bond. The reason inflation is such a big risk for bondholders is because the purchasing power of your fixed rate income payments is eroded over time by inflation.

The same thing is true of promised future growth in revenue or profits for growth stocks. Value stocks likely already have cash flows now that will likely decrease into the future. Thus, higher interest rates should hurt value stocks less than growth stocks since the higher hurdle rate makes future growth not worth as much.

The stars were lining up perfectly. Risk was on immediately following the end of the short-lived Corona recession and we were at a higher risk of inflation for the first time in decades.

I had a call with a client in the spring of 2020 where I basically told them “If small cap value doesn’t work from here, it’s probably time to abandon the strategy.”

So what happened next? 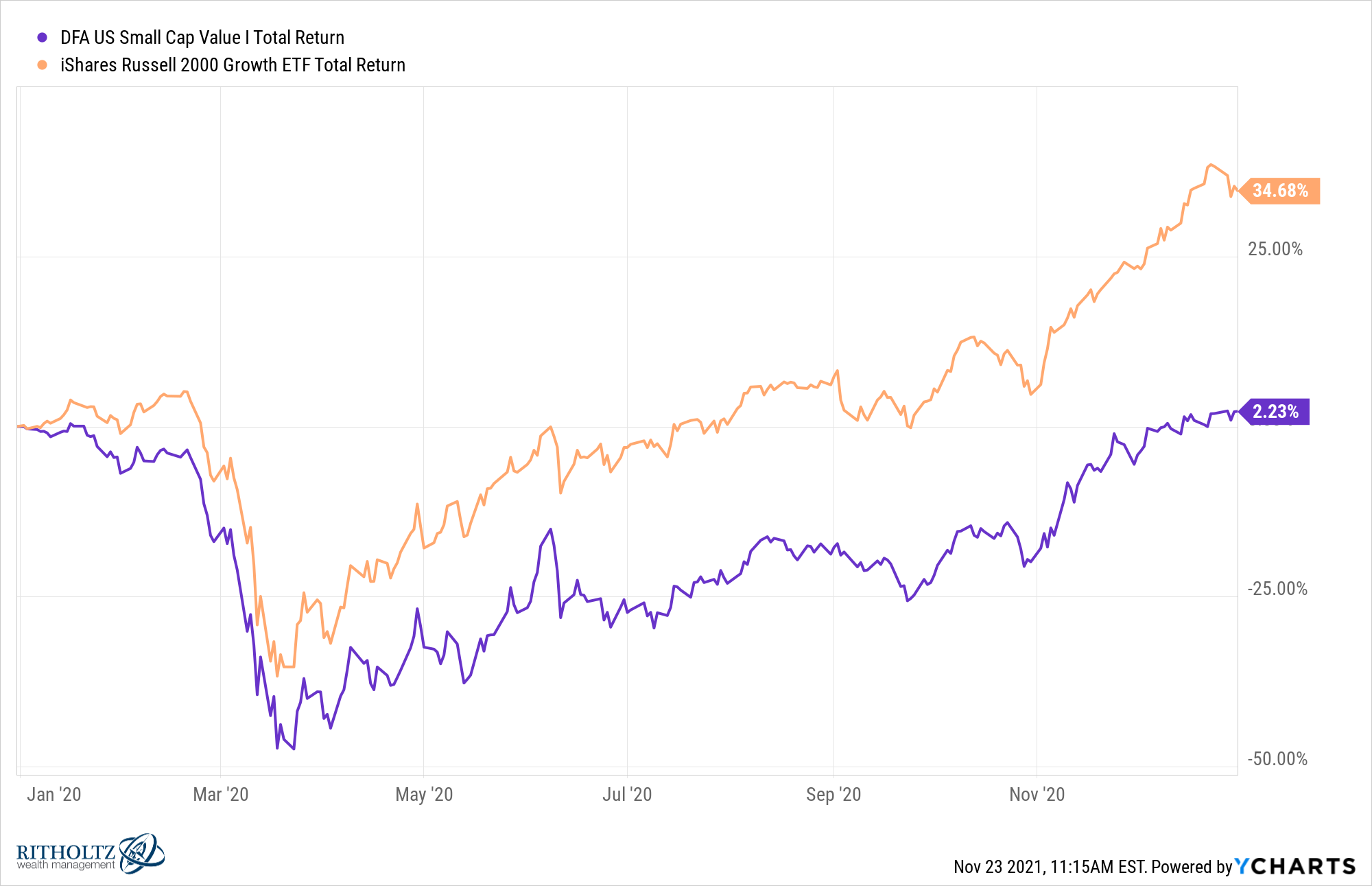 However, inflation didn’t really start picking up until the tail-end of 2020.

Now look at the returns over the last year: 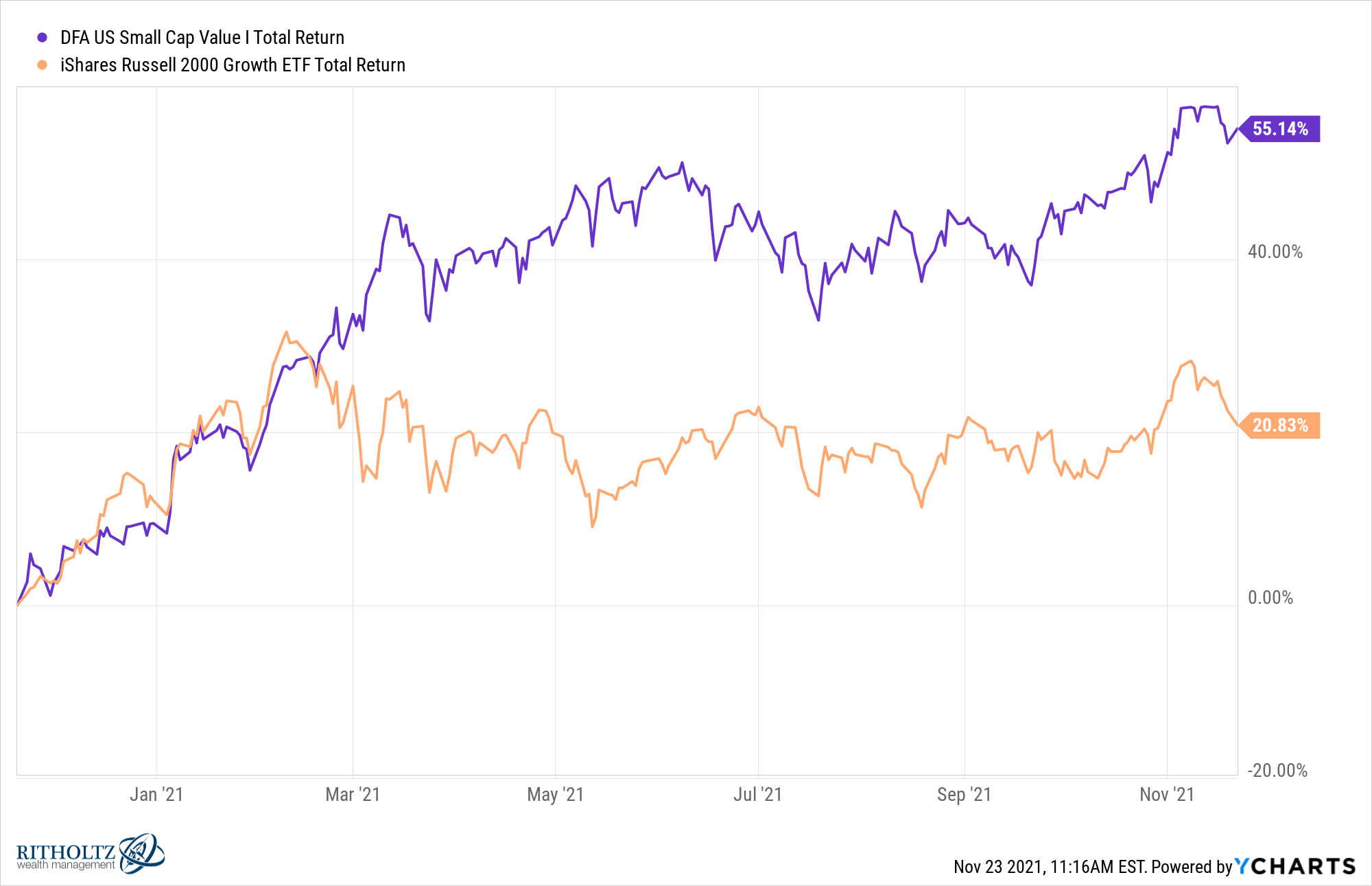 Value stocks have flipped the script. A lot of people were concerned about the impact of rising interest rates on growth stocks but maybe it was inflation that was the bigger risk.

Just look at the drawdowns in some well-known high fliers this year: 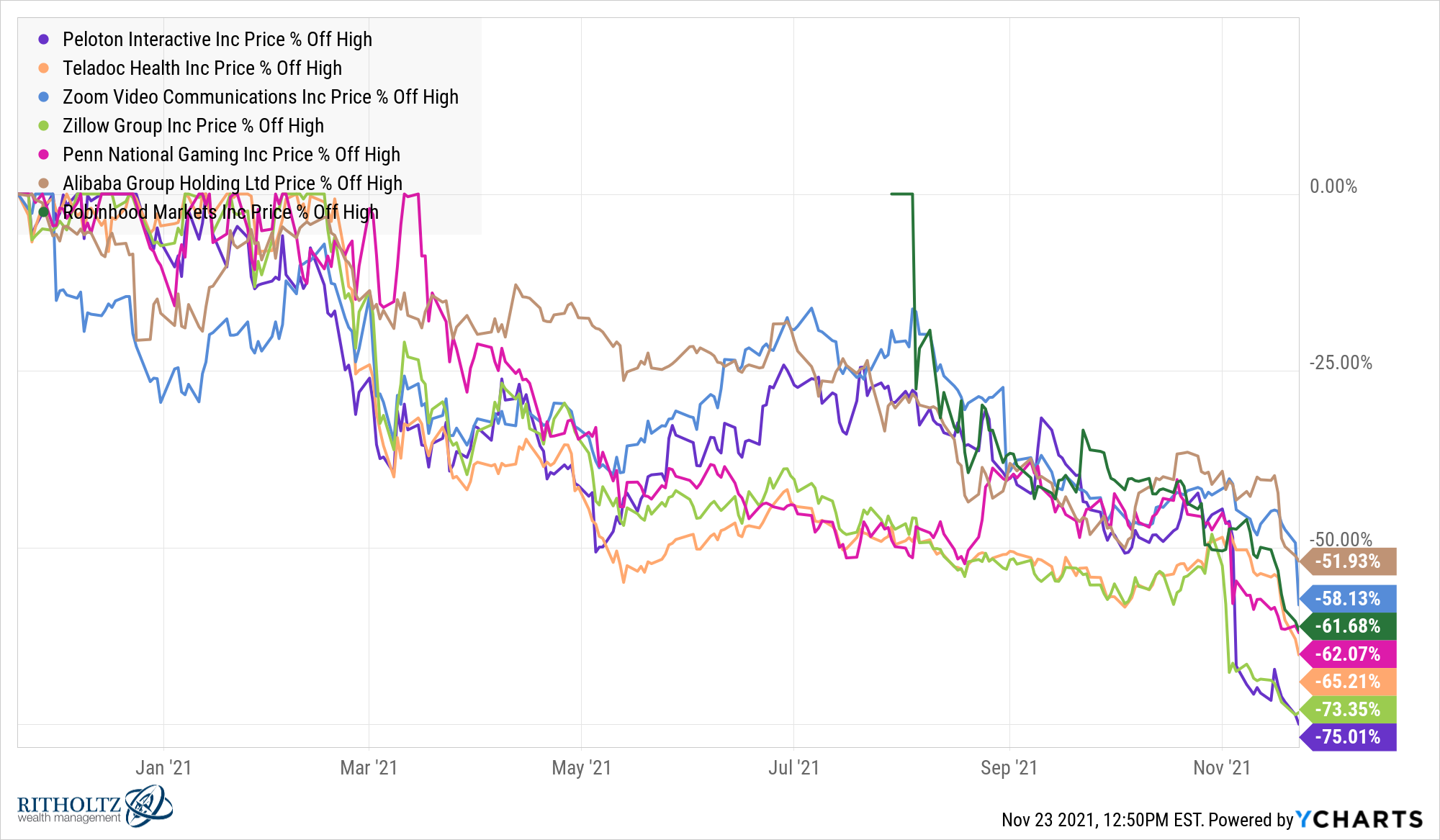 The stock market is near all-time highs yet large swaths of the market are getting wrecked. And it’s mostly growth stocks.

There is also a reversal taking place in some of the worst-performing sectors in the market.

Energy and financials both lagged by a wide margin in 2020 after underperforming for a number of years: 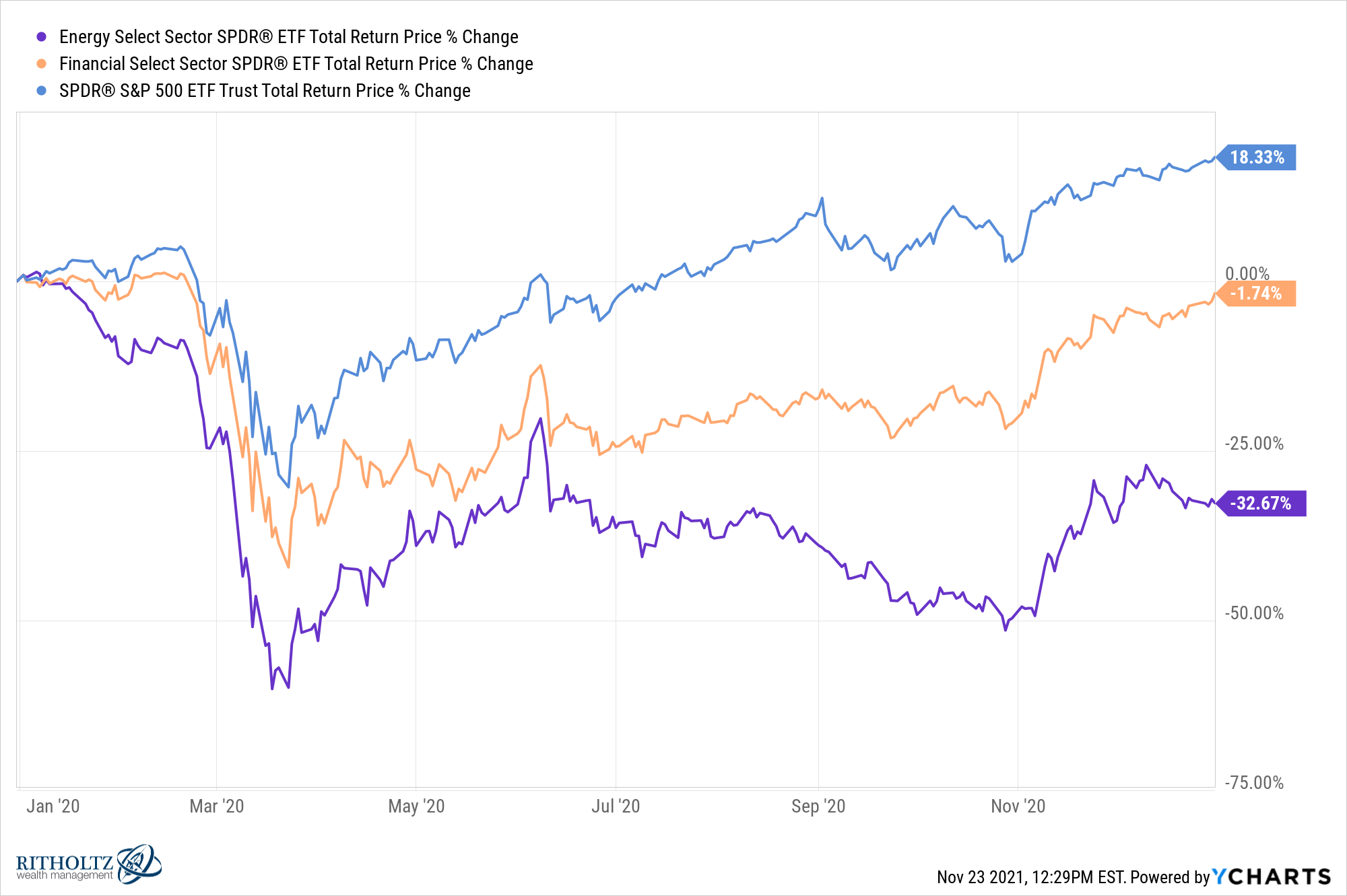 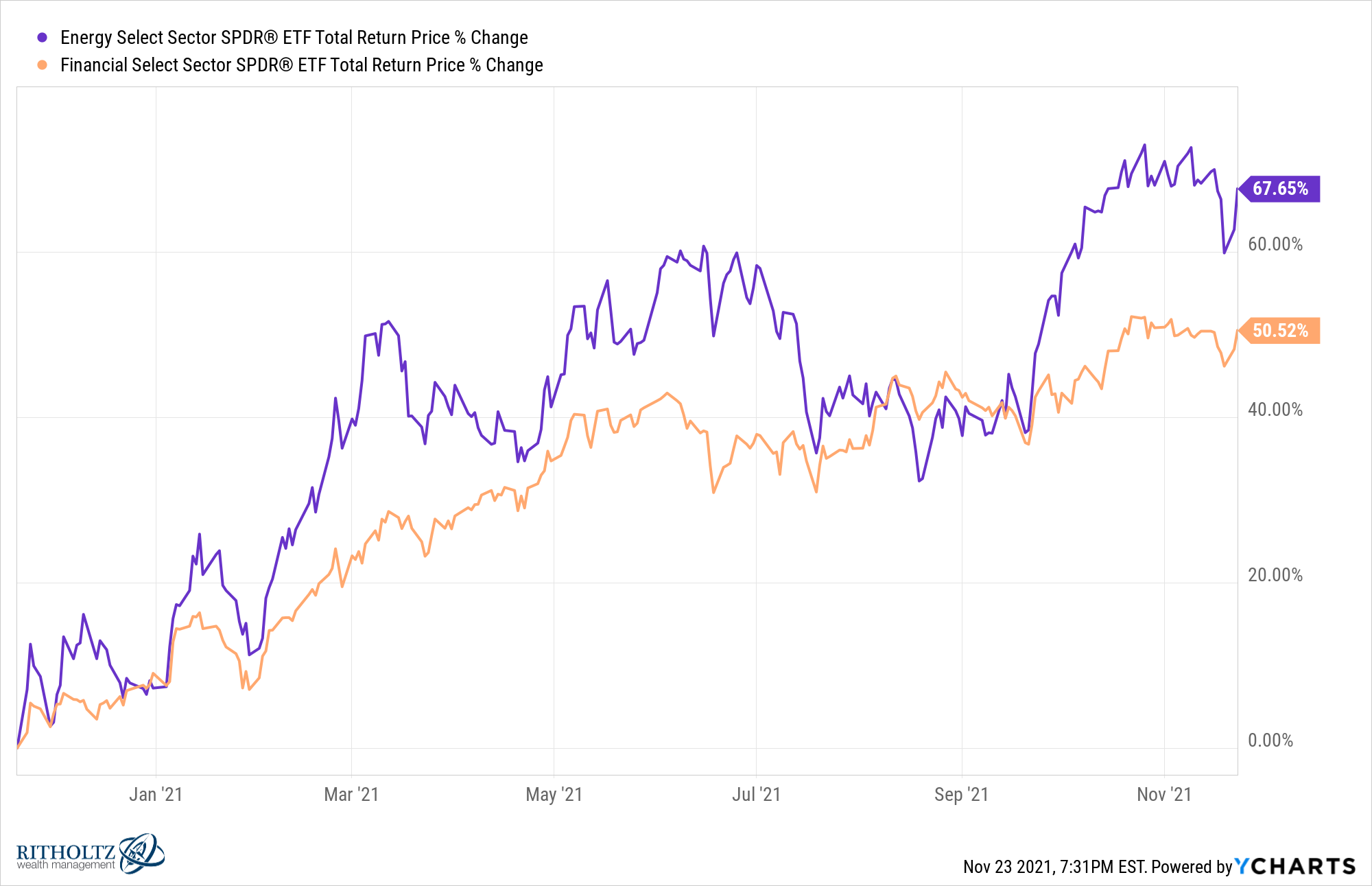 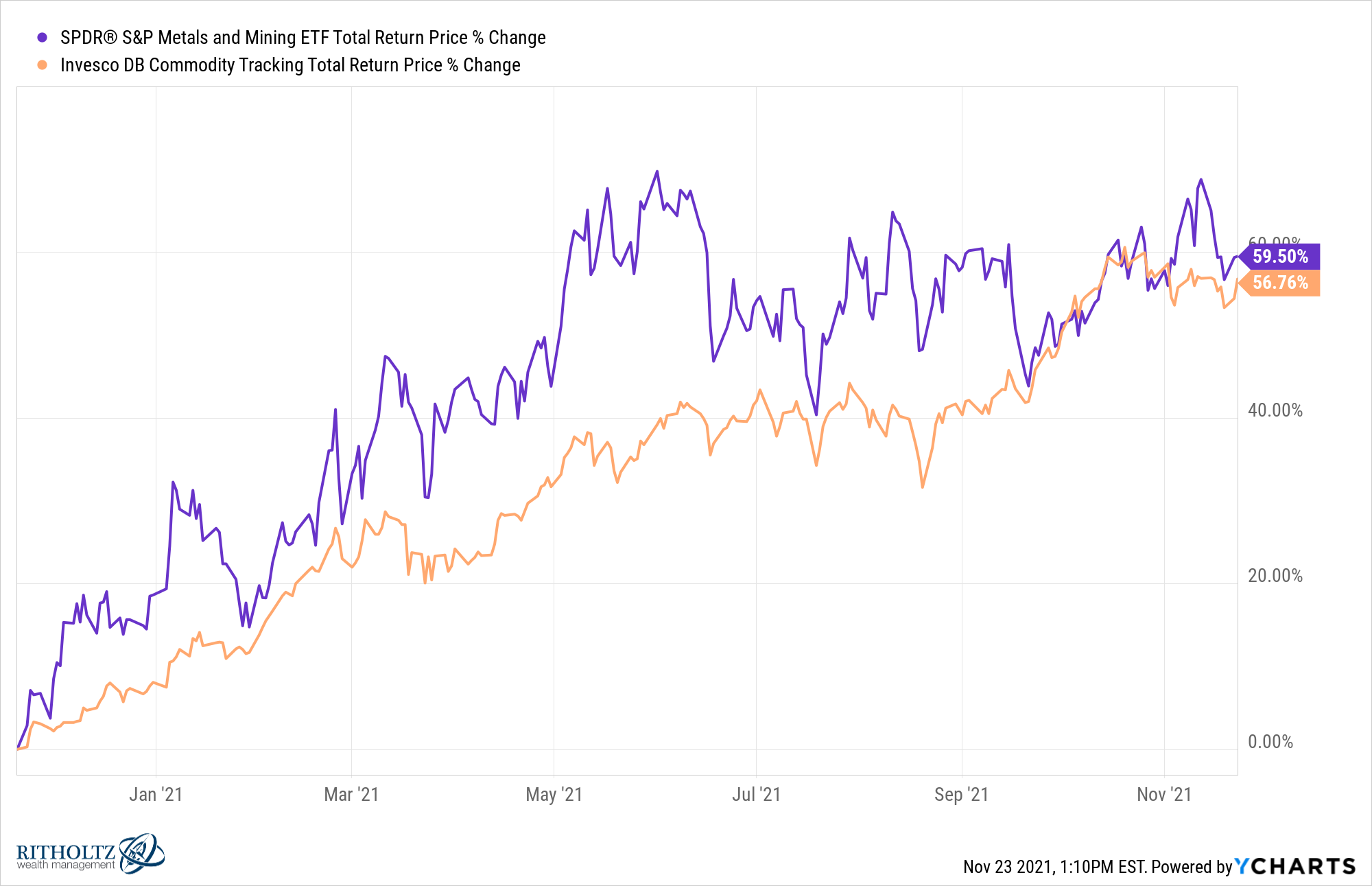 These commodity-producing companies are moving up in line with the commodities themselves. This is inflation doing its thing in the markets.

There are always other factors at play. All of the factors, sectors and strategies discussed here have underperformed for some time now. It’s possible the recession hit the reset button and allowed for some mean reversion to take place.

But you can’t dismiss the idea that inflation is a huge worry for investors at the moment. It’s been a long time since investors have had to invest in an inflationary environment like this.

The unanswerable question here for both inflation and the outperformance by these parts of the market is this:

How long will it last?