Marc Andreessen wrote one of the more prescient pieces of this century in the Summer of 2011 called Why Software is Eating the World. He laid out his reasoning behind the idea that technology is fundamentally changing the way we do business, likely for good:

My own theory is that we are in the middle of a dramatic and broad technological and economic shift in which software companies are poised to take over large swathes of the economy.

More and more major businesses and industries are being run on software and delivered as online services—from movies to agriculture to national defense. Many of the winners are Silicon Valley-style entrepreneurial technology companies that are invading and overturning established industry structures. Over the next 10 years, I expect many more industries to be disrupted by software, with new world-beating Silicon Valley companies doing the disruption in more cases than not.

He listed a number of reasons for his theory:

This new business climate has caused many in the investment management world to call into question their strongly held beliefs about the efficacy of fundamental analysis when valuing businesses. I’m not sure what probability I would place on this being true but it’s quite possible this new world could completely change the way investors are forced to evaluate corporations and their financial statements.

This puts traditional value investing squarely in the crosshairs of the technological revolution, which has caused many within the asset management industry to rethink how they go about building portfolios.

Its possible people are calling value investing into question simply because it’s underperformed growth investing by a wide margin for quite some time. This is the scorecard from March of 2009 using simple measures of value1 and growth: 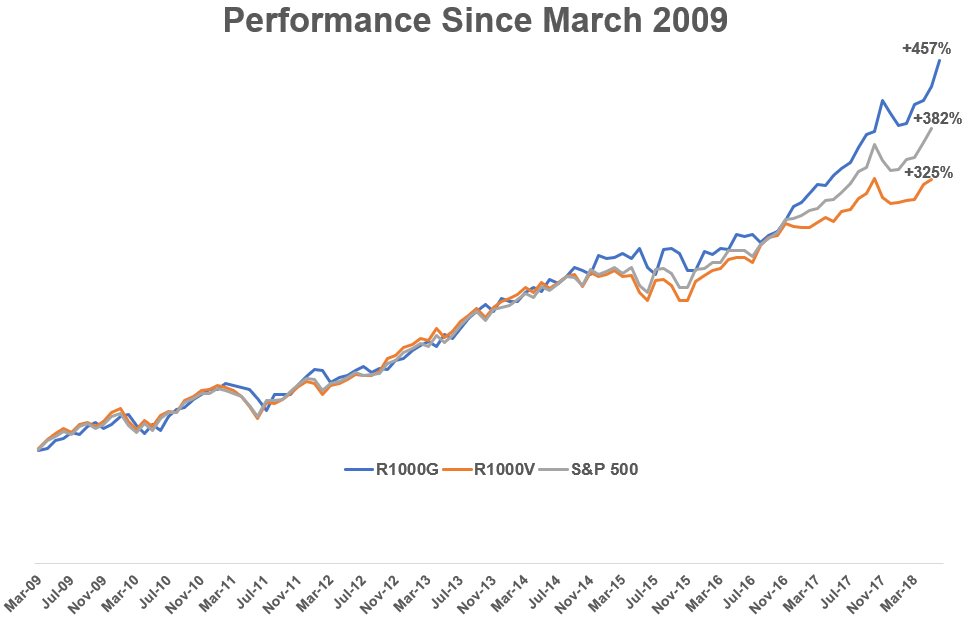 It’s much easier to call for a paradigm shift when things are going poorly than when they’re going swimmingly. But it’s hard to argue things haven’t fundamentally changed in the make-up of corporations because of technological innovation. This is not your grandfather’s stock market.

This chart courtesy of The Economist shows the enormous growth in intangible assets — things like patents, copyrights, franchises, goodwill, trademarks, etc. — since the 1970s in S&P 500 companies: 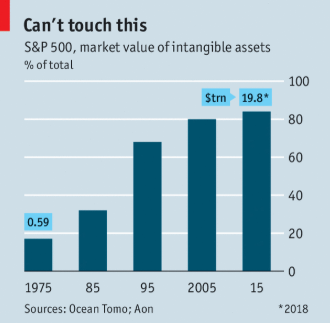 My friends at O’Shaughnessy Asset Management did a deep dive into how these balance sheet changes have impacted the stock market.

They broke the market into two groups:

This regime shift is relatively new as you can see from their chart in the growth of these groups:

The “veiled value” stocks are now worth more than the combined market cap of the FANG stocks (Facebook, Amazon, Netflix & Google).

Add it all up and it feels like I’ve been reading lengthy quarterly letters from value investing shops for the past couple of years who have completely called into question the usefulness of utilizing the income statement and balance sheet as investors have done in the past.

I have a bunch of random thoughts on this topic, so here goes:

No one has the answers to all of the questions I’ve brought up here which is why the best approach for me is to avoid thinking or acting in extremes when it comes to my portfolio. There are no rules that say you can’t have competing styles in your portfolio or your factor investing strategy. Relying on a single variable for performance purposes is an unnecessary and avoidable risk. One of the biggest benefits of being diversified is the ability to see the outperforming parts of your portfolio pick up the slack for the underperforming parts.

I don’t know if Amazon killed value investing but it seems like betting heavily, either way, would be a mistake.

1It’s worth noting that although value has underperformed both growth and the overall market, holding onto this style of investing would’ve still given any investor a much better outcome than sitting in cash for this entire recovery. This is why asset allocation will almost always be more important than security or strategy selection. And almost all of this outperformance has come since 2014. From March 2009 through the end of 2013, growth was +188% vs. +182% for value. Since the start of 2014, it’s been growth +94% vs. value +51%.