Following a vicious bounce off the March lows, investors spent much of the spring and summer debating why it was going up and when it would break through those lows yet again.

It had to be a dead cat bounce, right? How could the stock market possibly continue to rise in the face of a pandemic, millions unemployed and businesses shuttered? 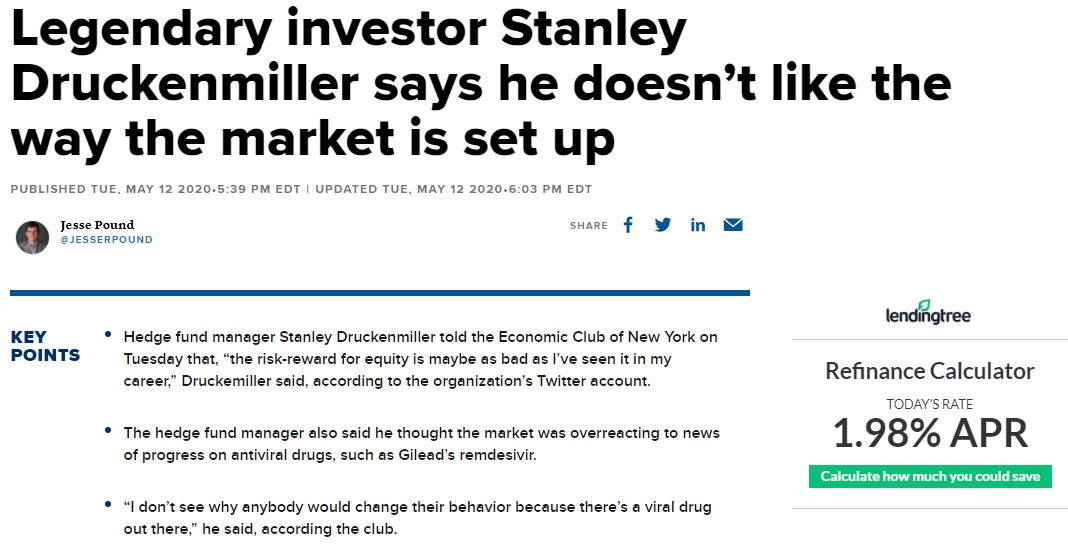 I don’t blame people for thinking this way. No one knew what to expect during a crisis like this. It’s been a scary, emotional, relentless ordeal.

But the stock market doesn’t care about feelings. It just keeps right on moving along, discounting the future. And in this crisis, during the biggest quarterly drop in economic activity in our country’s history, the stock market looked across the valley.

Yes, there was some help from the government but few, if any, predicted how much better things would get than the stock market.

The stock market was already at all-time highs by the time the vaccine hit the headlines. It predicted the vaccine!

Just think about some of the stocks are have been rocking for the better part of a year right now.

Live Nation sells tickets to concerts. I have no idea when live concerts will be here again but they will come at some point. Guess what? The stock market doesn’t care: 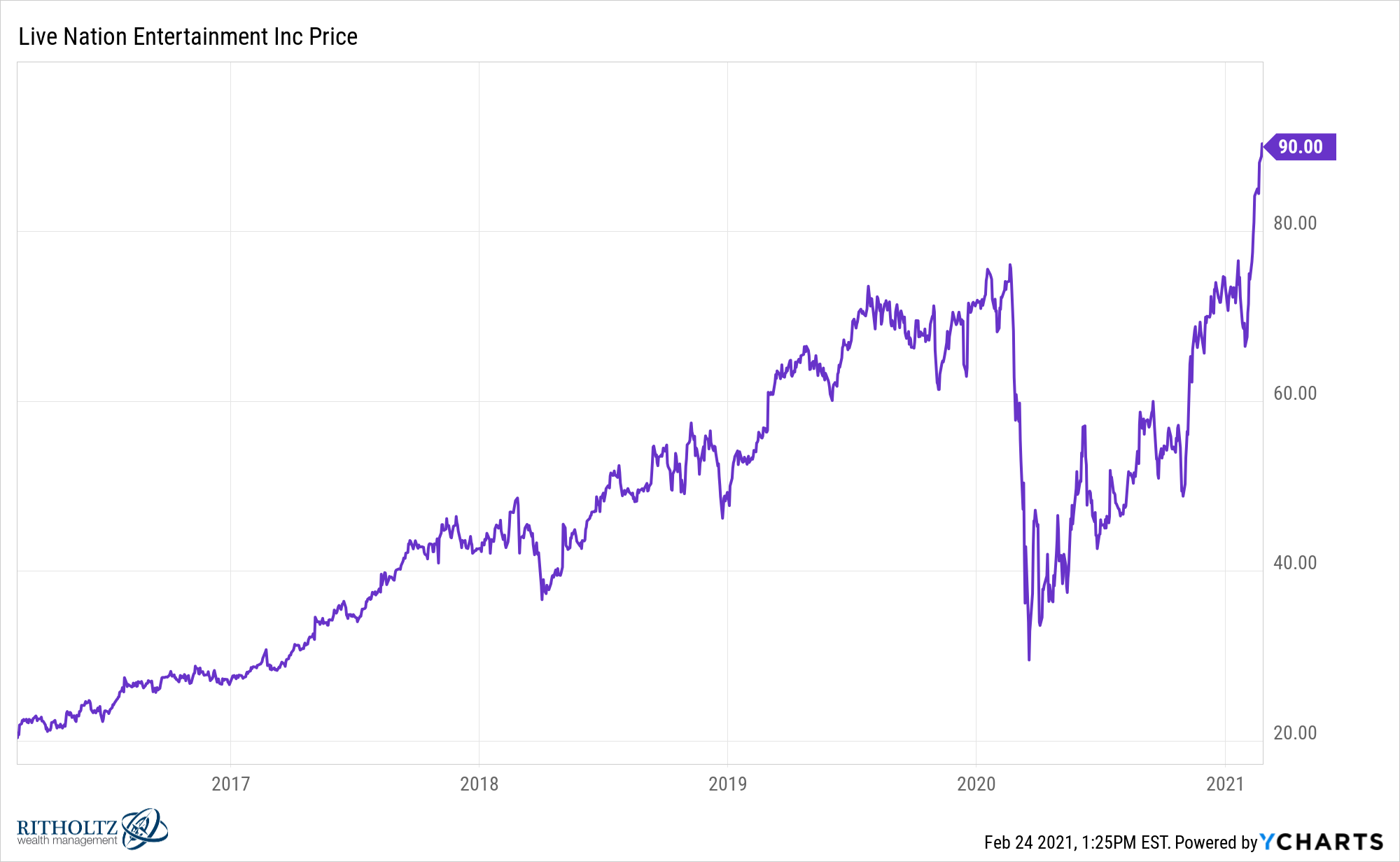 It’s already pricing in those concerts that people can’t wait to get back to. New highs.

How about Hilton Hotels? Sure, people are starting to travel more. But the stock market is pricing in everyone traveling again: 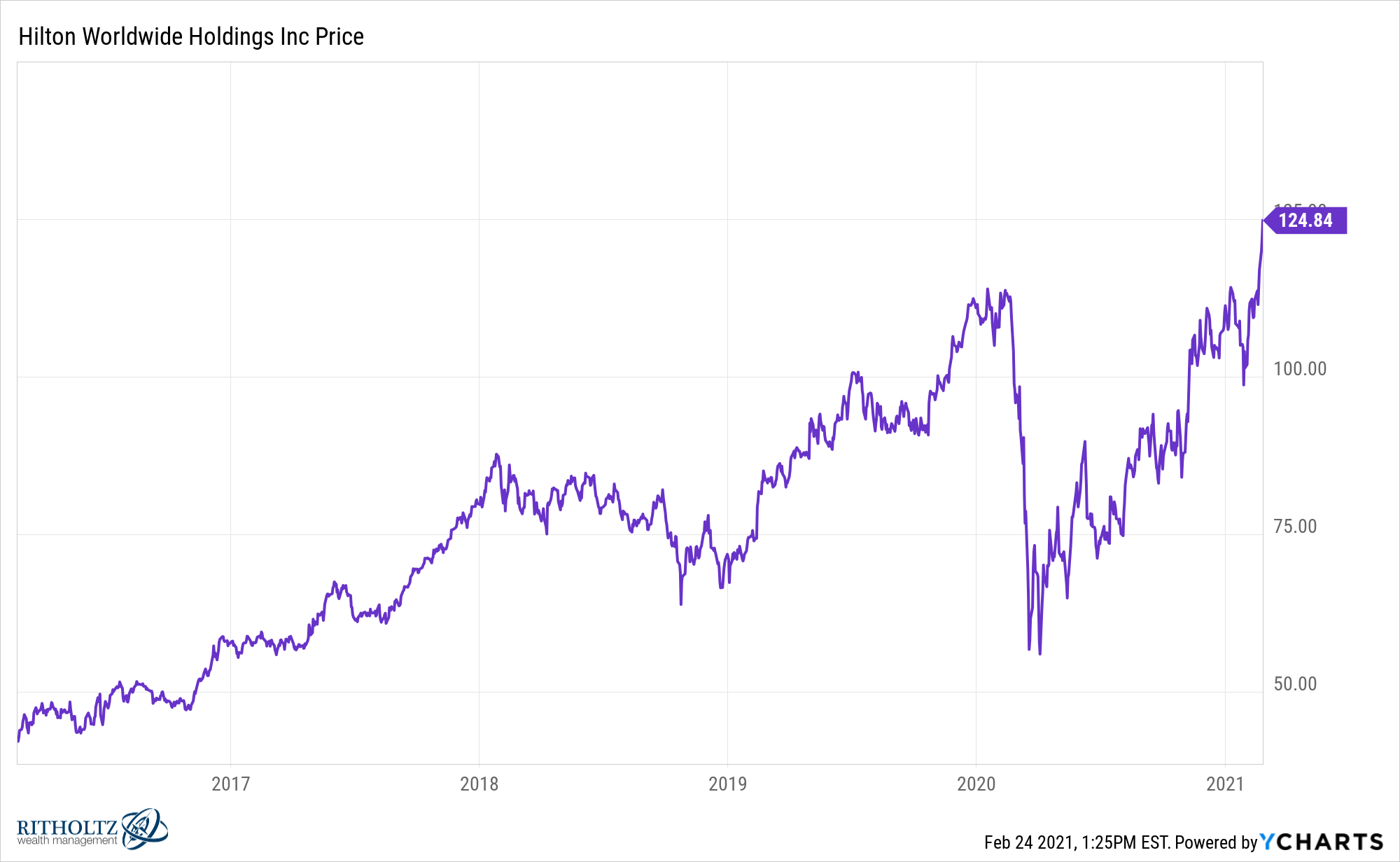 Disney made one of the great pivots of all-time for a huge corporation by moving into streaming but the company is also well-known for theme parks, cruise ships and resorts, all basically shut down or operating at minimal capacity for much of the past year.

The stock market has already priced in the re-opening and then some: 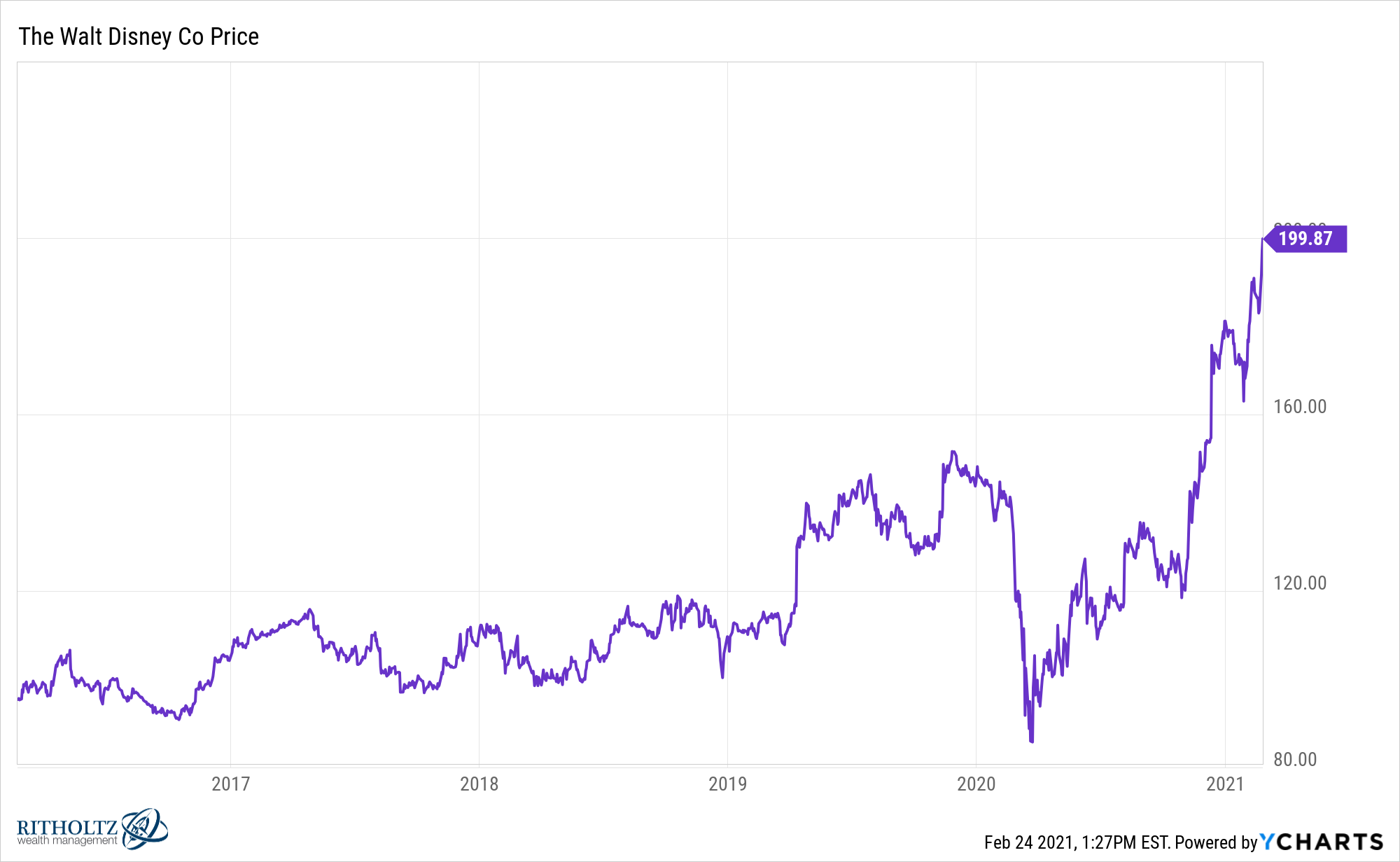 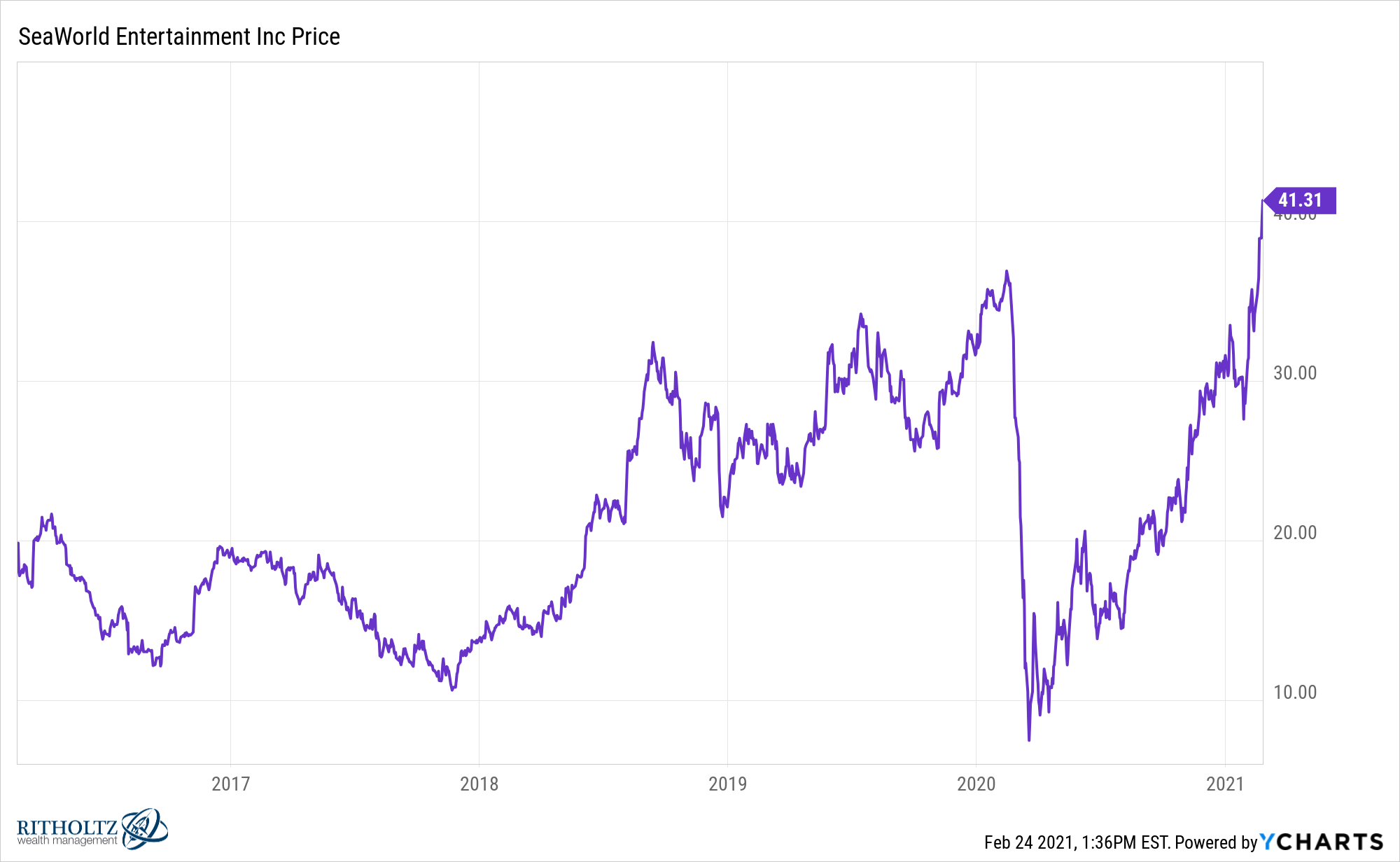 And you can see these companies began pricing this stuff in well before the results of the vaccine were verified and approved. We didn’t really know how long this was going to last or when it would get better but the stock market didn’t wait around for us to figure it out.

In Wealth, War and Wisdom, Barton Biggs writes about two of my most favorite historical topics: (1) World War II and (2) the stock market.

Biggs gives a blow-by-blow history of many of the turning points in the war through the lens of stock markets in various countries.

Many of those market moves seem completely counterintuitive:

On September 1, 1939, Hitler invaded Poland and Prime Minister Neville Chamberlain, his voice quavering, announced Britain was at war with Germany. The next day the New York Stock Exchange experienced a three-day mini-buying panic with a 20 point or 7% gain in the Dow. Volume was the busiest in two years as investors anticipated defense orders would create an economic boom.

We were on the brink of a second world war in 20 years yet investors remained optimistic.

The London stock market more or less predicted the United States would come along to help before it was too late:

The London stock market deduced in the early summer of 1940, even before the Battle of Britain at a time when the world and even many English despaired, that Britain would not be conquered. Stocks made a bottom for the ages in early June although it wasn’t evident until October that there would be no German invasion in 1940 and until Pearl Harbor 18 months later, that Britain would prevail.

It almost seems that throughout 1941 the London stock market intuitively sensed and responded to the growing and deepening alliance between Britain and the United States. It was more confident of America’s entry into the war than even Churchill. Certainly there was no good war news to celebrate because Britain was suffering defeat after defeat.

Even the German stock market got ahead of the fact that the tide was turning on Hitler before anyone else:

Similarly, the German stock market, even though imprisoned in the grip of a police state, somehow understood in October of 1941 that the crest of German conquest had been reached. It was an incredible insight. At the time, the German army appeared invincible. It had never lost a battle; it had never been forced to withdraw. There was no sign as yet that the triumphant offensive into the Soviet Union was failing. In fact, in early December a German patrol actually had a fleeting glimpse of the spires of Moscow, and at the time Germany had domain over more of Europe than the Holy Roman Empire. No one else understood this was the tipping point.

The war didn’t end until 1945 but the Dow bottomed in the spring of 1942 and never looked back: 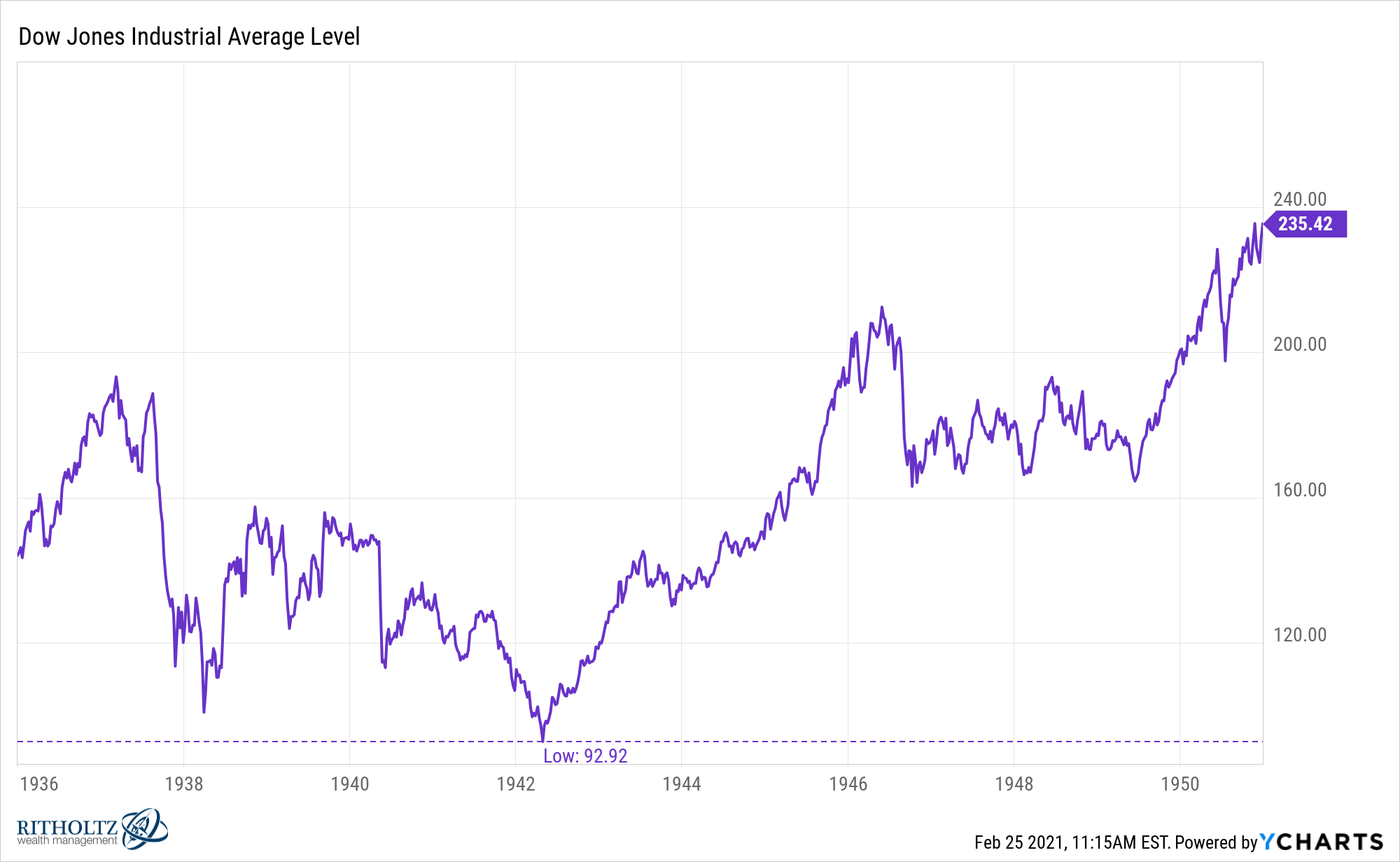 Biggs explains how prescient the stock market was in predicting this:

The New York stock market recognized that the victories at the battles of the Coral Sea and Midway in May and June of 1942 were the turn of the tide in the Pacific, and from the lows of that spring never looked back, but I can find no such thoughts in the newspapers or from the military experts of the time. A barrage of defeats and surrenders had engendered intense criticism of the management of the war and the commanders in the field. The wise men of the media were so busy wringing their hands that they didn’t grasp the significance of the battles of the Coral Sea and Midway as the high-water mark of Japan’s grand design for empire and of its attack on the United States.

In fact, the bottom that American stocks made in the second quarter of 1942 was really the end of the great secular bear market that began in 1929. A new secular bull market was born that spring that would last for almost 20 years and would take American stocks to unimaginable new highs in the burst of post-war prosperity. Of course there would be intermittent cyclical bear markets, but only the big, dumb, clumsy stock market somehow dimly understood that the long bear market was over and that a new era had dawned.

In The Wisdom of the Crowds, James Surowiecki writes: “The idea of the wisdom of crowds is not that a group will always give you the right answer but that on average it will consistently come up with a better answer than any individual could provide.”

The same is true of the stock market.

The stock market isn’t always right but it is amazing how much it’s right more often than it’s wrong.