In the summer of 2020, James Altucher wrote a story in the New York Post proclaiming New York City is dead forever.

He wrote this as a piece of outrage marketing. Outrage marketing is when someone makes an outrageous proclamation in the hopes of getting people riled up.

Jerry Seinfeld wrote a rebuttal. New Yorkers were angry. It feels like once a week I see someone on social media post a story about New York’s comeback side-by-side with Altucher’s headline. Well over a year later and people are still talking about his story.

The internet is fueled by outrage so this strategy works wonderfully in the social media era.

I’m always surprised about the topics that cause outrage in the world of finance. One of them is budgeting, especially when it comes to people who make a lot of money.

The classic example of this is this CNBC piece that seems to resurface once every six months or so. The author makes the case that earning $400k a year in a high cost of living area like NYC, San Francisco, LA, etc. essentially makes you middle class: 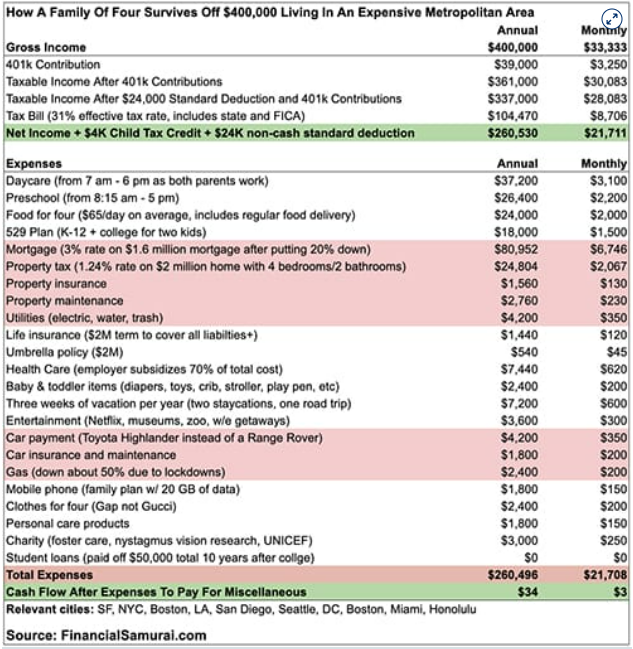 This one always gets people up in arms.

On one side you have people pointing out the fact that earning $400k a year puts you close to the top 1% of income earners in the United States.

On the other side you get people who live in high cost of living areas who defend the premise, based on the fact that it’s really expensive to live in these cities.

And then you have the people who go line-by-line to point out their problems with some of these spending assumptions.

There’s something for everyone.

Last weekend I saw another budget going viral on Twitter that people were non too pleased with: 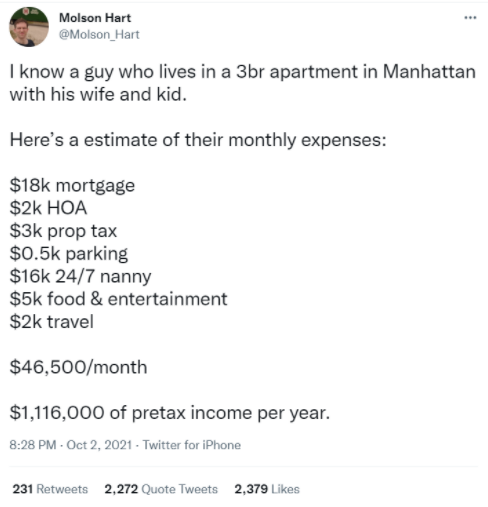 People were so angry with this guy for sharing this information.

This payment would be for a mortgage of more than $4 million!

How many people have almost $25k a year budgeted for travel?!

I get why people get mad about this stuff. Normal people are never going to feel sorry for someone that makes a ton of money and then spends most of it.

Rich people have never had it better than they have it today so I understand where the outrage comes from in these instances.

But there’s also a psychological component to seeing someone else’s budget that can trigger people.

Some people never bother creating a budget. Others have no idea how much they spend each month. Some people are ashamed of their spending habits. Others track every receipt down to the last penny.

The thing is there’s probably something on everyone’s household budget that would make others cringe if it was made public. A budget is like your internet search history. You don’t want that getting out.

They spend how much a month on their car?

They paid how much for that house?

How can they possibly afford a boat?

Did you see she had another designer bag this week?

We all have stuff like this because no one teaches you to spend money wisely. You’re on your own.

Budgets are also personal. They say a lot about your priorities, how you spend your time, the stuff that’s important to you and what kind of lifestyle you have.

That’s why they can create a sense of outrage, no matter how big or small they are.

Michael and I discussed this wild budget and much more on this week’s Animal Spirits video: