I still remember the first time I saw a camera phone up close and personal.

It was my senior year in college all the way back in 2003. It was the first day all of my friends and I had seen each other since summer break. One friend was all excited to show us his new flip phone with a brand new feature — the ability to take pictures.

He thought it was amazing. He wanted us all to get a phone just like his so we could all take photos and text them back and forth. The technology was still primitive but this was the first aha moment for me.

I wanted nothing to do with it.

I was young and dumb. We were always going to bars and parties and making fools of ourselves. I didn’t want to sign up for the ability to take and share pictures of that time in my life.

I am so thankful I didn’t grow up with social media.1

Not to mention the ability to witness social events you weren’t invited to, friends talking smack about you, people sharing photos or videos of you without your approval or complete strangers having the ability to comment on your words or actions.

I dodged a bullet.

Unfortunately, my kids are going to be growing up in a world of social media. This is slightly terrifying, especially after reading this Wall Street Journal piece this week about the internal research from Facebook and Instagram:

“Thirty-two percent of teen girls said that when they felt bad about their bodies, Instagram made them feel worse,” the researchers said in a March 2020 slide presentation posted to Facebook’s internal message board, reviewed by The Wall Street Journal. “Comparisons on Instagram can change how young women view and describe themselves.”

For the past three years, Facebook has been conducting studies into how its photo-sharing app affects its millions of young users. Repeatedly, the company’s researchers found that Instagram is harmful for a sizable percentage of them, most notably teenage girls.

They came to the conclusion that some of the problems were specific to Instagram, and not social media more broadly. That is especially true concerning so-called social comparison, which is when people assess their own value in relation to the attractiveness, wealth and success of others.

“Social comparison is worse on Instagram,” states Facebook’s deep dive into teen girl body-image issues in 2020, noting that TikTok, a short-video app, is grounded in performance, while users on Snapchat, a rival photo and video-sharing app, are sheltered by jokey filters that “keep the focus on the face.” In contrast, Instagram focuses heavily on the body and lifestyle.

The features that Instagram identifies as most harmful to teens appear to be at the platform’s core.

The tendency to share only the best moments, a pressure to look perfect and an addictive product can send teens spiraling toward eating disorders, an unhealthy sense of their own bodies and depression, March 2020 internal research states. It warns that the Explore page, which serves users photos and videos curated by an algorithm, can send users deep into content that can be harmful.

“Aspects of Instagram exacerbate each other to create a perfect storm,” the research states.

I have two girls. I pray they aren’t subjected to this as they age.

Now, this is not all Facebook’s fault. A lot of this is human nature. But platforms like Instagram are obviously adding kerosene to the fire.

On the other hand, Facebook has billions of users and is one of the biggest companies in the world.

I’m a generally optimistic person so I don’t tend to openly root against specific people or companies. But having kids who could some day be impacted by these sites, I hope Facebook gets knocked down a peg.

History shows this is a possibility.

Bespoke recently compared the biggest stocks in the S&P 500 now versus September 2011: 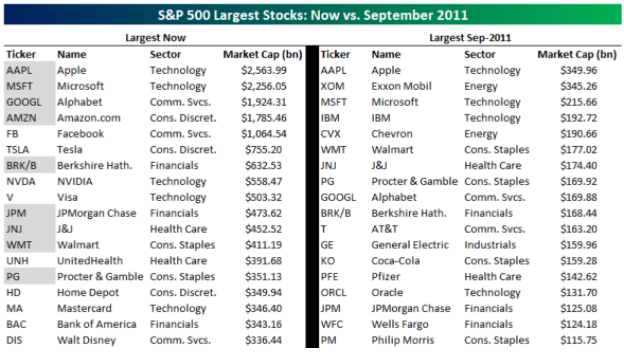 From this list you can see there is turnover of 50% in the top names from one list to the next.

I’ve taken a look at this data going back even further in the past:

As recently as 2015, there was no Tesla or Nvidia in the top 10 and the big tech names were a much smaller percentage of the overall pie.

It’s possible the tech stocks will continue to dominate the top ranks of the stock market for years to come. I wouldn’t rule it out.

But if history is any guide, there will either be some new companies that outpace the leaders or some of these huge corporations will falter.

I suppose people could come to their senses and stop using it once they realize how harmful it can be but I’m not holding my breath on that one. These platforms are addicting. Billions of people log on every day for a reason.

The government could also break up the big tech stocks but I don’t see how breaking up Facebook and Instagram would solve any of the problems. People could still use the services if they were split up.

Hopefully the young kids that grow up with this stuff in their lives will choose to try something different. Fingers crossed.

Michael and I discussed the biggest stocks and which ones we think could be in trouble in the future on this week’s Animal Spirits video:

1In fact, I didn’t get my first cell phone until my senior year of college.