Business Insider had a story this week proclaiming the death of the starter home.

Here’s the gist of the argument:

That chart, using data from the Census bureau’s monthly report on new home sales and prices in the US released on Tuesday, shows that while over half of new homes sold in 2002 were priced at under $200,000, only about 2% fell in that range in July 2021. Meanwhile, the share of new homes selling for over $400,000 has steadily risen, with nearly half falling in that bracket last month.

Homebuilders aren’t making new houses that sell for $200k or under anymore. Thus, the starter home is dead.

At first glance, it would be hard to argue with this conclusion. After looking under the hood, my conclusion is somewhat more mixed.

I decided to dig through the numbers myself with some help from Federal Reserve data.

This is the proportion of new houses sold in the United States going back to 2002 broken out by various price points: 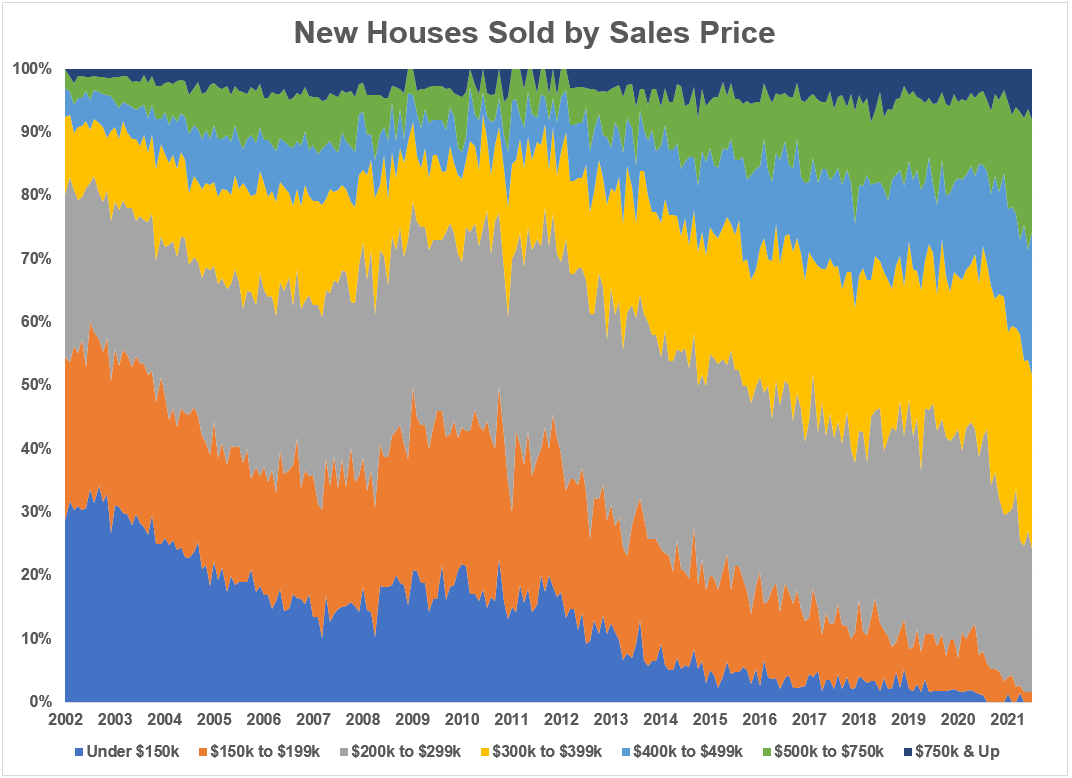 There is an obvious trend of new homes being built at higher price points.

There are a few explanations for this trend.

For one, there were simply more houses being built back then. Here is the same breakdown by price point but instead of the proportion of total houses sold, this one shows the absolute number of new homes built: 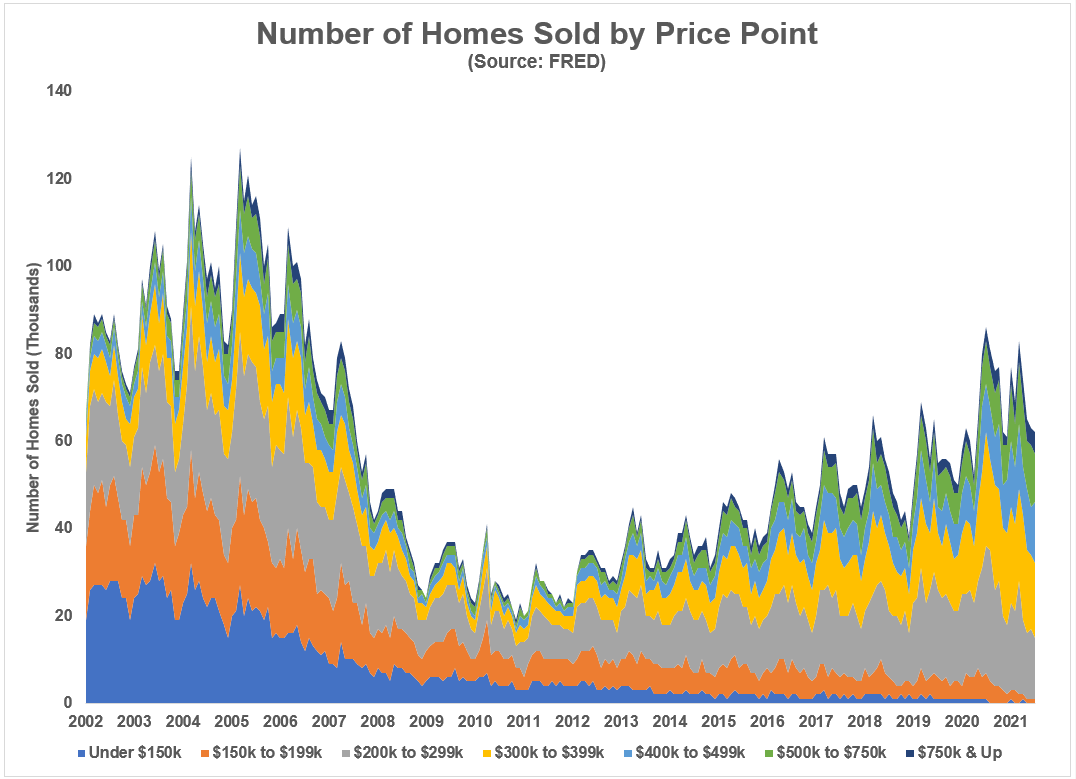 This number is finally creeping higher but it is still well below the early 2000s boom.

What if the number of starter homes being built back then had more to do with the housing bubble than anything? What if that period was the outlier?

The higher price point for new homes is also being driven by the experience homebuilders had following the housing market crash. Builders went overboard in the housing bubble and were left holding the bag. There are still lingering scars.

It makes sense homebuilders have moved up to higher-priced homes that have better margins and buyers with higher credit scores.

If you want an affordable new home it may have to come in the form of a rental built by an institutional investor (listen to our podcast with Fundrise CEO Ben Miller for more on this trend).

There’s also a huge factor at play that we simply can’t ignore in this equation — mortgage rates. 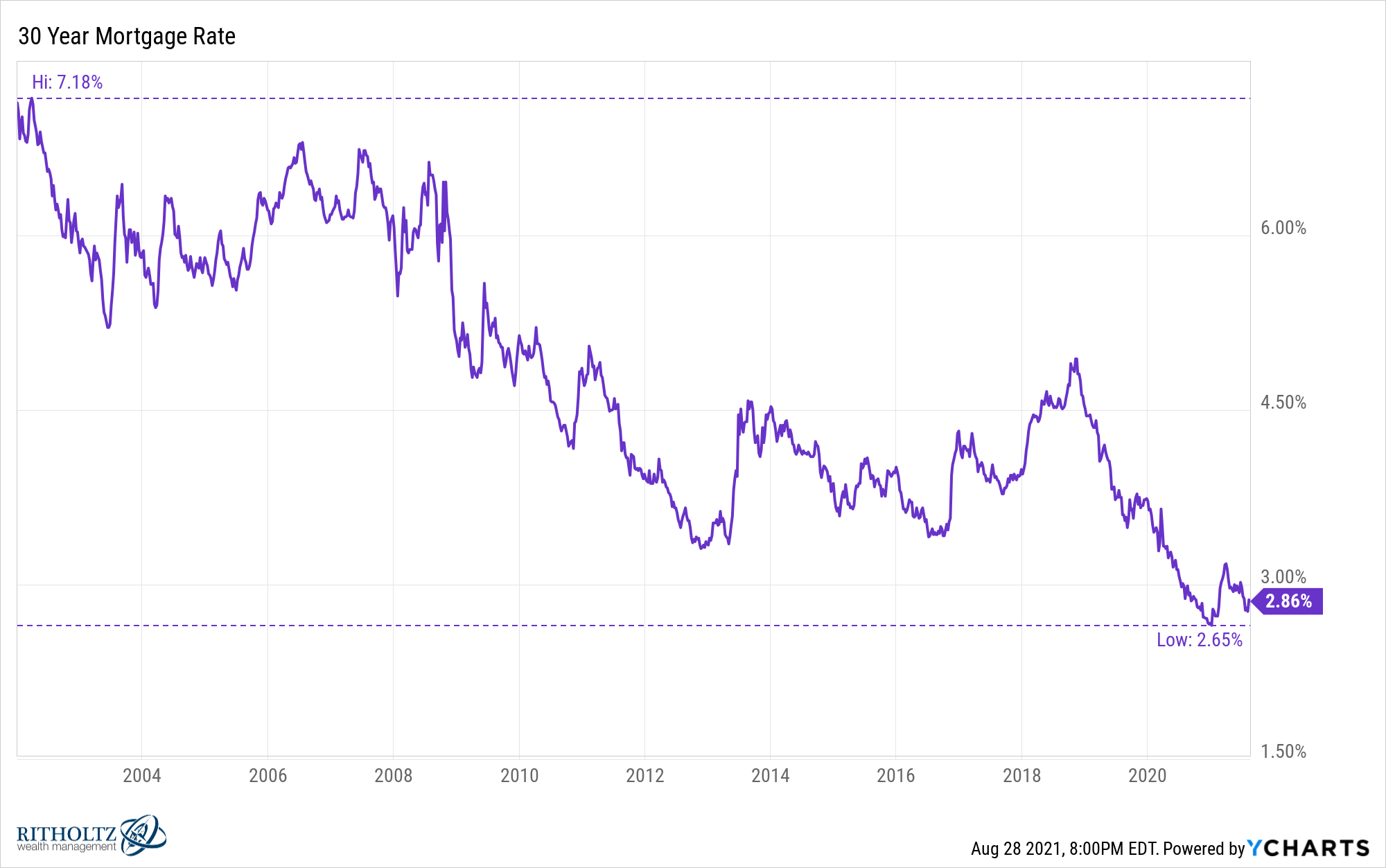 I hate to play this card every single time1 but let’s adjust the monthly payments by interest rates to see how much that changes things.

The average 30 year fixed mortgage rate in 2002 was 6.5%. This year the average is 2.9%. This makes an enormous difference in monthly payments: 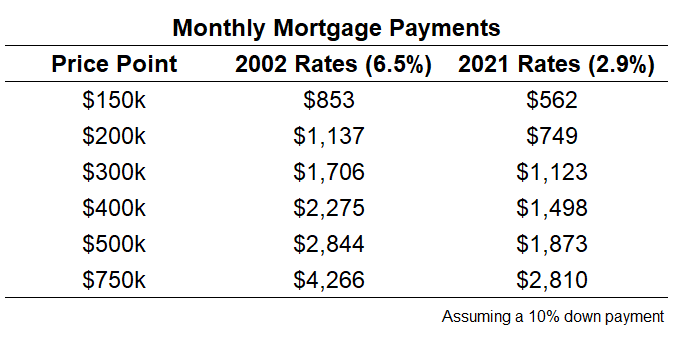 Monthly payments are almost 35% lower at today’s interest rate levels versus the rates in 2002.

Of course prices are going to be higher!

Rates have allowed buyers to move up their price points. Yes, taxes and down payments are higher too but lower mortgage rates have allowed homebuyers to build pricier homes with little-to-no inflation in their monthly payments.

Add in fewer homes being built, a touch of inflation, scarred homebuilders, HGTV messing with our expectations and it’s no wonder new home sales prices have risen over the past 20 years.

This doesn’t necessarily mean the starter home is dead. It just means those looking for a new starter home at lower prices are going to have to adjust their expectations.

And they’re likely going to be buying an existing home rather than a new build.

1Actually I love playing this card every time.