I’ve been reading Bill Bryson’s A Short History of Nearly Everything and it’s the kind of book that forces you to realize just how little you truly know about the world.

This hurts my brain to even consider.

Or how about the stuff we’ve learned only in recent generations that the vast majority of humans that came before us never knew about.

The first dinosaur bone wasn’t discovered until 1787. So our country is older than our knowledge of dinosaurs.

It wasn’t until 1980 that scientists figured out it was a meteor that killed the dinosaurs 60 some-odd million years ago.

Remember learning about the earth’s crust, mantle and core in middle school? This is still a relatively new concept:

It is fairly remarkable to think that Ford has been building cars and Nobel committees awarding prizes for longer than we have known that the Earth has a core. And of course the idea that the continents move about on the surface like lily pads has been common wisdom for much less than a generation. “Strange as it may seem,” wrote Richard Feynman, “we understand the distribution of matter in the interior of the sun far better than we understand the interior of the earth.”

Bryson’s book first came out in 2004 so I’m sure even some of the data he cites in it has been updated since it was published.

I’ve also been thinking about what we don’t know about life after the pandemic. Here are some things I don’t know:

Are retail traders here to stay? The surge in retail trading volume is nuts: 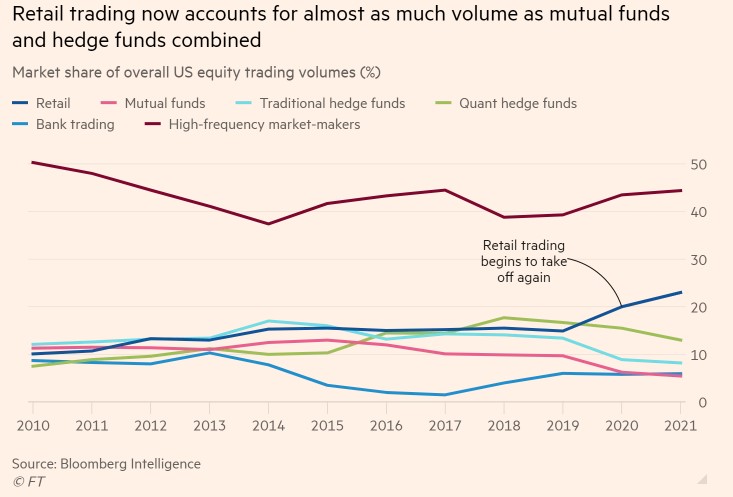 Is this here to stay? Have we pulled forward new user adoption for products like options? Are more people interested in investing than ever?

Or will this slowly fade away once everyone is vaccinated, more people are back in the office and people have more stuff to do?

Are we all going to live our lives online now? Ready Player One 1 was a great book but it was also kind of depressing. It was this dystopian future where everyone basically lives online in the metaverse or whatever you want to call it.

The characters were all more interested in the features of the virtual world than they are in real life.

Is it possible the pandemic has pulled forward so much technological demand that more and more young people are going to prefer online life to the real world? Isn’t this the bull case for NFTs and the digitization of everything?

Are we heading for a world like Surrogates with Bruce Willis?

Or will people be so ready to get back to the real world after a year of living most of their life online?

Are faster corrections here to stay? Last year the S&P 500 had its faster 30%+ bear market from all-time highs in history. The Nasdaq just experienced one of its fastest corrections in history in recent weeks.

These losses were followed up with violent snapback rallies.

Is this the world investors are going to be living with for a while? Forever?

Technology is speeding up cycles in everything. What if faster markets, to the upside and the downside, are now a feature of an interconnected world?

What if we don’t get inflation? I know, I know, inflation is really 10% per year and I’m blind to this fact. But what if we don’t see runaway inflation like all of the newsletter people have been predicting since the end of the 1970s?

What if all of this government spending only shows up in certain areas like vacations, concerts and restaurants? Or what if some of it finds its way into the stock market again? What if companies can right their supply chain problems in the coming year?

If you think $1.9 trillion is a huge price tag just wait to see what happens during the next recession if we don’t get an extended period of above-average inflation. The current spending binge is going to look tiny by comparison.

Can the stock market crash during an economic boom? This is the big worry from the potential for rising inflation and rates. What if we overdid it?

But has that ever happened before?

Can you remember a time when the economy was booming but the stock market sold off?

I’m doing the research on this as we speak and it’s quite rare for the stock market to experience losses while the economy is in the midst of above trend growth. The only serious market sell-off I could find historically when this happened was the crash of 1937.

Stay tuned for more on this.

Growth or value or both?  Now that it looks like we’re in the midst of a huge economic recovery with more government spending on the way, it would make sense that value stocks should outperform growth stocks, at least for a while.

But how can you possibly bet against tech stocks right now when it appears these companies will be taking over the world?

Or is it possible investors lost their minds and simply pulled forward returns and valuations for tech stocks got out of hand because of the pandemic?

Michael and I discussed this conundrum and more on this week’s Animal Spirits video:

1The book was 10x better than the movie.