Every time I write about the current inflation rate or the possibility of higher inflation in the future, invariably a handful of people will comment about how high inflation is already here.

Are you serious?! Have you been to the grocery store lately?! What about the price of real estate or asset price inflation?

First of all, there is a 0.98 correlation between people who use the phrase “asset price inflation” and someone who is wrong about the markets or monetary policy.

Asset price inflation is not a thing. Risk assets generally go up over the long-term. The same is true of most real estate. In fact, that’s one of the biggest reasons to invest over the long-term — to beat inflation and keep up with or improve your standard of living.

Second of all, anecdotal price increases do not mean government statistics are somehow masking the true nature of inflation.

This is simply a case of the availability bias, where people assume things that easily come to mind are more representative of the truth than they actually are.

Here is the reported inflation rate: 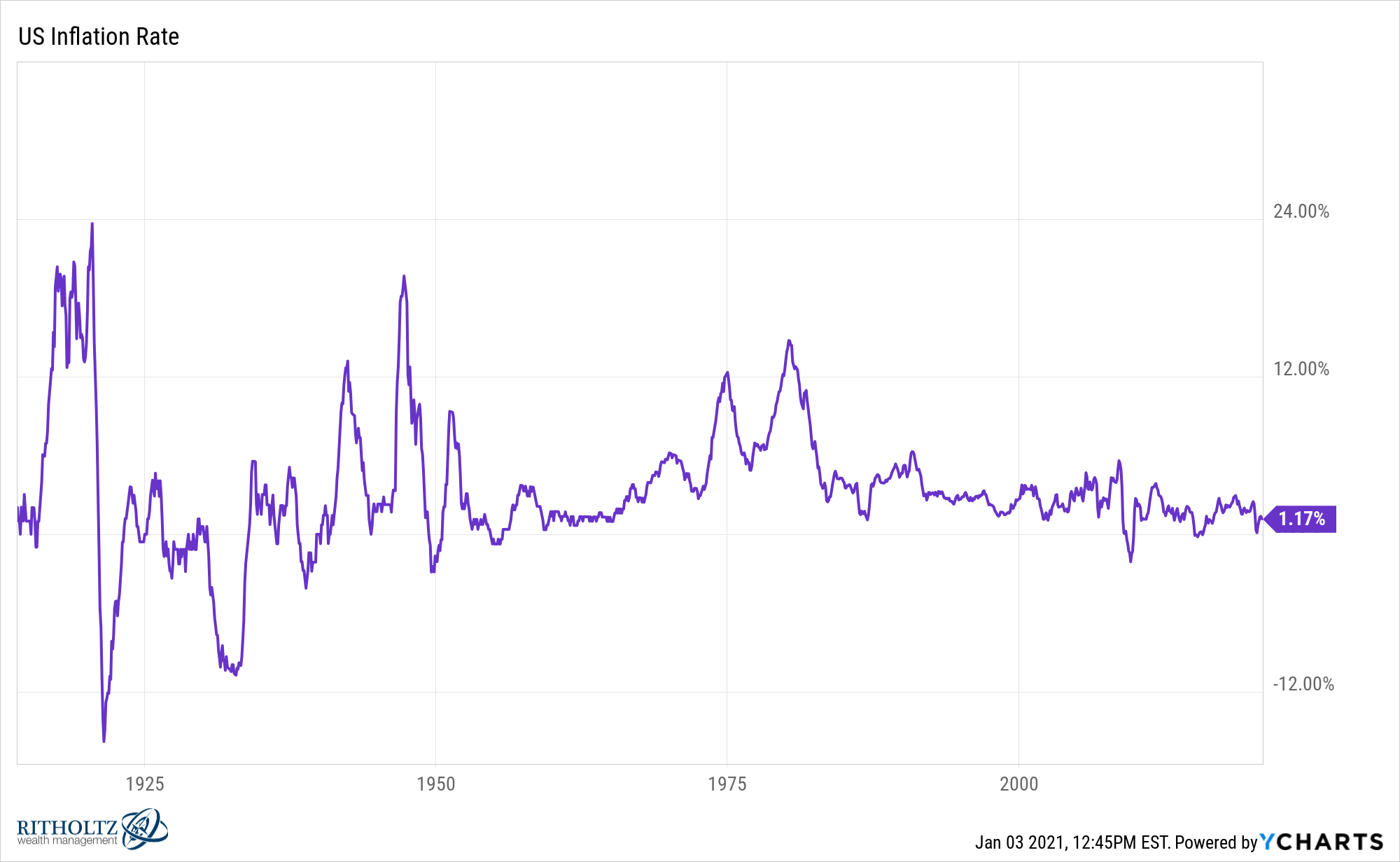 Could it be a tad higher than this number? Sure. Multiple times higher? No.

To be fair, tracking and measuring inflation is much harder than it sounds.

It’s so difficult to measure, some people think the actual inflation rate since the 1970s could be overstated. Check out this video by Russ Roberts that does a nice job of explaining why it’s often so difficult for people to understand the true nature of price changes:

You may have seen this 1991 Radio Shack ad shared somewhere on the Internet in the past: 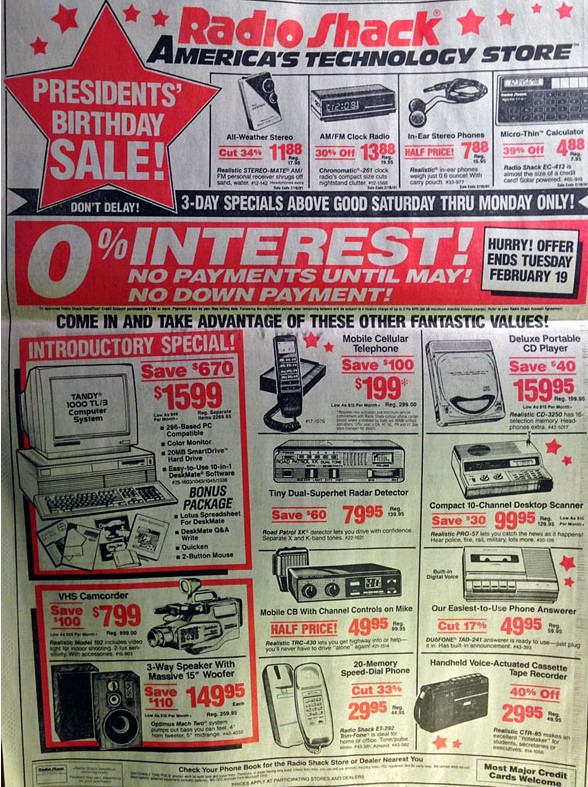 It shows everything you would have had to buy back then that can now be done with your iPhone:

I still remember the first time I saw one of my friends with an iPod in the early-2000s as I lugged around a ridiculously large compact disc player and my book of CDs. I was instantly jealous.

You used to have to go to the mall to buy a CD. Now every new album is on your iPhone the instant it comes out.

This past weekend I scrolled through the video library for HBO Max. For the monthly price of a single DVD, I now have access to their library of thousands of movies and TV shows.

Few people consider how amazing these deals are for consumers or how much better things are today than they were in the past.

Or think about how the quality of certain goods has improved over time even at higher prices. Remember the old horror movies where a person was running from a serial killer but they couldn’t start their car? There’s no way that would happen today because the quality of automobiles has improved so drastically.

Look at the improvement in gas mileage over time: 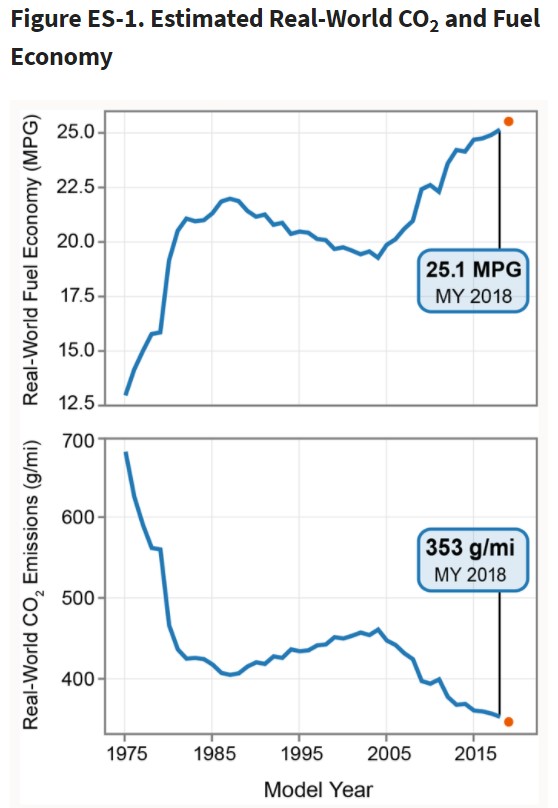 Cars last longer, require less fuel to operate and are better for the environment.

Of course, these are anecdotal observations just like the people who cite the grocery store price data.

How about input prices?

The Bloomberg Commodities Index sits below where it was in 1991! 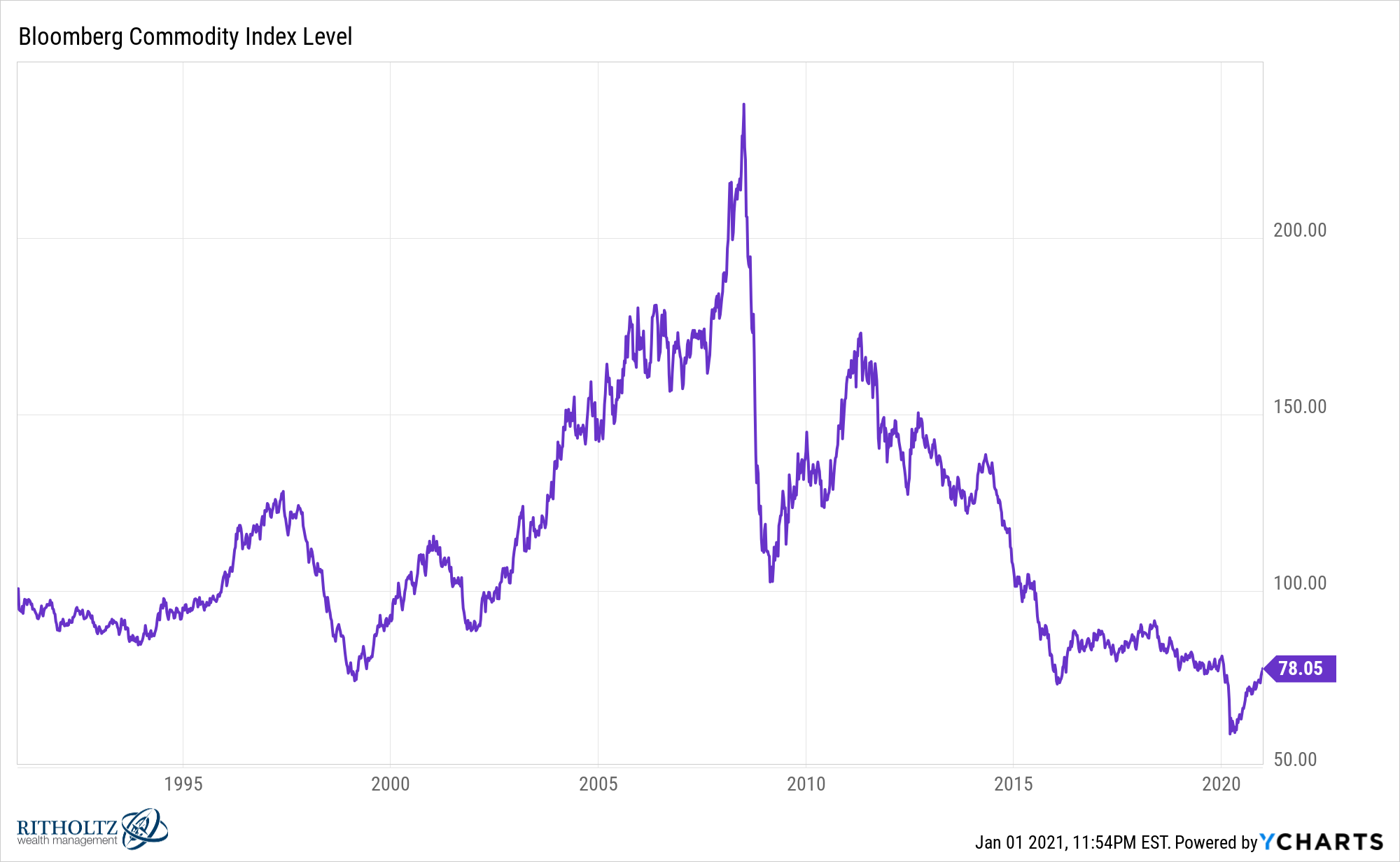 These are observable input prices for commodities used to produce goods in the economy, not just anecdotal prices.

And if that’s not enough for you the simplest way to bust the silly inflation myth is by looking at the economic growth numbers. 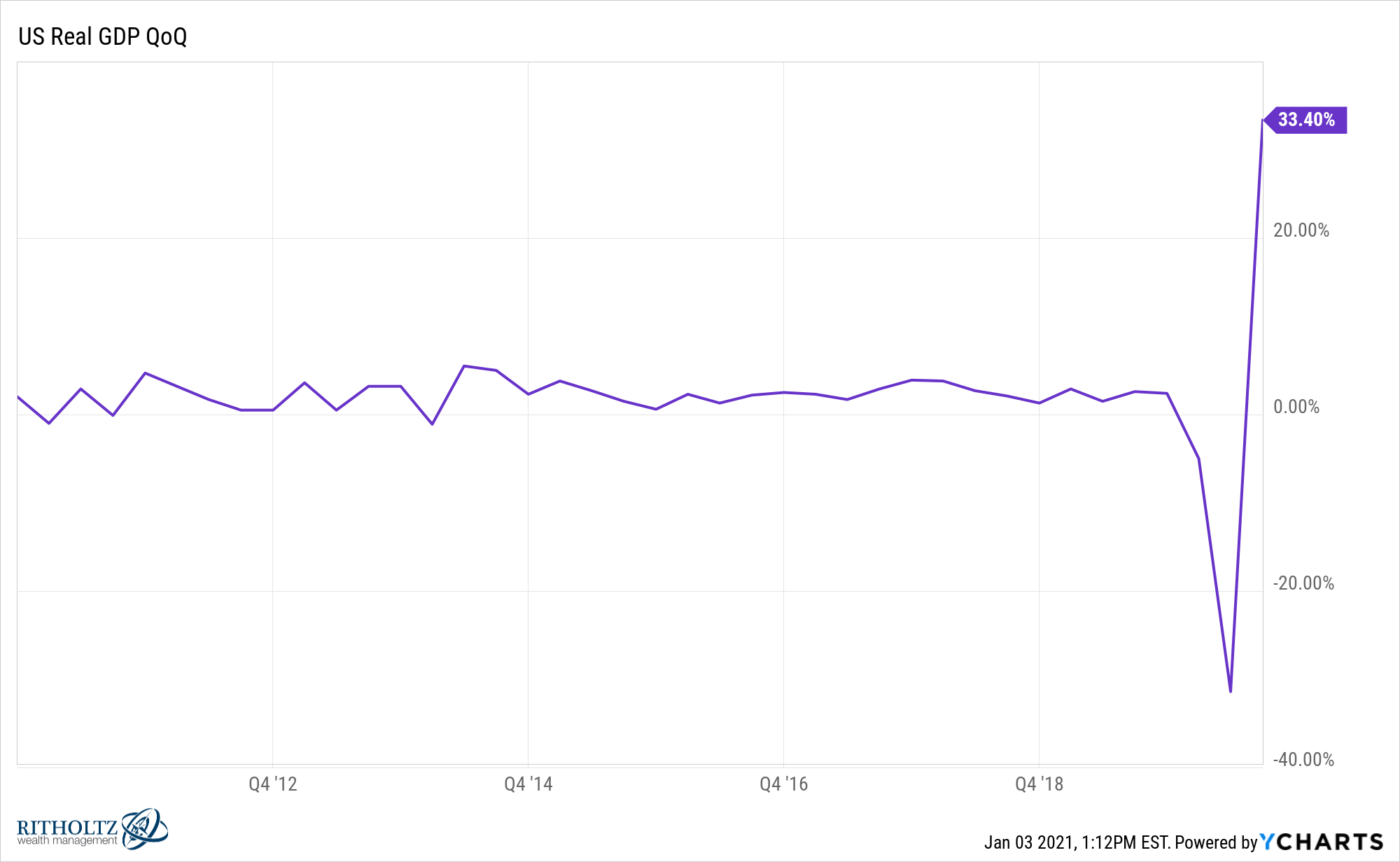 Unfortunately, the pandemic has permanently broken every economic chart in existence.

If you’re one of the conspiracy people who believe inflation has actually been running at 5-6% per year, that would assume the economy has been contracting by 1-3% per year over the past 10 years.

And if you’re a full tinfoil hat person who assumes inflation is actually 10-12% per year2, that’s like saying we’ve been in a full-blown depression and the economy has lost 80% of its value.

This is absurd and patently false but that’s the claim you’re making if you really think inflation is this high.

The United States actually had runaway inflation in the 1970s when it averaged around 7% annually. But nominal GDP was running at more than 10%because of this. Wages grew nearly 150%. This is what happens when there’s inflation.1

There are areas where prices have risen further than the average for the simple reason that this is how averages work.

One of those areas is healthcare. This is the one I sympathize with the most. For certain households, the cost of healthcare feels like it’s experienced hyperinflation. 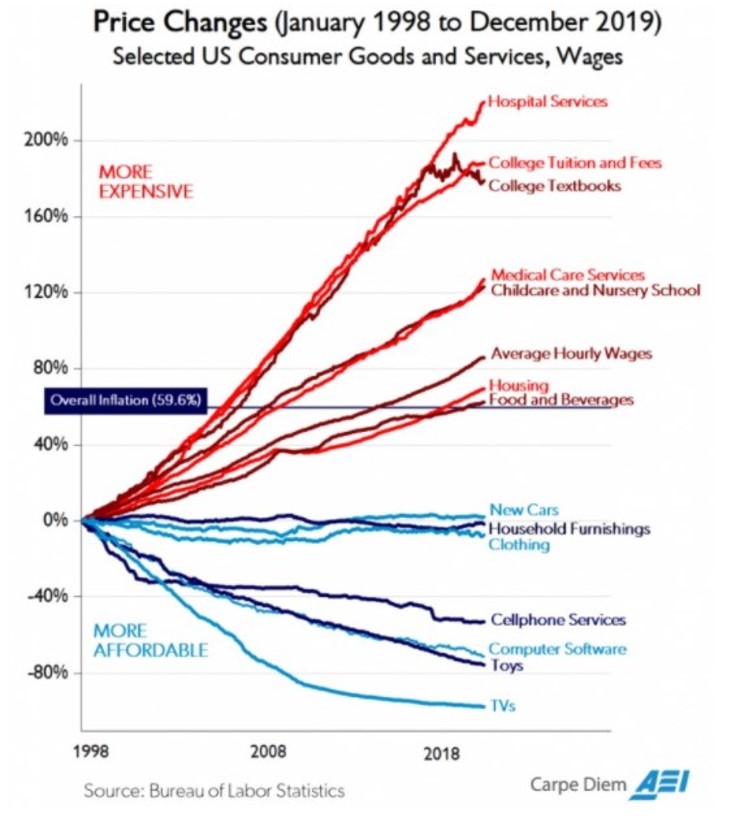 Another is college tuition. But it’s worth remembering that just 30% or so of the population even has a college degree. It’s not like everyone is being forced to pay for that higher tuition.

And tuition rates rose roughly 180% from 1998-2019. That’s an annual rate of 4.8%, much higher than the reported inflation numbers but well below the conspiracy numbers.

Housing is another place with observable price points.

Jake from EconomPic calculated the change in housing affordability since 1971. He discovered the average inflation-adjusted monthly mortgage payment on a new home has basically remained the same for the past 50 years (despite the fact that the average new home is 70% larger than one from 1971): 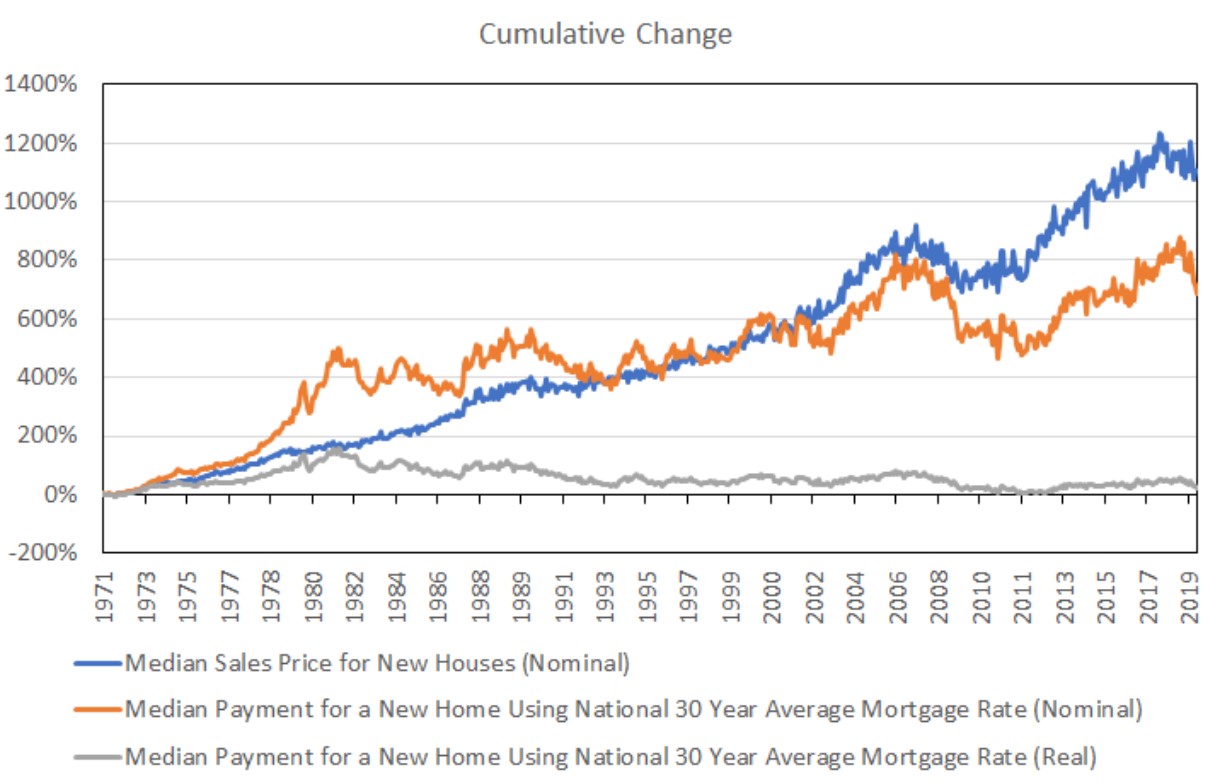 And this data is from the summer of 2019. Housing prices have risen since then but rates have continued to fall.3

Of course, there are areas of the country where housing prices are out of control. But this is how averages work. Some data points are above average while others are below average.

The same is true of the inflation rate.

There are certainly households that feel the sting of rising prices more than others. And there are those households where people don’t realize how much their standard of living has improved over time because we become accustomed to the deflationary forces of technology.

The government isn’t suppressing the “actual” inflation number. And if they were, they would also be suppressing reported economic growth which is something no politician in their right mind would ever do.

Inflation is a tricky concept to understand but that doesn’t mean you should listen to the inflation truthers.

Further Reading:
Why Your Paycheck is Probably Lower Than It Should Be

2There are actually people who believe this.

3Yes the down payment is higher but interest rates are lower in part because inflation is lower and it makes the monthly payment much more reasonable than most people believe.