Some lessons from a crazy year in the markets:

Investing when things look bleak remains a profitable strategy. I had a number of conversations in March, April and May where people asked, “How could the stock market possibly not get worse? Just look at what’s going on all around us.”

We all spent a lot of time debating how in the world stocks could continue rising in the face of a worsening pandemic and employment picture.

Here’s a table from my first book:

It’s counterintuitive that the best returns would come from investing when the economy is getting body-slammed but being uncomfortable when investing is typically a good sign.

Maybe the stock market is smarter than all of us. During the bear market it sure felt like stocks could fall 50-60% before all was said and done.

We’ve never lived through a pandemic like this before in modern times. Who knew how bad things could have gotten?

Just think about how many brilliant people decided to play it safe and wait for a retest of the lows after stocks bounced.

I’ll just get back in when the dust settles.

Guess, what? By the time the dust settled it was already too late.

By the time the vaccine got here we were already back at all-time highs.

The stock market basically predicted the vaccine. It looked over the valley.

The collective opinion of investors doesn’t always get it right. But the stock market proved a lot of people wrong this year.

If it’s in the headlines it’s too late. If you had early access to the news headlines before the year began there’s no way you would have predicted how the markets reacted.

A global pandemic that causes stay-at-home orders and the closure of thousands of businesses, schools and workplaces.

Millions of people sick and hundreds of thousands dead.

A contested presidential election where the sitting president refuses to accept the results of the election.

As a human being, it would be impossible to ignore these headlines or allow your emotions to be brought into the equation.

As an investor, you have to do your best to separate those human emotions from your decision-making process.

History can be a crude guide. Giant tech stocks outperformed before, during and after the bear market and are only now slowing down a bit.

Value stocks got crushed even worse than growth stocks during the crash.

The stock market is not supposed to bottom on a 9% up day like we saw on March 24th.

A lot of stuff happened this year in the markets that wasn’t supposed to happen based on history.

History can only get you so far when investing.

The outcomes will always seem obvious in hindsight. The government threw trillions of dollars at this thing. They literally gave people money.

It seems obvious now that those trillions and an implicit backing from the Fed would provide a floor under the markets. But few people at the time were predicting a rush back to all-time highs while these programs were being rolled out.

At the time, skeptics were saying things like, “The Fed can’t stop a virus.”

And that remains true but they can stop a depression in its tracks.

It feels obvious now that markets would react this way but it wasn’t a foregone conclusion at the time things would turn out so rosy for the stock market.

Markets are getting faster. In a four week period from late-February through late-March the stock market experienced the fastest bear market of 30% or worse from all-time highs.

Those highs were back again just 5 short months later.

Companies that are losing money are seeing their market caps grow by billions of dollars a day as investors look to the future of what they could become. Some of these companies may yet grow into those expectations while others will sadly disappoint shareholders.

It doesn’t matter to investors right now because everything is on hyperdrive. I expect that to continue in a world where technology is making everything faster.

Buy and hold is still pretty hard to beat. Paraphrasing Churchill — buy and hold is the worst form of investing, except for all the others.

Buy and hold in the U.S. stock market would have meant sitting through an excruciating 30%+ peak-to-trough drawdown in a month. It also meant experiencing a 60%+ recovery ever since.

The sum total of these two polar-opposite market moves is a year-to-date gain of more than 15%.

Could things have gone much worse for those who held their stocks and didn’t panic? Most certainly.

Things have and most certainly will be worse than a 4-week bear market that made investors whole a handful of months later.

But the lovely thing about a buy and hold strategy is the fact that it is so simple and still very hard to beat.

Bonds can fall too. 2020 had some extenuating circumstances but the drawdowns in certain fixed income segments of the bond market are still pretty wild: 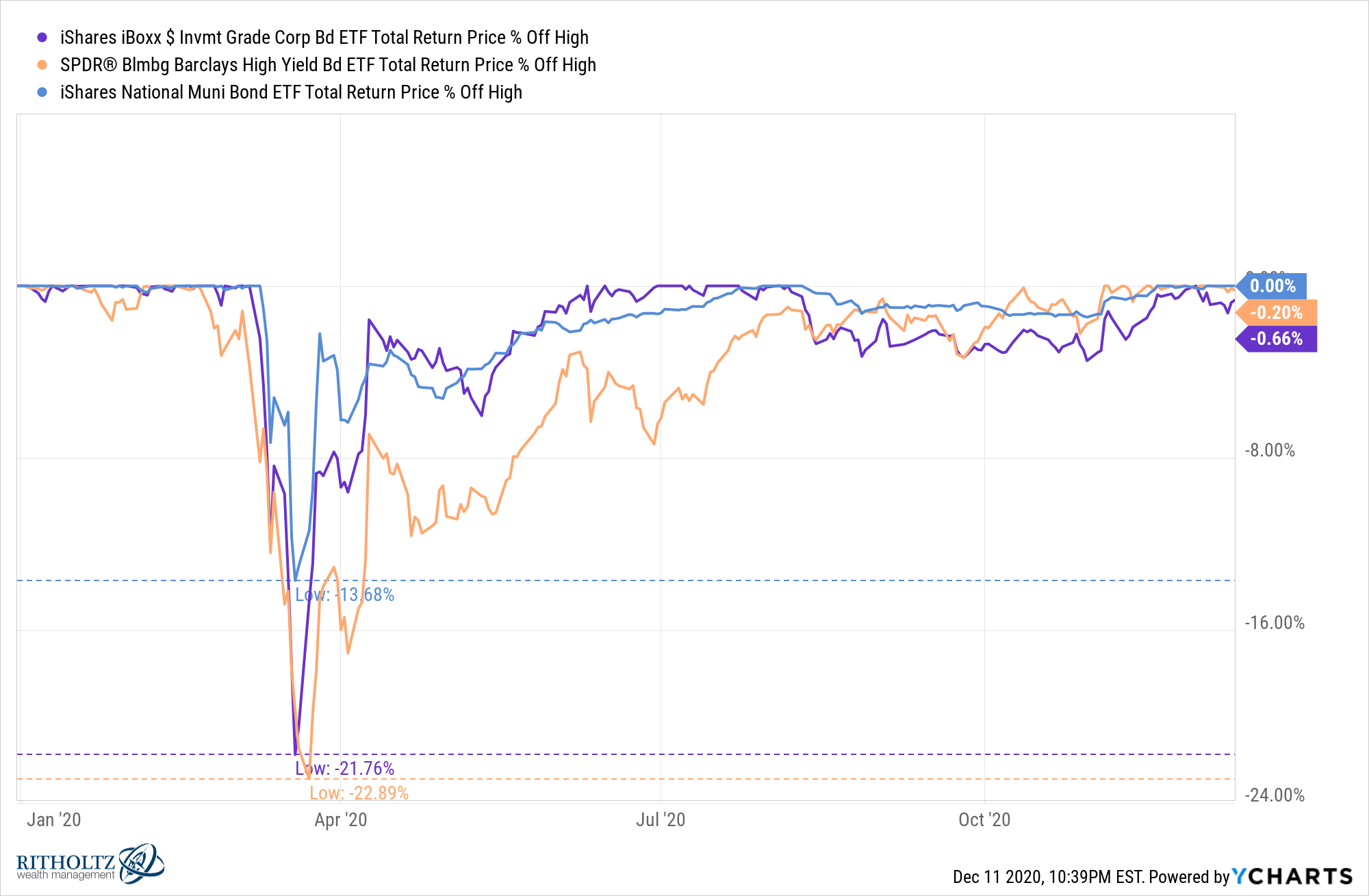 Corporate and high yield bonds were both down 20%+ like that.

They have, of course, snapped back thanks in large part to Jerome Powell but the fact that certain bond funds can fall this far this fast definitely came as a surprise to many fixed income investors.

Buying during a bear market is hard. I’ve had numerous conversations with investors who went to cash in February or March and remain in the fetal position.

Again, it feels obvious now but it was touch-and-go for the markets there for a few weeks.

Holding is difficult but it may be even harder to go one step further and buy when stocks are falling and everyone is running for the exits.

Buy and hold only works if you both buy and hold when it feels like the market may never rise again.

If you’re not following some sort of rules-based approach when stocks are falling it almost becomes impossible to buy during a crash because it will always feel like you’re going to buy too early.

The stock market has the ability to make you feel like an idiot and a genius in the same year. Holding onto your stocks in mid-March when the entire world felt like it was in a freefall felt like the height of insanity as an investor.

Remember when people were debating whether we should close the stock market because it was getting annihilated day after day?

Now it’s the total opposite. Everyone holding stocks feels like a genius. Everything you buy goes up seemingly every day.

Neither of those extreme feelings is ever completely valid.

Unfortunately, sometimes it takes a nasty bear to remind investors of this fact.