I’m trying to cover the bear market from every angle because the psychology of these market environments fascinates me to no end for a few reasons:

I’ve looked at the returns from the bottom of a bear market and the fact that the gains coming out of the bottom tend to be strong but a comment on Twitter this week caused me to look at this from a different angle.

What do the returns look like in the 3 months before stocks bottom in a bear market? 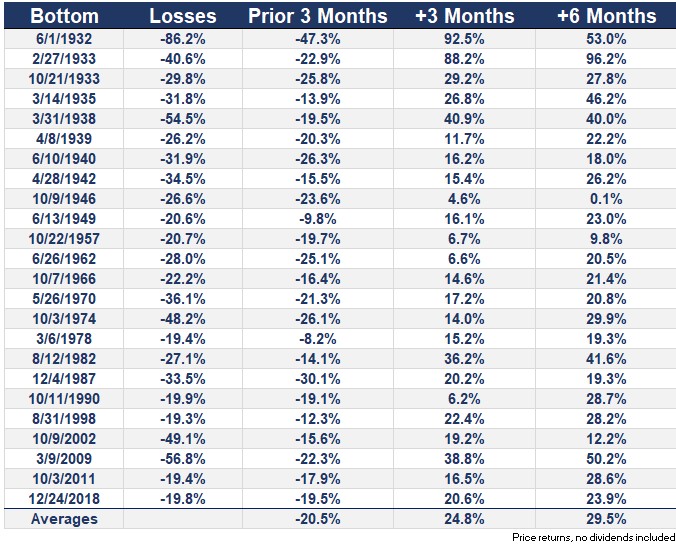 Michael and I discussed on a recent Animal Spirits:

The stock market is the ultimate place for regret because there is always reason to second-guess your decisions.

But this only really matters for people who concern themselves with the short-term. Over the long-term a few months here or there won’t make a difference in your portfolio. Regret should only truly exist in portfolio decisions that are made outside of a well thought out plan.

Would it be nice to nail the bottom with every purchase during a down market?

Is it reasonable to assume you’re going to nail the bottom of a bear market?

Do people over-think these things to their own detriment?

Are you better off just buying shares on a set schedule automatically rather than trying to time things?

For some reason it becomes easier to slip into an outcome-based mindset during a bear market. Markets move so fast that you immediately feel like you’ve been vindicated or invalidated with every buy/sell decision you make.

This is a slippery slope.

It’s more important than ever during a bear market to remember your time horizon as investors are tempted into thinking like short-term traders with long-term capital.

I’ve given up worrying about being too early or too late with my retirement contributions because I know in 20-30 years I’ll never remember the exact price points or entry levels when I buy into a down market.

But I do know that I would regret it if I tried to get too cute with my decisions and completely abandoned my plan simply because emotions are heightened at the moment.

Further Reading:
What If You Buy Stocks Too Early During a Market Crash?