In the fall of 2008 I had a colleague who confided in me that he was changing his 401k contributions from stocks to a money market fund. He urged me to do the same as the entire financial system was seemingly crumbling around us.

I was in my mid-to-late 20s at the time and didn’t think this made sense at all. I was just beginning to ramp up my savings to the point where it was finally making a difference. The only problem is every time I put money to work it would go down.

My savings could barely keep up with the daily, weekly and monthly declines.

But it didn’t matter because I was losing a big percentage of a relatively small pool of money. And the market was crashing so much that I figured I would never see prices that low again in my lifetime. As they kept falling I kept buying.

What was the point of going to cash if I couldn’t touch the money for 3-4 decades?

I’m not trying to pat myself on the back here. I was probably more naive than savvy at that point in my investing lifecycle. But sometimes trying to be too savvy when it comes to the market can be your downfall.

Last week I received my first question about suspending retirement contributions until the dust settles on this thing.

And this wasn’t from people who were in need of the money because they were worried about their job or family finances. This was a market call. Why continue to put money in if stocks are crashing?

The reason is quite simple — the retirement contributions you make into the stock market during a market crash will invariably be the best purchases you ever make, especially when you are still relatively young.

Dataviz extraordinaire Nick Maggiulli ran some numbers for me to determine what the ending balance of each individual $100 monthly contribution into the S&P 500 would look like starting in 2007: 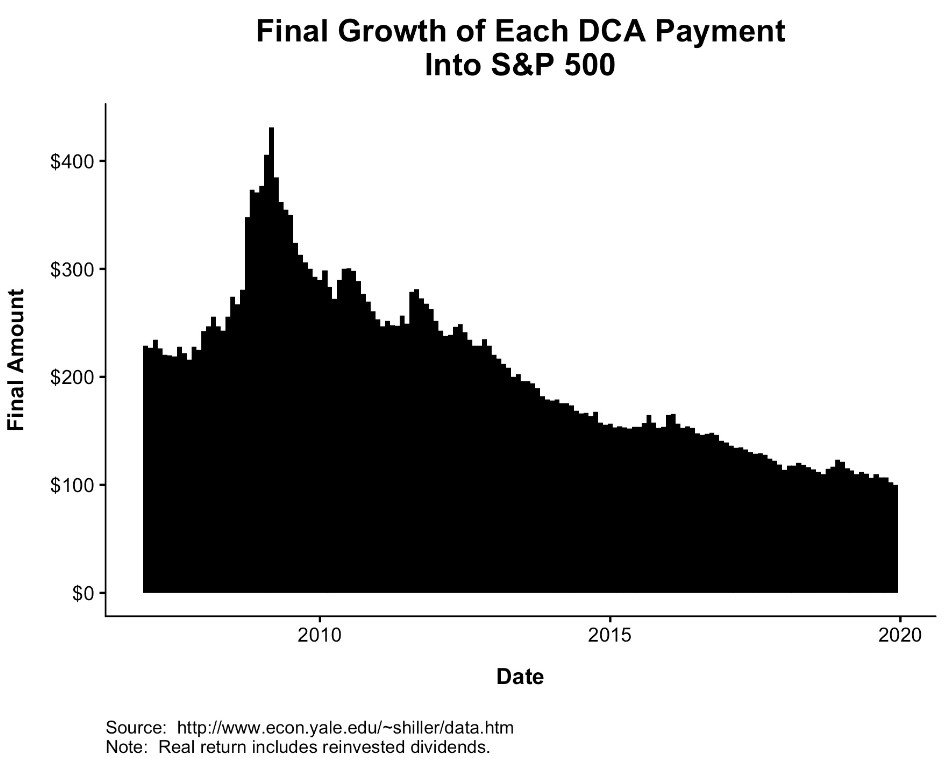 It’s obvious that your future returns would be greatest from the bottom of a nasty bear market but look at how much higher the ending dollar amounts are on all of those contributions that cluster around the financial crisis.1

Even the contributions that were way too early or way too late in relation to the bottom look amazing in terms of their growth. Those contributions have had longer to run than the more recent purchases but that’s the whole point.

Even those who are fast approaching retirement could still see current contributions grow for the next two to three decades depending on their lifespan.

Plus there’s the fact that “waiting until the dust settles” is a strategy that has never worked in the history of the markets.

The beauty of dollar cost averaging is you don’t need to nail the bottom in order to succeed. Simply continuing to invest while stocks are far below where they were five weeks ago is much easier than trying to bottom tick the market.

Some people will be forced to cut back on retirement savings during this difficult time. There’s nothing wrong with that if you have no other options. Family finances are more important than the stock market at a time like this.

But for those who have the ability to continue making retirement contributions, there’s no need to wait for the dust to settle. Buying periodically when stocks are down is a good thing.

In fact, anyone who is saving should hope the market goes lower or stays where it is for a while to continue buying while stocks are on sale.

Further Reading:
Buying During a Crisis

1This data only goes through the end of 2019 so these dollar amounts would be smaller now after the crash. But the important thing here isn’t the absolute dollar amounts or returns, but the relative gains seen during a panic.