It seems that every investor these days considers themselves to be a contrarian, so much so that the term doesn’t carry as much weight as it once used to. I almost hate to even define myself as a contrarian anymore. I don’t think being a contrarian is as much about going against the crowd as it is about thinking for yourself and coming to your own informed conclusions about the world.

When working with pensions, endowments, foundations or other large institutional-level funds it’s easy to become overwhelmed by the sheer size of the funds these organizations are dealing with. The problem that I’ve found over the years is that people are way too quick to assume that fund size automatically equates to sophistication or brilliance in portfolio management.

And don’t get me wrong — there are some large institutional funds out there who can blow you away with the sophistication of their investment programs. But my biggest problem with this space has always been the fact that so many of these funds assume that because they have so much money to manage that they are assured a seat at the table with the best of the best investors.

It took me a while to come to this realization, but institutional investors are really just dealing with a couple more zeros than the rest of us. They have more money, but that doesn’t stop them from making the same exact mistakes as everyone else. In fact, in my experience it seems that this group is even more prone to behavioral biases than other investors because they are so overconfident in their abilities because of their size.

The thing that most people don’t realize about the “smart money” is the fact that very few of the people pulling the strings have much experience in portfolio management. There was a recent study of pension plans with an average fund size of nearly $50 billion. This group had almost 850 trustees overseeing these plans, but just 23% in this sample had any experience in asset management.

That doesn’t mean these people can’t make good decisions on behalf of their beneficiaries, but I’ve been surprised to see how accepting these trustees can be of a good sales pitch with little substance or evidence to back it up. It’s obviously not everyone, but I’ve always felt that the institutional investment community was far less evidence-based than most people outside of this world would assume.

Stories, narratives and a good sales pitch still seem to carry more weight than anything else. Things like performance chasing, herding, fighting the last war, extreme overconfidence, unrealistic expectations and a general lack of an overarching investment philosophy are commonplace among many large pools of capital.

It’s hard to shed tears for organizations who have millions or billions or dollars at their disposal but so many of them are nonprofits with missions in place that are focused on really important issues and helping others. Much of this money is earmarked for great causes so it’s a shame when it gets mismanaged.

It’s not so much that institutional investors are irrational. Some are, but many firms and organizations simply focus on the wrong things because of ego, career risk or a general lack of understanding about the importance of investment policy. Investment policy isn’t very popular because it’s not as sexy as finding the best money managers or forecasting the nest quarter or two of market or economic performance. Everyone knows policy is important but very few organizations spend their time focusing on it.

I wrote about some of these issues a few months ago in relation to the institutional consulting industry and offered some potential areas of focus that would be more helpful to nonprofit investors (see Death by a Thousand Cuts).

The good folks at IMN saw this post and reached out to myself and my colleague Josh Brown about the possibility of creating a conference based on some of these ideas in partnership with Ritholtz Wealth Management. Long story short, the stars have aligned for us to put together the first ever IMN-RWM Evidence-Based Investing Conference in NYC this fall.

‘Evidence-based’ is a phrase that probably gets thrown around too loosely in the investment world, so this is something we’re all very excited about in terms of how to approach this subject. We don’t pretend to have the market cornered on exactly what evidence-based means, but we’ve tried to assemble a group of experts and investors who can shed some light on what it should mean. The list of speakers is loaded and still growing: 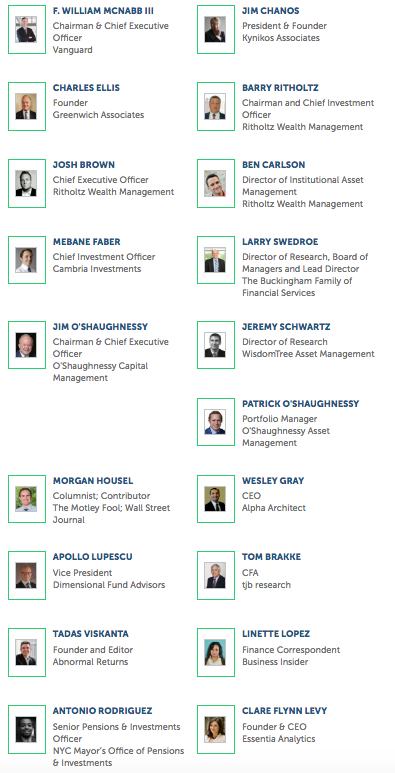 Not only are there going to be great speakers at this conference, but the list of attendees is also shaping up to be filled with high quality individuals. I’m so excited about the possibilities for this event. It’s going to be a lot of fun, but more than anything I think it will be helpful for the institutional investment community, as well.