Investors often evoke the old saying that history doesn’t repeat but it does rhyme. The problem is even when market scenarios do rhyme the differences far outweigh the similarities because every time is so different in the markets. Bridgewater Capital’s Ray Dalio has evoked the 1937 analogy for a few years now to describe the current market environment. While I have enormous respect for Dalio I wrote this piece for Bloomberg to discuss where this comparison goes wrong.

When Donald Trump was elected president, Ray Dalio, the founder of the hedge fund Bridgewater Associates, was optimistic about the new administration’s economic agenda. Since then, his notes have turned increasingly pessimistic. He recently said his firm is reducing risk over worries that the U.S. is becoming politically more divided. Dalio recently compared today’s environment to the situation in the late 1930s:

It seems to me that we are now economically and socially divided and burdened in ways that are broadly analogous to 1937. During such times conflicts (both internal and external) increase, populism emerges, democracies are threatened, and wars can occur. I can’t say how bad this time around will get. I’m watching how conflict is being handled as a guide, and I’m not encouraged.

Dalio has made the 1937 analogy before. Yet it’s impossible to quantitatively compare two different eras in these terms. We can, however, make an economic and stock-market comparison to those times to get a better sense of how things played out in the first recession following the Great Depression. There are a few similarities between that period and today. Interest rates were low for a long time in the 1930s. The 10-year Treasury yield began 1937 at 2.7 percent. It currently stands at around 2.2 percent. In both cases, the Federal Reserve was tightening monetary policy, as well. And both periods saw a huge stock market rally following a previous crash and deep recession.

But that’s really where the similarities end. Everything that happened in the 1930s was magnified compared with what we’re experiencing today. After falling in excess of 80 percent during the Great Depression, stocks finally found a bottom in the summer of 1932. The rebound was so pronounced that equities were up more than 90 percent in the months of July and August of 1932 alone. From the bottom in 1932 through early 1937, stocks had an enormous rally, gaining about 415 percent in less than five years. This was good enough for an annual gain of more than 40 percent a year.

Unfortunately, the good times didn’t last. After peaking in February 1937, stocks fell 50 percent over the next year, culminating in a 25 percent loss in March of 1938. It’s no wonder that no one wanted anything to do with stocks for many decades following this period. After witnessing the greatest stock market crash in history from 1929-1932, investors watched stocks get chopped in half a few years later. 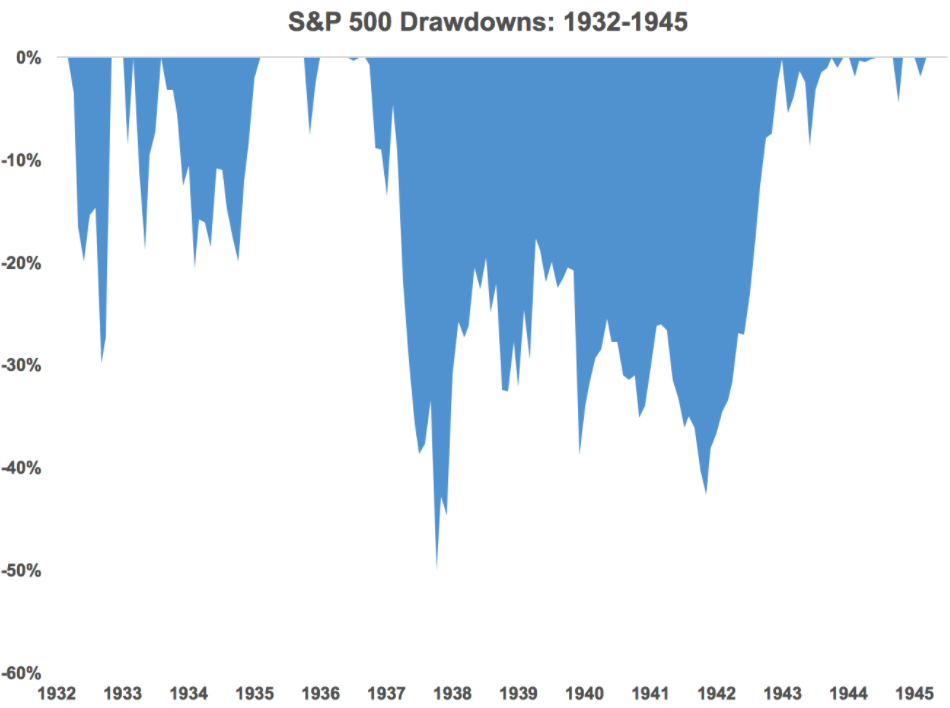 Economically, things were much different, too. The unemployment rate hit 25 percent by the end of the Great Depression and was still hovering around 14 percent going into the 1937 recession. By the end of the recession in 1938, the unemployment rate was back up to 19 percent. During the Great Depression, gross domestic product contracted almost 27 percent. In the 1937-1938 contraction, GDP fell more than 18 percent.

The financial crisis from 2007-2009 was a nasty recession to be sure, but GDP only shrank by a little more than 5 percent in that time. The unemployment rate hit double digits but now stands at 4.5 percent or so. Since the bottom in March of 2009, the S&P 500 is up more than 300 percent or about 18 percent per year. There was double-digit GDP growth in the mid-1930s, but the current recovery has been muted, with slow but steady single-digit growth.

In 1937, President Franklin D. Roosevelt had to raise taxes to pay bonuses for veterans of World War I and the government swiftly cut spending in other areas to reduce the federal deficit. Many believe these moves exacerbated the 1937-1938 recession. Such mistakes could happen again.

Benjamin Roth, a lawyer who kept a diary throughout the Great Depression and its aftermath, wrote this following in the midst of the 1937 economic and stock market collapse:

The more I see of the recent stock market slump the more I am impressed with the fact that the American people look upon the stock market as a place to gamble and not to invest. In times of rising market the average American becomes over-optimistic: He invests his whole capital in common stocks of the most speculative variety; often extends himself on margin. Then when a slump comes he finds himself over-extended; no cash reserve to fall back upon; he becomes unduly pessimistic and sells at a loss. What the American needs is not only stock exchange regulations but also an education on the investment possibilities of the stock market.

Although the current time frame doesn’t match up perfectly with what was going on in the 1930s, it does make sense for investors to heed Roth’s advice — an education in the possibilities of the stock market is a good way to prepare for a wide range of scenarios.