When my wife got pregnant for the second time she said something felt off.

It was just a different feeling than the first time. On the way to her first ultrasound, she had an uneasy feeling.

I said no way that’s possible. We had infertility problems for years. Having one child felt like a miracle. There’s no way it could be two, right?

As the ultrasound tech was moving that microphone-looking thing around her stomach she told us there were babies, plural. My wife was right.

Then the doc started squinting at the ultrasound screen.

“I think I see a third embryo. It might be triplets.”

You could hear a pin drop in the room until I broke the uncomfortable silence with a poorly timed joke about coming up with 3 baby names (this is how I deal with stress).

They spent a lot of time moving things around to make sure it was actually three little humans in there. After a lot of back and forth and some consultations with other doctors, they came to the conclusion it was too early to tell.

“We think there are two fully formed embryos for sure but the third one is hard to say. It could be triplets but we need another week’s worth of growth to say definitively. Come back for another ultrasound next week and we’ll know for sure.”

We left in a state of shock.

We could make it work. What other choice did we have? But it was scary. Our life would be turned upside down forever.

That week was the longest of our lives.

We finally reached the day of the second ultrasound and the third embryo didn’t quite make it. We were having twins.

If you would have told me 10 days before that we were going to have twins I would have been overwhelmed. On an absolute basis, having twins could have been a huge shock to the system. But on a relative basis, going from the thought of having triplets to “just” having twins was a relief.

That week’s worth of stress was a blessing in disguise.

Life is like that sometimes. Expectations matter more than absolutes.

If I have high expectations going into a movie and it turns out to be average, I’m always disappointed (The Irishman). If I have low expectations and the movie is halfway decent, I’m pleasantly surprised (The Gray Man).

The same is true of the stock market. At least in the short-to-intermediate term it’s not necessarily good or bad that matters as much as better or worse. It’s not going up or going down but faster or slower.

There are a lot of people who are confused about the stock market right now.

When inflation hit 8.5% back in June everyone freaked out. 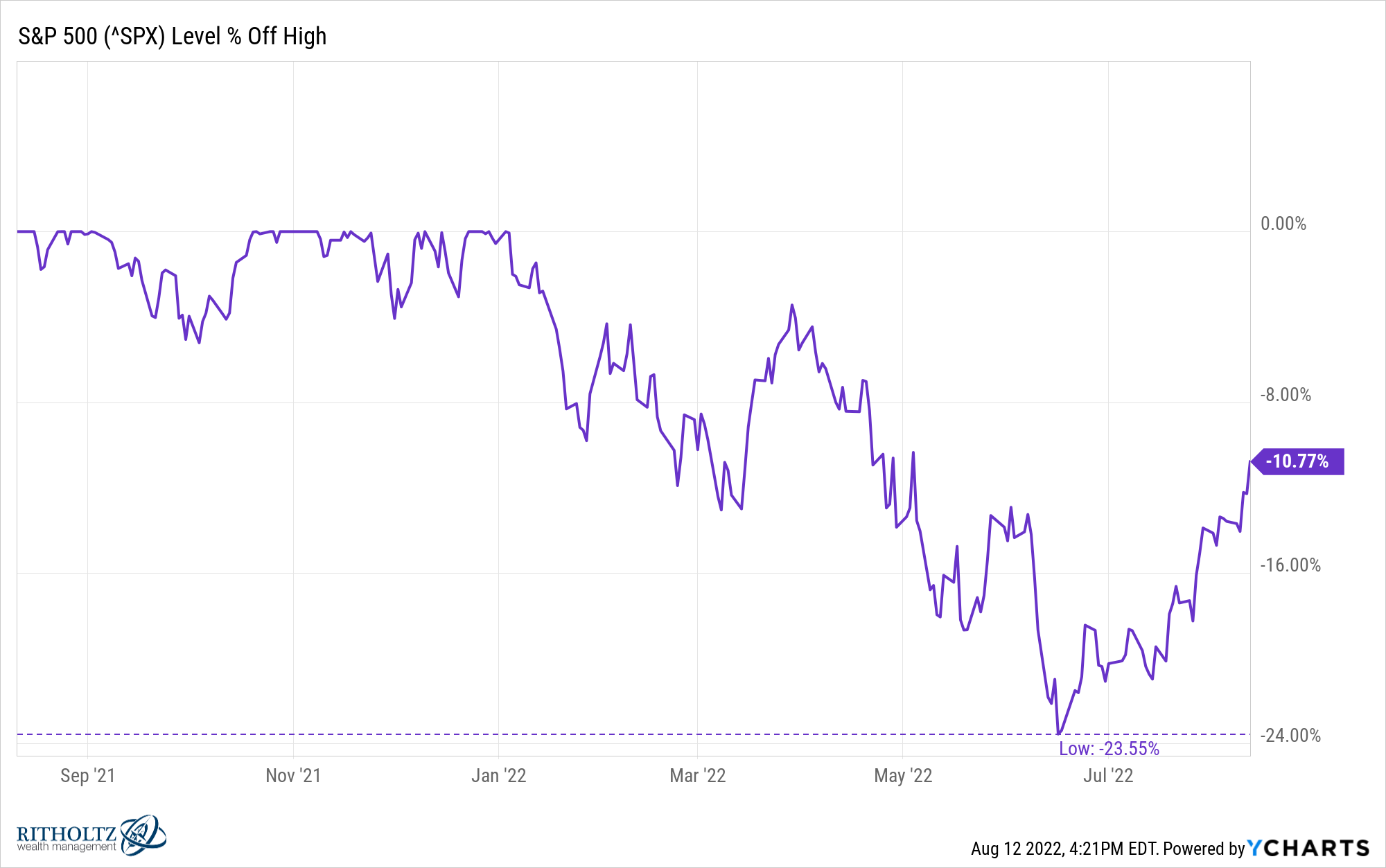 The yield curve is still inverted!

The Fed is still raising rates!

All of these things are still true. We’re not out of the woods just yet. The pace of improvement needs to continue for stocks to hold up.

But it appears investor expectations had simply gotten too pessimistic by mid-June. All it took was some bad news that wasn’t as bad as expected for things to turn around.

Yes, inflation is still high but it came in lower than expected.

Yes, the yield curve is inverted but interest rates have actually fallen somewhat in the past two months or so.

Yes, the Fed is still raising rates but it’s possible they will slow those rate hikes if inflation continues to fall.

Sometimes all the market needs to see is that things aren’t as bad as investors originally feared.

John Templeton once said, “Bull markets are born on pessimism, grow on skepticism, mature on optimism and die on euphoria.”

It’s too early to say if we’re in another bull market at this point. There are still a lot of risks out there that could trip up the markets.

But it’s fair to say investors got far too pessimistic earlier this summer.

That doesn’t mean the current situation is good per se but it is better than it was two months ago.

Michael and I discussed the confusing state of the stock market and much more on this week’s Animal Spirits video: