We were still a week or so away from a wave of shutdowns, quarantines, school closings and business stoppages.

The following Monday (March 9th) the S&P fell 7.6%. That set off one of the most volatile stretches in stock market history. These were the daily returns that followed:

In the span of a month there were 8 days with losses of 3% or worse, including 4 daily drops of 5% or worse. There were also 7 daily gains of 3% or more, including 5 daily gains in excess of 6%. Out of 21 trading sessions, there was only one that wasn’t a gain or loss of 1% or more.

I never thought it would be possible to top what took place in 2008 but March 2020 did that for me.

In honor of the one year anniversary of the stock market bottoming, I went back through some of my tweets and blog posts from last March as a reminder about how crazy things were that month.

When the U.S. stock market fell nearly 8% in a single day the crash was on. The problem is the market plays head games with you when trying to perfectly time a crash.

Here’s what I wrote about big down days at the time:

Days like this are why IQ can only take you so far in the markets. It doesn’t matter how smart you are if you don’t have the right temperament to keep your wits about you when things go haywire.

I bought stocks today and not because I’m trying to buy the dip or catch the bottom. I bought stocks today because I buy them every single month at this time and will continue to do so. Buying as stocks are falling rarely feels right but this is what we are supposed to do as investors. I have a few decades ahead of me and will be a net saver for years to come.

One of the strangest market subplots of the pandemic is the fact that everyone knew on the exact same day when the country officially went into a recession. That has never happened before.

On March 12th, the day after the NBA shut down and Tom Hanks tested positive, I wrote about creating an overreaction plan to prepare for this recession.

The market wasn’t quite done overreacting yet either.

It took just 20 trading sessions for the S&P 500 to go into a bear market.

It didn’t feel like it at the time, but mid-March was the beginning of the end for the stock market crash. That’s when the Federal Reserve stepped in with bazookas blazing.

At the time many people commented that the Fed can’t stop a pandemic. This is true of course but they can shore up the financial system during a pandemic.

After a 9.5% loss on March 12th was followed by a 9.3% gain on March 13th, a Friday no-less, the market fell 12% the following Monday for one of the biggest one-day losses in history. 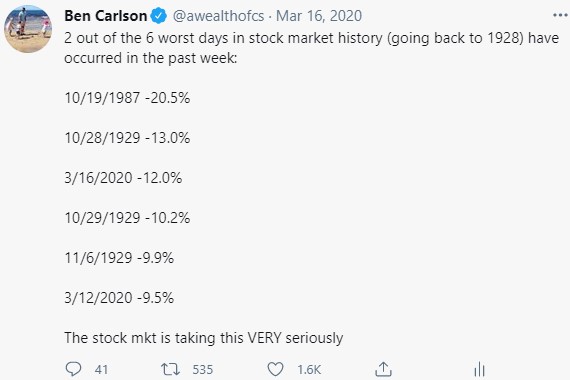 The chart of the S&P 500 looked like something out of a movie after this happened: 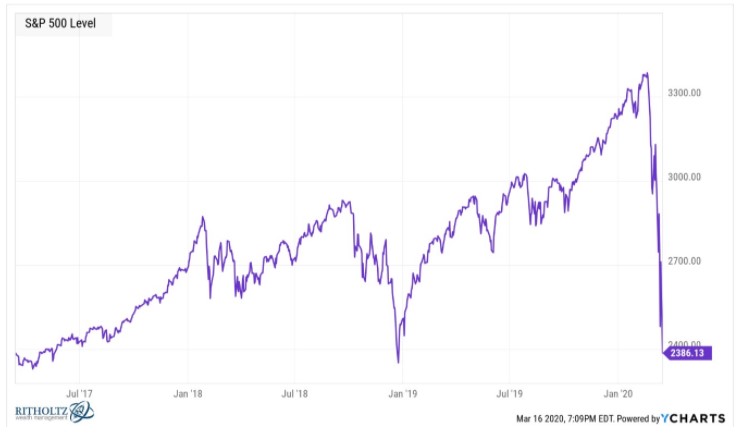 Here’s what I wrote after that bone-crushing 12% down day:

If you would have shown someone this chart before the year began and told them this would happen they would assume aliens landed on earth and declared war.

The repricing of the market that’s occurred over the past month is breathtaking.

This is a loss of 29.5% in just 18 trading sessions! The S&P was at new all-time highs on February 19. That was less than a month ago although it feels like 17 years at this point.

And if the stock market is really just a market of stocks, there were certain companies that got destroyed even worse than the market as a whole.

If you want to know why many of those same stocks have such huge gains over the past year, this is why. They got annihilated last March.

By March 18th, the stock market was slowly working it’s way up the list of worst sell-offs in history. 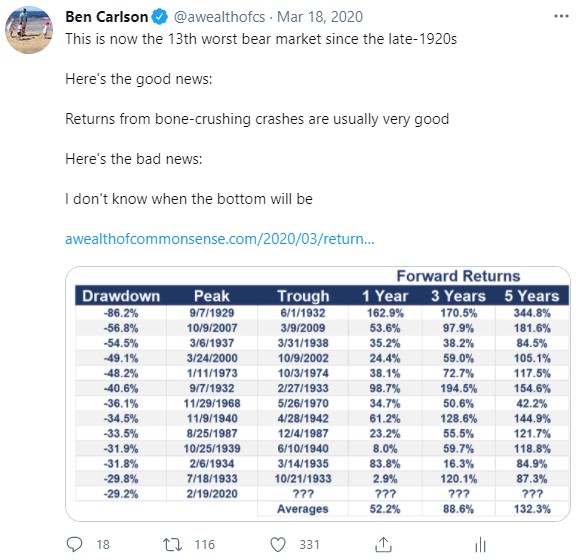 Returns from the bottom of a bear market have generally been fantastic. The problem at the time was figuring out when that bottom would hit.

At the time many assumed the market would surely fall 50-60% from the highs. Many investors were worried about buying too early. 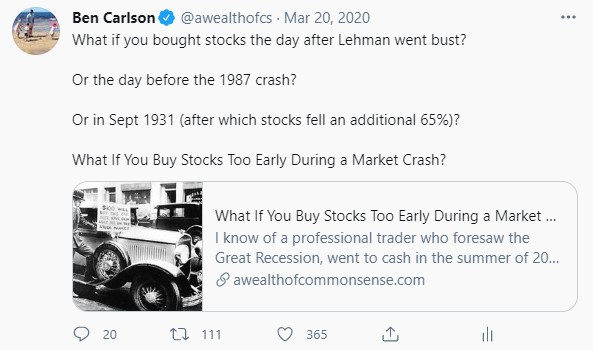 I can assure you no one regrets buying too early in a bear market after the fact but plenty of people do at the time if markets continue to fall.

By March 20th, we were closing in on the fastest bear market of 30% or worse from all-time highs in history. 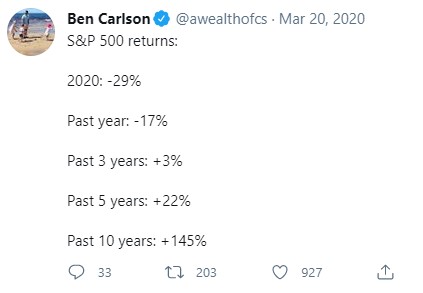 There have only been 12 crashes of 30% or worse since the late-1920s. This one was the fastest to occur from all-time highs.

Following the one-day 12% decline stocks bounced 6% the next day, only to fall an additional 11.5% over the next 4 trading sessions.

Then on March 23rd, stock furiously rallied more than 9%. These types of gains are just as rare as the huge losses but they also tend to cluster around the nastiest bear markets. 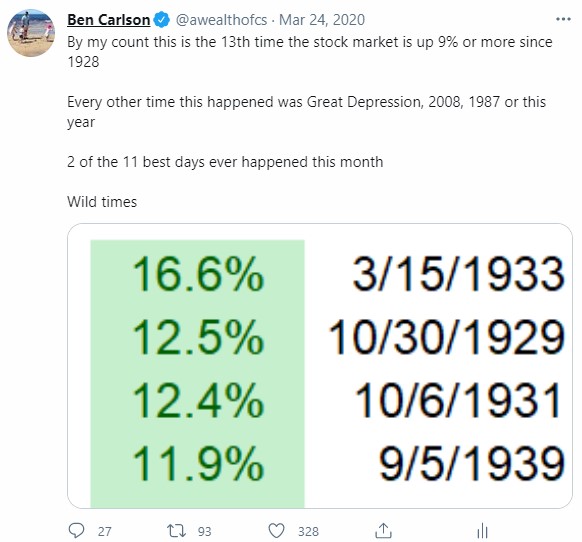 Little did we know at the time that was THE bottom.

Many people assumed this was simply a bear market rally. I even wrote about a history of dead cat bounces to show that’s usually how these things play out in brutal bear markets. 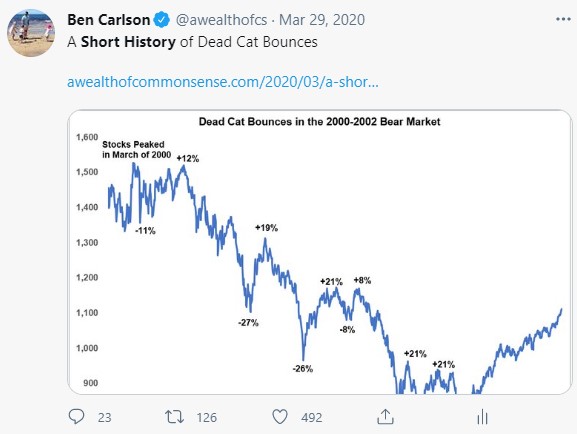 The market would have another 4.4% down day on April 1st but hasn’t really looked back ever since. The gains from the bottom are astronomical for a one year period in the stock market: 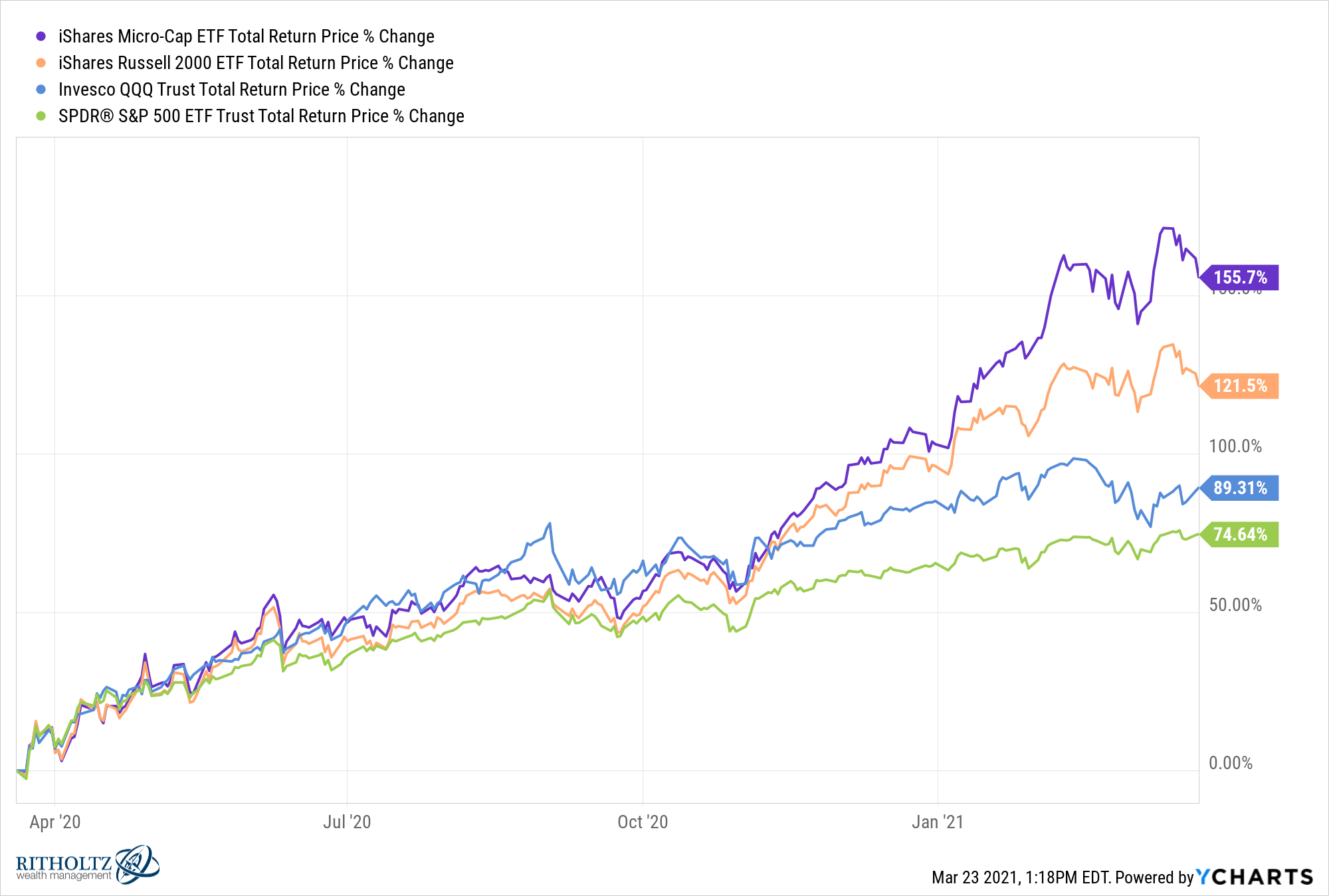 This was a generational buying opportunity.

It’s hard to believe the crash was only a year ago. It feels like another lifetime ago.

As the pandemic took hold of our lives last March I was glued to my phone and computer like the rest of you. The only reading I was doing other than market commentary and Twitter came from history books.

Two days after the market bottomed I wrote about some of the history I had been reading about in How Did We Ever Get to the Roaring Twenties? 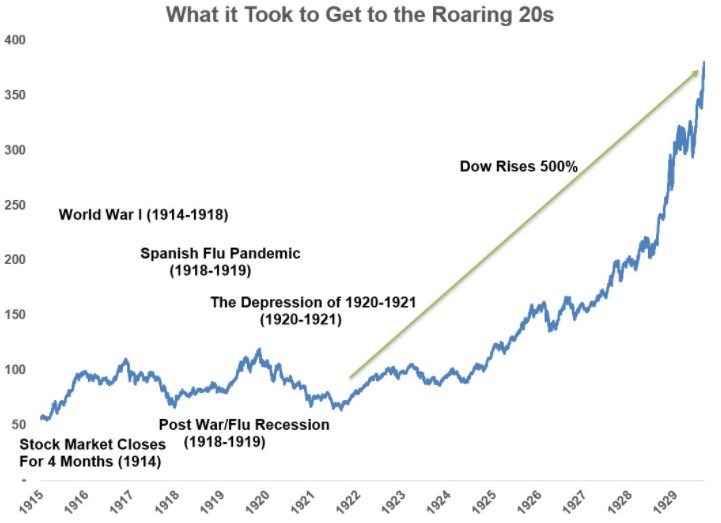 This is what I wrote in that piece:

A year later, I’m hopeful we’re on track for our own Roaring 20s.

After what we’ve all been through, I would even be stratified with the Boring 20s.