Two out of the 6 have come within the past week. The country as a whole may not be taking the coronavirus seriously yet but the stock market absolutely is. 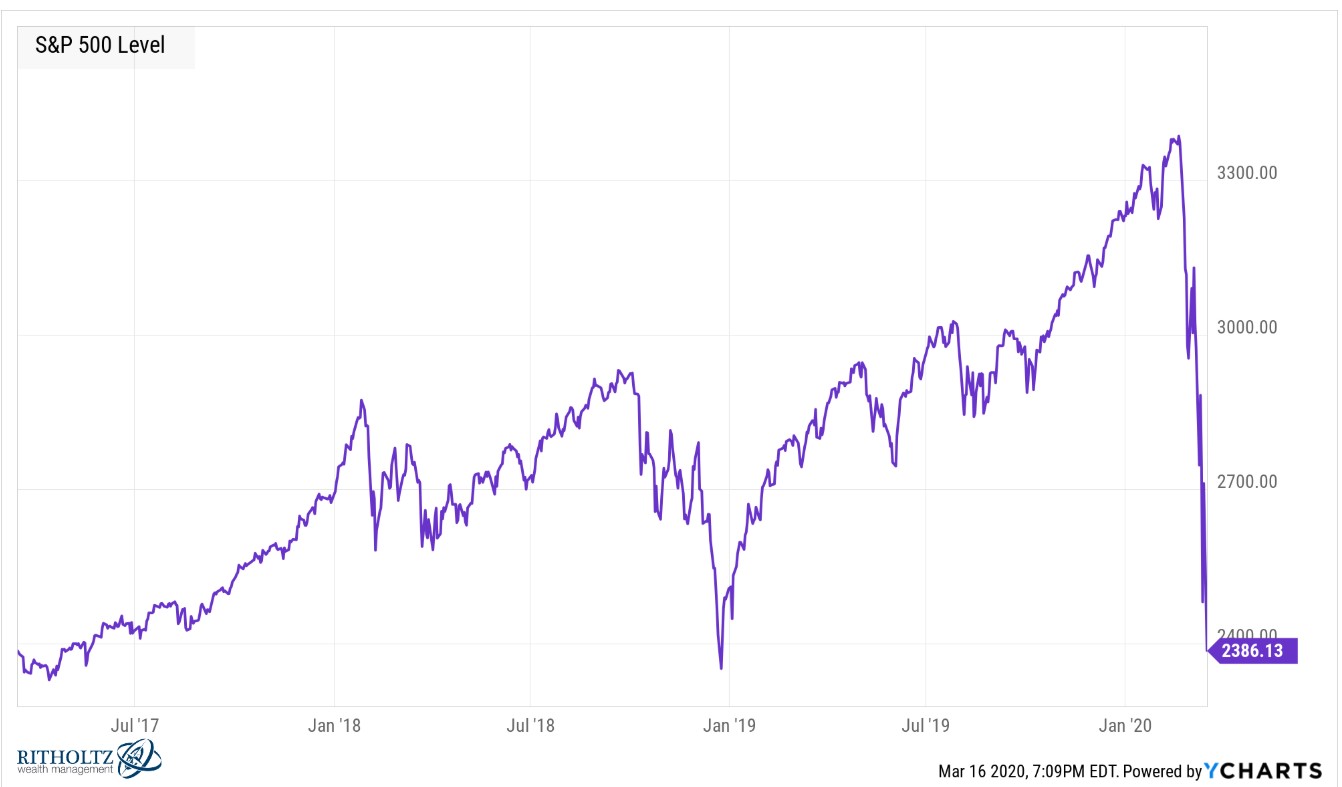 If you would have shown someone this chart before the year began and told them this would happen they would assume aliens landed on earth and declared war.

The repricing of the market that’s occurred over the past month is breathtaking.

This is a loss of 29.5% in just 18 trading sessions! The S&P was at new all-time highs on February 19. That was less than a month ago although it feels like 17 years at this point.

The good news for anyone who was kicking themselves for not buying during the late-2018 swoon that bottomed on Chrismas Eve is we’re only a little over 1% away from being back to those levels.

To put the speed of this plunge into perspective, the fastest peak-to-trough bear market that saw losses in the area of 30% or worse occurred in 1933. That one took a little more than 3 months to get to a loss of 29.8% while this one is a similar drawdown in one-third of the time.

1987 is the only other historical comparison that comes close. Stocks technically peaked in August and bottomed in December that year but the S&P 500 was down more than 30% in a week’s time following the Black Monday crash.

The strange part about the 1987 crash is that it didn’t front-run a recession. In fact, the economy was just fine following this crash, even though economists at the time were predicting another Great Depression.

We won’t be so lucky this time. For all intents and purposes, we likely went into a recession this week.

Schools, businesses, travel and life as we knew it just a few short days ago have all but shut down at this point to arrest the spread of the virus.

Nearly every business on the planet will be impacted in some form or another while many will be decimated. I hope the government steps up to the plate to provide a backstop but at this point, the slowdown will occur regardless of the potential fiscal stimulus.

The question for the stock market is and will remain — how much of a slowdown is being priced in here?

The economic data that will come out in the coming months will look even sillier than a chart of the S&P 500. The comparables to the previous periods will look like mistakes.

Repricing will continue until we can get a handle on this thing and understand how bad it will be in terms of severity and length. But eventually the stock market will start to look past this.

I don’t know when that will be and anyone trying to guess what the GDP impact will be is doing just that, guessing.

This may be the most telegraphed recession in U.S. history in terms of its timing. The stock market has acted accordingly. In fact, during the 9 bear markets in the S&P 500 since WWII, the S&P 500 has declined by an average of 34%. So we’re right there in terms of the average bear market if there is such a thing.

How much further we have to go will depend on a number of variables.

How bad does the market think this will get?

Or am I giving investors too much credit here?

How much further down can we go if things get worse than expected?

Could the market actually rally in the face of the worst news if things are marginally better than expected?

These are unanswerable questions at the moment but it shows why this period is so confusing from a market perspective. Everything is happening so fast and there are no historical precedents for the current scenario. Even the 1918 flu pandemic had the massive war spending to fall back on from an economic perspective.

Markets don’t trade on absolutes, especially with something like this. They trade based on relatives.

It’s not good or bad that matters so much as better or worse than expected.

Stocks bottomed in March 2009 but the unemployment rate didn’t peak until October of that year.

The stock market knows there’s going to be an enormous economic contraction. Its possible stocks will bottom and rally well before the National Bureau of Economic Research officially makes the call for a recession beginning this year.

Obviously, no one knows the answers to these questions because we still have no idea the type of destruction this virus and shutdown are going to leave in their wake.

The only thing I’m fairly certain about at this point is that volatility will likely be with us for a while — in both directions.