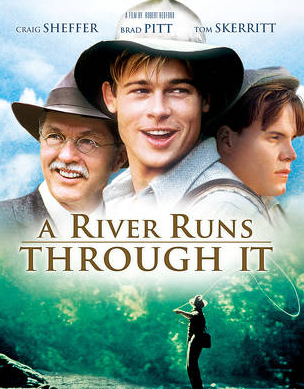 In the opening scene in A River Runs Through It, narrator1 Robert Redford remarks:

Long ago, when I was a young man, my father said to me…

Then he said, “Someday, when you’re ready…you might tell our family story.

Only then will you understand what happened and why.”

This is a wonderful lesson on the art of writing and how sometimes you don’t actually understand a subject until you go through the writing process. I’ve seen numerous forms of the quote, “I write to find out what I think” and that’s been one of the unintended outcomes of writing for me over the years.

The movie A River Runs Through It is based on a semi-autobiographical book by the same title by Norman Maclean (the voice Redford was playing). I recently re-watched and it aged beautifully as a movie about family, writing, fishing, and nature.

I’m not even a fisher myself but the fishing scenes in the movie are wonderful.

Early in the story, young Norman (played by Joseph Gordon-Levitt of Angels in the Outfield and 500 Days of Summer fame) is shown writing and then re-writing a paper and having his minister father (played by Tom Skerritt) look it over for him.

This is how the scene plays out:

Norman is at his desk hard at work writing a paper which he then turns into his father for review. His father marks it up with a red pen and simply says, “Half as long.”

Norman goes back to work, cuts the length of the paper in half and turns it in for further review. His father marks it up once more and says, “Again, half as long.”

Following a final round of edits, his father looks over the finished product and says, “Good, now throw it away.”

This one immediately spoke to me because it provided two valuable writing lessons:

(1) Brevity is important. Looking back on it now it’s ridiculous how many teachers forced me and my fellow classmates to write papers a certain page length when I was in school. The goal should be to make your point using as many or few words as are necessary. I love this quote from the scene: “He taught nothing but reading and writing. And being a Scot…believed that the art of writing lay in thrift.” People are busy, or at the very least claim to be, so get to the point in whatever you’re writing.

(2) The process of writing is more important than the finished product. I like to think his father made Norman throw away his paper at the end of this scene because he was trying to teach him how to write not what to write. The writing itself matters very little when you’re trying to become a better writer. Going through the process of writing matters a lot because that’s how you improve.

This is my second Brad Pitt 1990s movie rec (he plays Norman’s younger brother, Paul) in as many weeks but this one is worthy of a re-watch. I never noticed the writing angle when I watched it in the past.