Excuse the headline here but I couldn’t help myself. Everyone else gets to make outrageous market crash predictions but my actual take is a little softer than most. I know the market will crash a number of times over the course of my remaining investing lifecycle. I just don’t know when.

Here’s a piece I wrote at Fortune to talk through this ever-present risk.

A friend recently asked, “Ben, just between you and me, the market is going to crash, right?”

My answer was a resounding “yes.” The stock market will definitely crash at some point. That’s just the nature of the beast.

The logical follow-up question was this: “So can you tell me when it’s going to crash?”

My answer this time was a resounding “no.” I wish I knew the answer to this question but, unfortunately, no one knows when the market will crash.

According to the United State Geological Survey (USGS), major earthquakes (magnitude 7.0-7.9) occur a little more than once a month. Great earthquakes (magnitude 8.0 and higher) are seen roughly once a year, on average. Earthquake experts can use historical statistics to understand patterns of these natural disasters but they don’t occur on a set schedule. So even with advances in geological technology, it’s still impossible for experts in this area to predict exactly when the next big one will strike.

The same is true of the next stock market crash. But even using historical patterns doesn’t provide much clarity because there’s little rhyme or reason to the market environment when a crash occurs. Here’s a look at a variety of market variables just before every bear market since World War II: 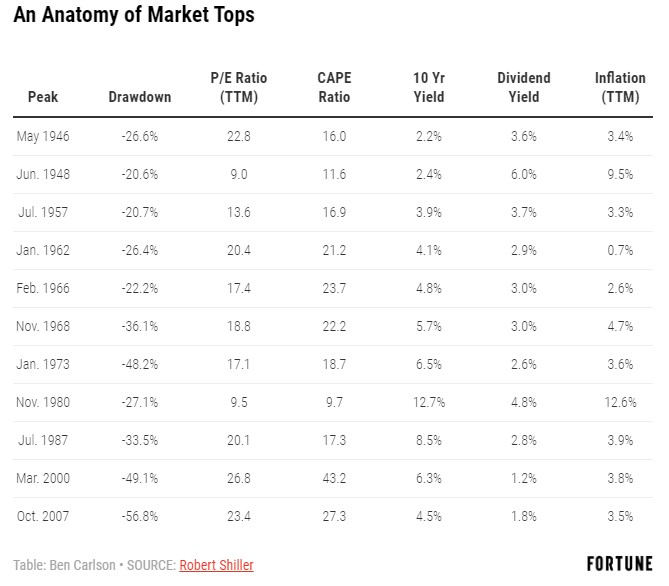 Investors would kill for the low valuation and high yields seen at previous peaks in the late-1940s, mid-1970s or early-1980s. It didn’t matter at the time. Stocks still fell big in each of those situations.

Over the past two decades the S&P 500 has been cut in half twice, leading many investors to believe every bear market will result in a full-fledged crash. That’s always a possibility but there’s nothing written in stone that says every market peak will lead to a complete meltdown.

After the horrendous market crash during the Great Depression which saw the market fall upwards of 85%, stocks crashed 50% just a handful of years later starting in 1937. But then a funny thing happened. There was no earth-shattering crash for close to 40 years after those two debacles. 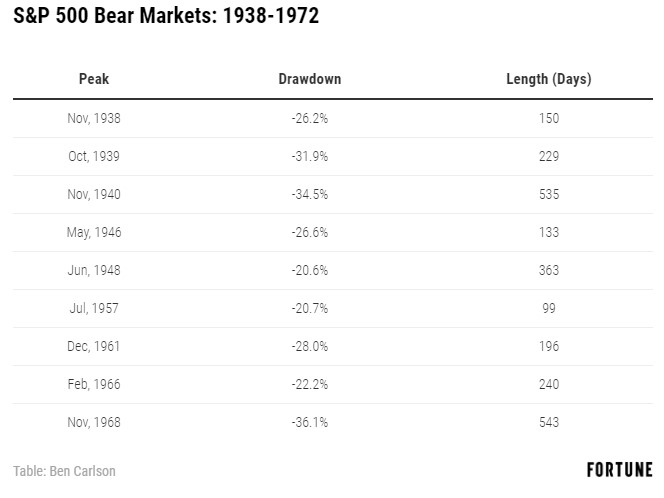 Market crashes are always a possibility but there are also run-of-the-mill bear markets where markets fall but don’t get totally shellacked.

Calculating any number of up-to-the-minute fundamental ratios is easy these days because market data is ubiquitous. However, simply knowing the fundamentals won’t offer an edge in the markets because numbers don’t take into account the human element. We can measure past and current price-to-earnings ratios but not what prices investors will be willing to pay for those earnings in the future.

In the absence of a clear crystal ball, here are a few ways to prepare for the inevitability of market crashes:

Humans are prone to taking things too far in both directions but that doesn’t help predict how far we’ll collectively take things during the next melt-up or meltdown. I know for sure there will another market crash at some point. It’s something all investors should mentally prepare for. The hard part is knowing when that will be.