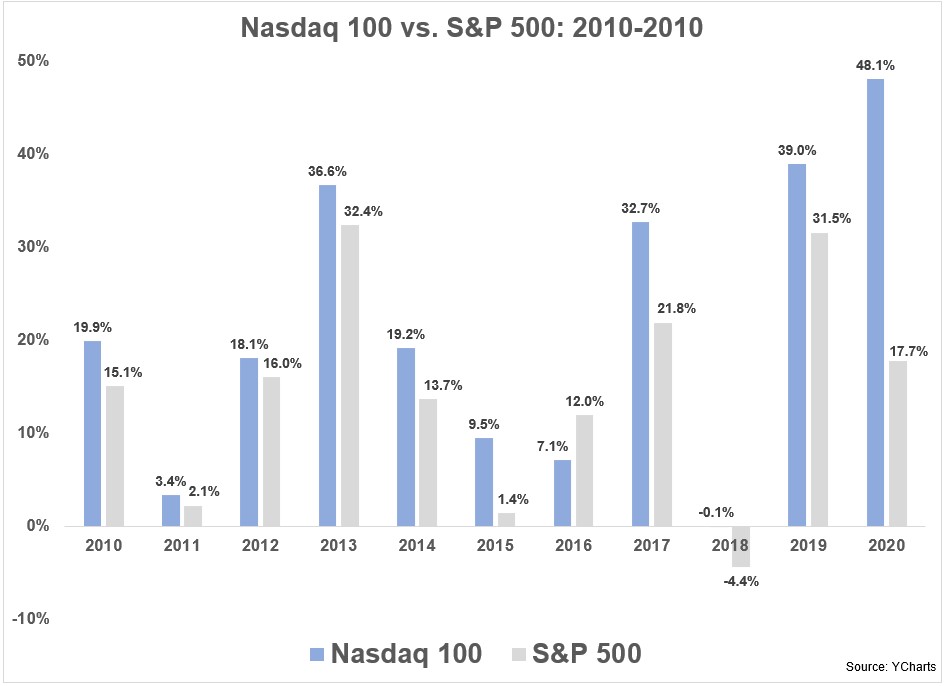 The Nasdaq 100 has outperformed the S&P 10 out of the past 11 years by an average of around 7% annually and 2020 is the widest gap in that time frame. 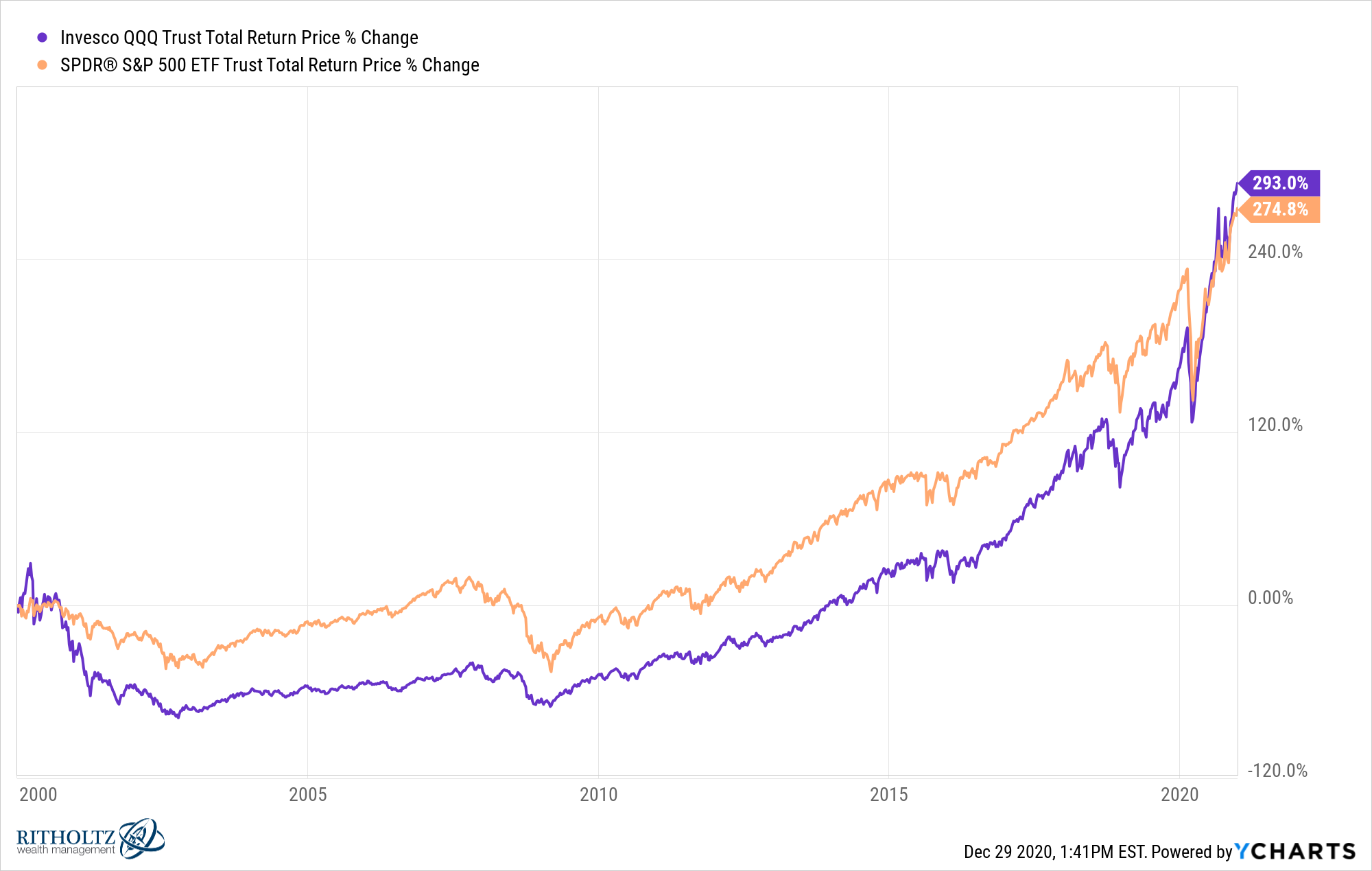 Trying to predict when cycles will begin or end is basically impossible so I’m not even going to try but this is one I’ve been watching for a while now.

2. When will things feel “normal” again? I’m basically used to pandemic life at this point but I can’t wait for normalcy to return.

Things like concerts, the gym, comedy shows, bars, restaurants and travel. There hasn’t been a ton of communication on the vaccine front but I’m guessing you can add at least a month or so to any estimates they give us because we’ve never rolled out a program like this on such short notice.

I’m just hoping by summertime the majority of people are vaccinated and resuming normal activities.

3. Will we see an economic boom? It almost doesn’t feel right thinking about the possibility of an economic boom when there are still 13-14 million people unemployed and stories of overwhelmed food banks across the country.

But if we can get another fiscal stimulus package passed to see people through until everyone gets vaccinated, there is a very real possibility of a boom shaping up by the end of 2021 heading into 2022.

The personal savings rate is much higher than it was pre-pandemic. The net worth for anyone who owns a home or a piece of the stock market is at all-time highs. People have repaired their personal balance sheets and paid down debt. Borrowing costs are on the floor allowing millions of homeowners to refinance. Housing prices continue to rise at a pace no one thought was possible when this all began.

And the government has spent trillions of dollars with more to come.

This isn’t like the Great Recession where there was a nasty debt and housing overhang. If and when things return to normal, we could see a massive surge in demand with people spending on the areas they’ve cut back on due to Covid.

I’m sure many are gunshy because of how this year has played out but the baseline expectation going forward just might be a much stronger economic environment than most people expect right now.

4. Should you book your travel now? Once the vaccine does get rolled out in a meaningful way one of the areas I think will benefit the most will be leisure and travel. The timing is going to be tricky on this stuff but I have a feeling prices are going to move higher in a big way once people realize things will open up again.

I’m hopeful one of the best investments I made was booking a trip a year in advance for this upcoming summer to take advantage of depressed prices.

Next summer (fingers crossed) could see a huge surge in backlogged vacations. It could be difficult to book for a reasonable price if you haven’t done so already.

5. When will Top Gun 2 finally come out? It’s no one’s fault but 2020 will probably go down as the worst movie year of the past 50 years or so. All of the big-budget movies got shelved, The studio says Maverick will be coming to a theater near you in July but I would have preferred an on-demand release in 2020. The same goes for A Quiet Place Part II.

Movie theaters are not going away but I’m not sure I’ll be going nearly as much as I did in the past. The studios should all just rip the bandaid off and do a simultaneous at-home/in-theater release and call it good.

At the very least you have to prepare yourself for a minor correction in 2021, even if there is no legitimate reason for it.

7. Will the housing market remain strong? The Case-Shiller index of prices for the 20 largest cities in the country was up more than 8% year over year, the highest reading in 6 years. For a leveraged asset, that’s a pretty decent return.

The frenetic pace of pandemic buying won’t last forever but a shortage of housing on the market combined with favorable demographics makes me think this move isn’t over by a longshot. 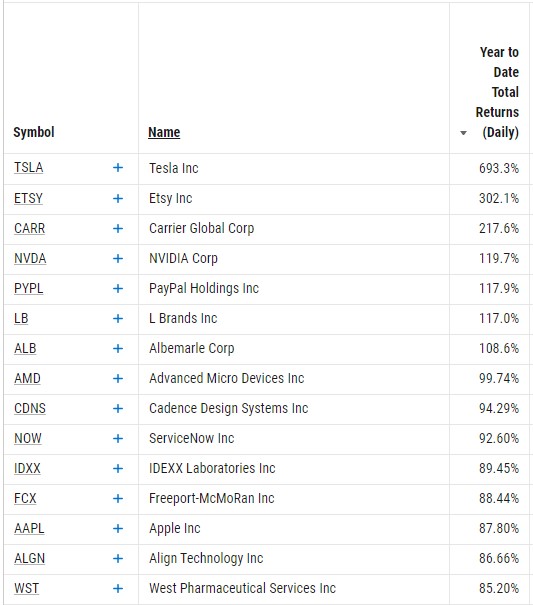 Tesla was far and away the best performer, skyrocketing all the way up to the sixth biggest company in the index (behind only Apple, Amazon, Microsoft, Google and Facebook in terms of market cap).1

There was a story in the Wall Street Journal last week about a guy who sold his house and used some of the proceeds to buy TSLA call options. There have been multiple stories elsewhere about individuals who put a small amount of money into the stock who are now millionaires.

This one has always been in my too hard pile but this company and its stock are fascinating to no end because of the extreme reactions it evokes in people.

9. What if we don’t get an uptick in inflation? These numbers are before taking into account the most recent trillion-dollar or so spending package (and the potential for a $2k check for households): 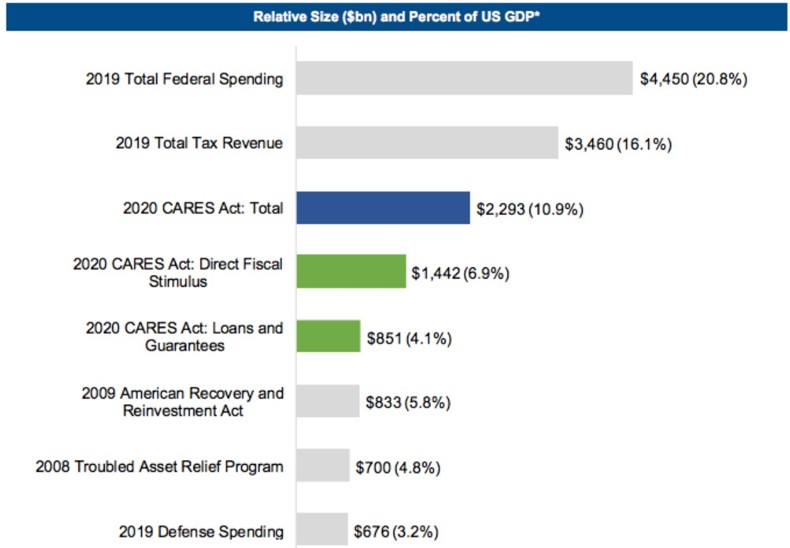 This spending was absolutely necessary and some (me) would say too small. But these are still massive numbers. Obviously, the pandemic is a unique situation.

But what if this situation doesn’t lead to a meaningful uptick in inflation? Doesn’t that show we have the capacity for even more spending? Couldn’t the government help those out there who are below the poverty line? What kinds of fiscal experiments could we try if there aren’t any serious adverse effects from these trillions of dollars in spending?

All I know is once the prospect of sending checks to households became fair game it’s inevitable this becomes a political platform going forward.

The genie is out of the bottle on this and it’s going to be interesting to see how far we take this in the years ahead.

1Tesla wasn’t actually added to the S&P 500 until this month but I just wanted to use this example to show how ridiculously strong their returns have been. More here.