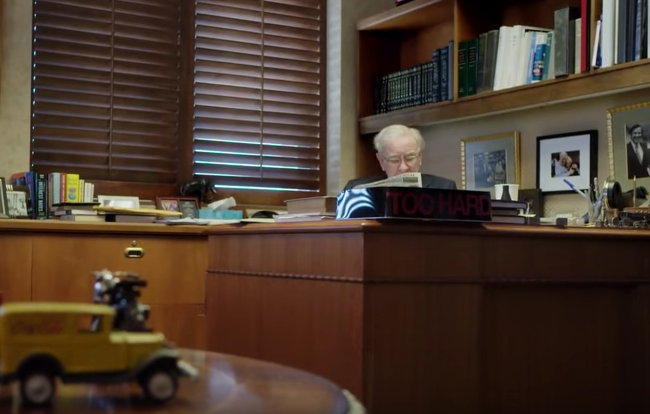 I finally got around to watching the Warren Buffett documentary on HBO last week. It was a tad on the slow side but if you’re a Buffett fan it’s worth watching.

At one point they showed a picture of his office which is fairly plain for one of the richest people on the planet. On the side of his desk, you can see a box with huge letters that reads, “TOO HARD.” Buffett is well known for his thoughts on staying within your circle of competence. In one of his old shareholder letters, he says, “The size of that circle is not very important; knowing its boundaries, however, is vital.”

It’s such a simple concept, but it can be extremely useful if you’re able to define those boundaries. This got me thinking about what falls in my too hard pile. Here’s what came to mind:

Finding companies with lasting moats and determining what they’re worth. When I first started investing I tried my hand at stock-picking. Like everyone else who reads The Warren Buffett Way or The Intelligent Investor, I was planning on holding a concentrated portfolio of companies with strong economic moats. I did a pretty good job picking through the rubble during the financial crisis but finding undervalued companies when the world is seemingly coming to an end isn’t all that difficult.

The hard part is figuring out who the winners and losers will be outside of a crisis situation. It’s hard work to dissect financial statements, talk to company management, come up with a general idea of what a company is worth, understand a company’s competitive advantage, and know its business well enough to make a guess on how long that moat will last.

I know there are people out there who can do this. There are far smarter people out there who make this their life’s mission and trying to do this casually on the side is never going to work. The competition to become the next Warren Buffett is so intense that it falls into my too hard pile.

Investing based on my intuition. I’m not good enough to use my random back pain or gut instincts to make investment decisions. The world is complicated enough before introducing emotions into your investment process. I need rules, filters, structure and processes in place to guide my actions so I can take my lesser self out of the equation as much as possible.

Guessing how geopolitical events will affect the markets. They say it’s not the news itself but investor reaction to the news that matters. Even if I could figure out in advance exactly what’s going to happen with all of the craziness in the world, I would still have a hard time figuring out how other investors would react to that news or understand what’s already priced in.

Picking the best alternative investment managers. I get a steady stream of requests from alternative asset managers to check out their presentation decks. I kindly decline these offers to save time for both myself and the person reaching out. I’ve been involved in this game in a past work life and know first-hand how difficult it is. Sure, there are a handful of professional investors out there who can pick the best private equity, venture capital, real estate, infrastructure or hedge fund investment vehicles but it’s a very short list. It’s hard enough to pick a single fund that will do well in the alt space but putting together a portfolio of them is a huge undertaking that involves a combination of skill, access, connections, luck, and timing. The dispersion between the winners and losers is so wide in this space that even with an excellent staff, due diligence process and investment acumen your chances of succeeding are still very small.

Figuring out the next new thing in tech. I love technology. It has made my life better in a number of different ways, both large and small. But I am not the guy who will be able to tell you who the winners and losers will be in this space. There are so many impressive ideas and companies — Facebook, Amazon, Tesla, Apple, Google, Netflix, etc. — but I wouldn’t be surprised either way if you told me in ten years these companies will still be industry leaders or new companies or ideas will take their place. It’s plausible that Tesla could be a ten-bagger or go bankrupt within the next five years. Uber, Airbnb, YouTube, Spotify, Twitter, Instagram, Snapchat or the iPhone didn’t yet exist in 2005.  There are very intelligent people in the tech and VC world who can do this but not me.

Bitcoin. No clue on this one.

Understanding “what the markets are telling us.” Lots of professional investors “read the tea leaves” to figure out “what the markets are telling us” at any given moment. Certainly, there are signals, relationships, red flags or divergences that matter. I just think that the majority of the time the markets aren’t telling us anything beyond the fact that they’re being moved around by different people, institutions, and corporations with conflicting goals, time horizons, risk profiles, opinions, strategies, wants, needs and abilities. Most of what happens on any given day, week, month or year is just noise and even that noise gets interpreted in different ways by different parties.

Negative knowledge is highly underrated in my book. Some of the most important decisions you make in life will be the:

Figuring out your own too hard pile is a decent way to go about this process.