Ben Carlson · Should Index Fund Investors Care About Tesla Being Added to the S&P 500?

The company’s stock responded by rising more than 10% on Tuesday at one point.

The stock is now up more than 420% this year which is wild considering it was down more than 60% in a 4-week stretch from late-February through late-March during the Corona Crash.1

Tesla is up more than 1400% over the past 5 years. Just look at the annual returns since going public in mid-2010:

Tesla’s returns are so strong many investors worry about the timing of adding the company to the index. Maybe all the gains have already been milked and index fund owners are being sold a ridiculously overpriced stock.

There were similar worries about Facebook’s addition to the S&P 500 in late-2013. Facebook’s stock is up almost 400% since then so that’s worked out just fine for indexers.

It is worth noting Facebook’s market cap was around $135 billion at that time while Tesla currently sports a market cap of more than $420 billion.

The question for index fund investors is this: should you even care about Tesla being added to the S&P 500?

If you hold a total stock market index fund, you already have Tesla as one of your core holdings and this change to the S&P 500 means nothing to you. Take a look at the top holdings for the Vanguard Total Stock Market Index ETF (VTI): 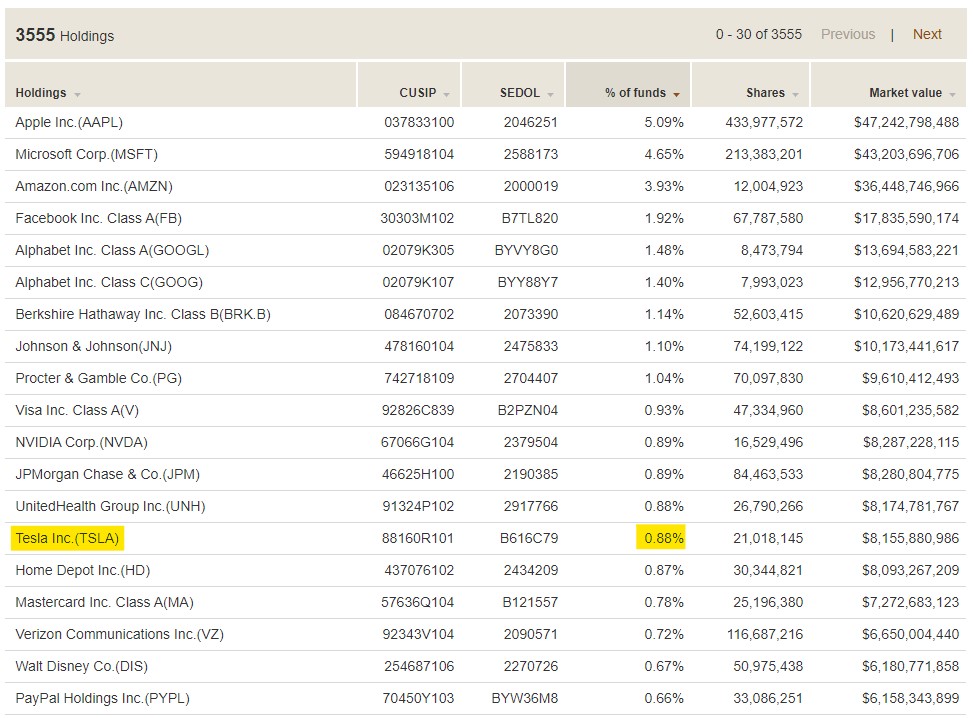 It’s in the top 15 of the biggest holdings out of the more than 3,500 names in the total U.S. stock market.

If we look at the difference in returns between the overall U.S. stock market (VTI) and the S&P 500 (SPY) this year you can see there is a slight difference: 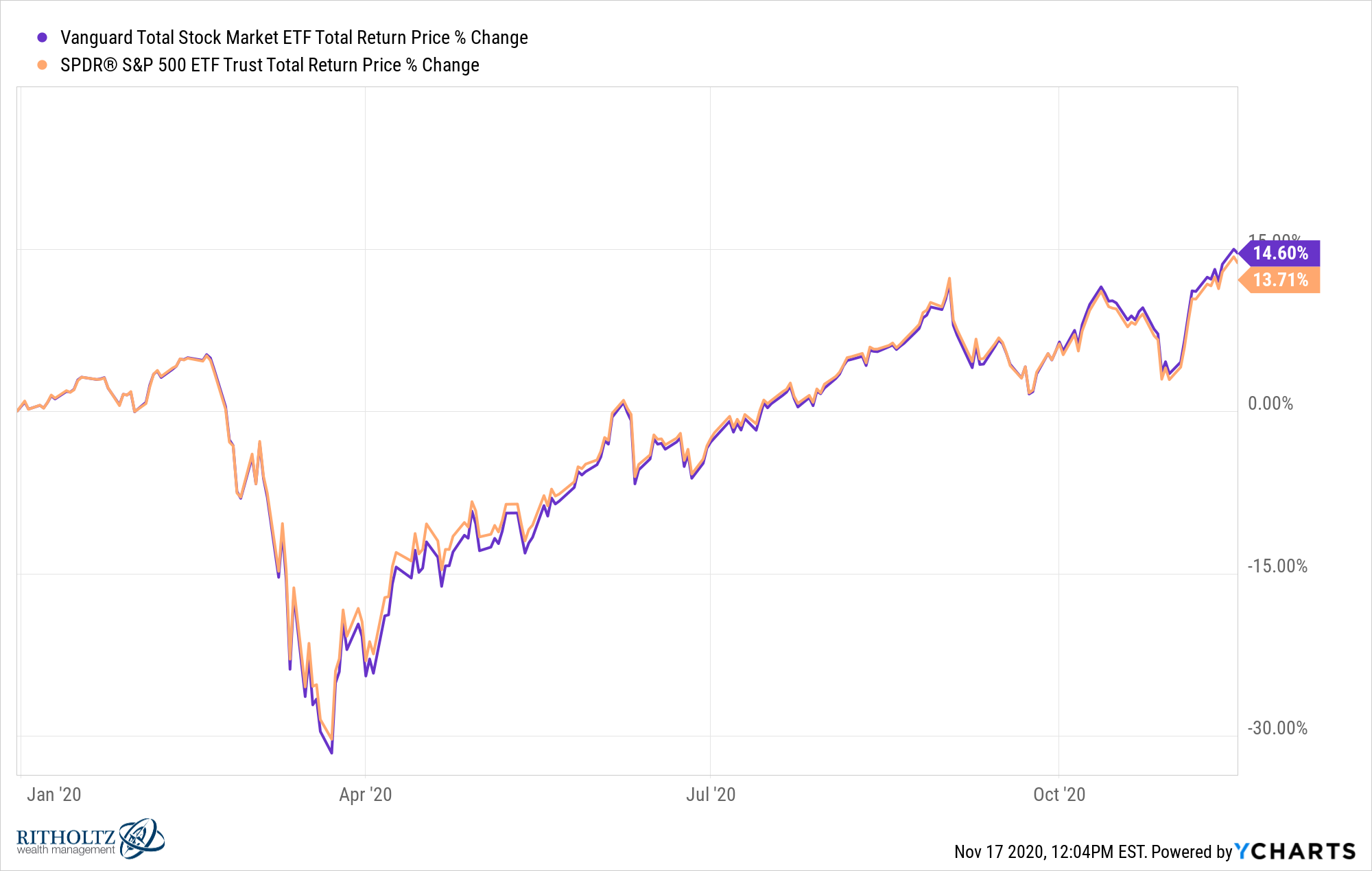 A total market index fund is outperforming the S&P 500 by almost 1% this year.

So how much of this outperformance is due to Tesla?

I put my crack research team (@EconomPic) to work on this one and they informed me Tesla is worth close to 0.8% of the outperformance this year. That’s not bad.

There are some other differences in these funds besides Elon Musk’s brainchild. A total stock market index fund has around 7% more of its holdings in small and mid cap stocks than the S&P 500. This means there are also some different weightings with the top holdings but these two funds are still fairly similar over time.

Tesla went public at the end of June 2010 so it was likely added to any of the total stock market index funds shortly thereafter. Here are the returns of the two funds since late-2010: 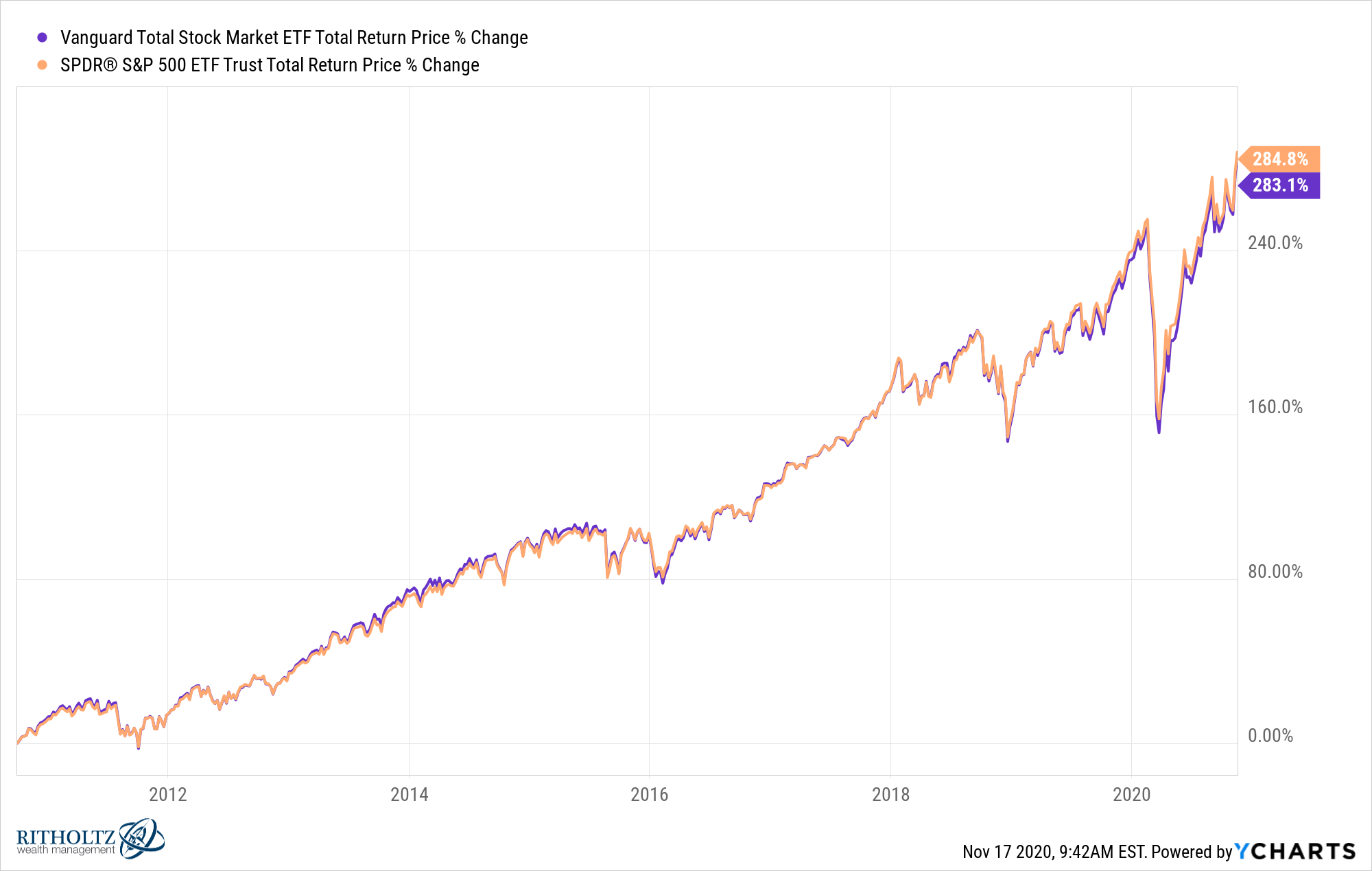 Interestingly enough, since the inception of VTI it has actually outperformed SPY by more than 60% going back to 2001: 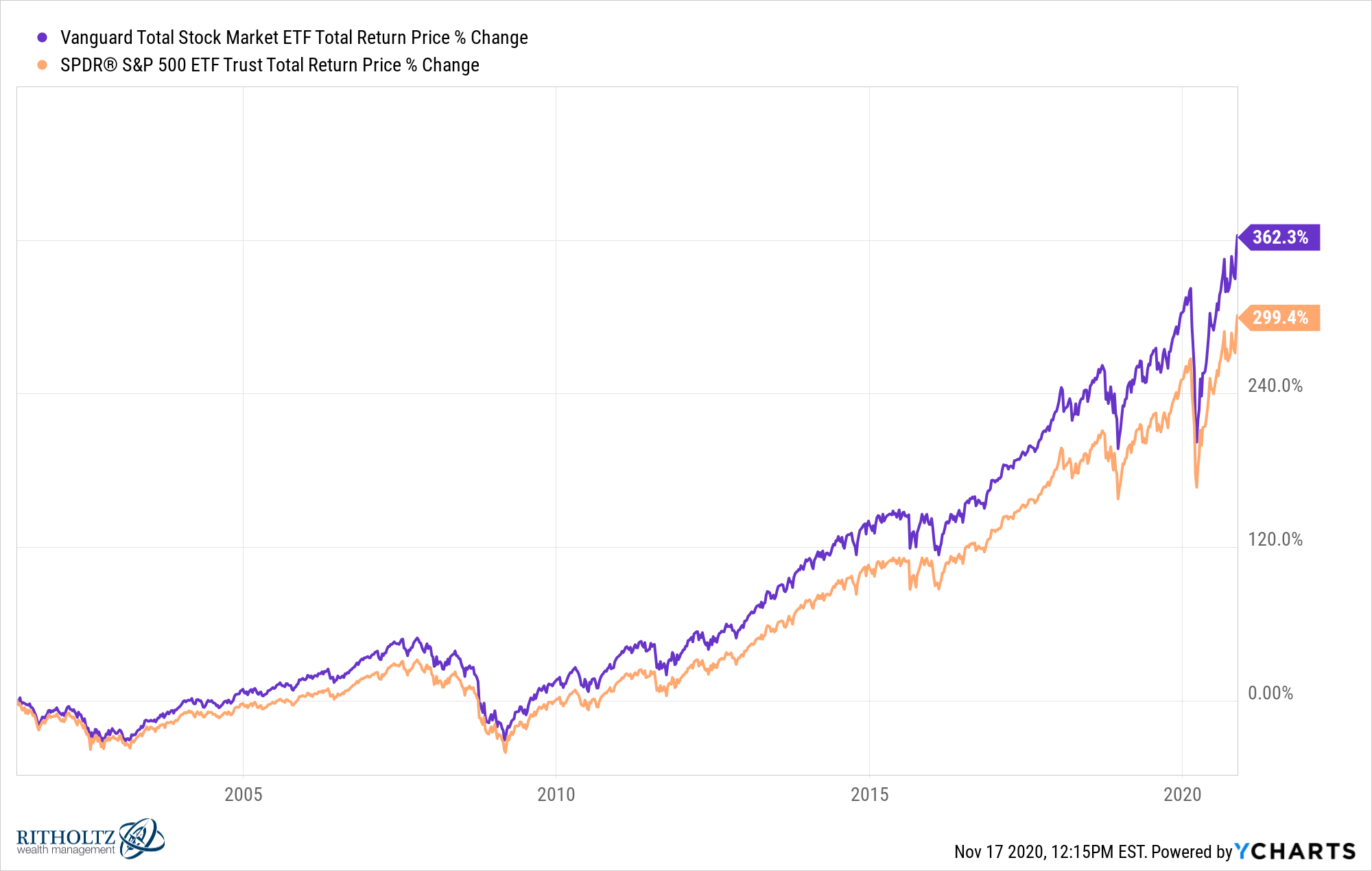 The simplest explanation for this outperformance is likely due to the strong returns in small cap stocks in this time: 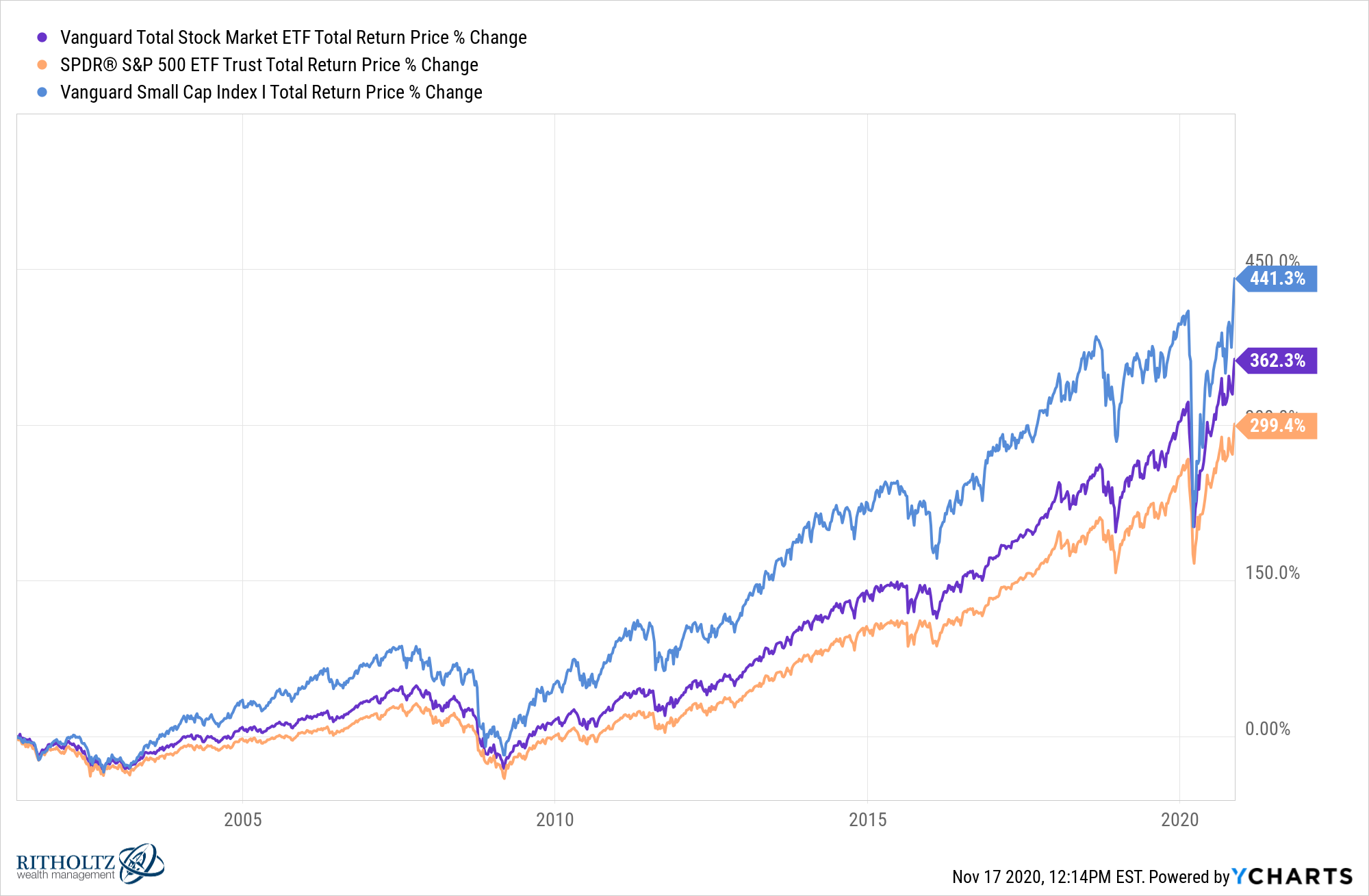 If we were to change the start dates this wouldn’t always be the case.

Sorry for the tangent…where was I?

Ah yes, Tesla the most loved and hated stock in history.

If you hold a total stock market index fund it doesn’t matter when the S&P 500 adds or replaces certain stocks. You’ve been a holder of Tesla shares for years now even if you didn’t know it.

If you own an S&P 500 index fund adding Tesla here may feel like you’re buying high. And maybe you are. But Tesla will likely make up a little more than 1% or so of your holdings. That 1% may add or detract from your returns in any given year around the edges but a single stock isn’t going to determine your performance over the long haul.

And if you’re diversified into other funds, strategies or asset classes beyond the S&P 500, that would make Tesla’s contribution to your entire portfolio even less meaningful.

Over the short-term individual companies, if they are large enough, can have an impact on your returns on the margin. But over the long-term no single name will determine your fate in a diversified index fund, for better or worse.

Further Reading:
Is Exxon the Next General Electric?