The past five weeks have seen jobless claims of 3.3 million, 6.9 million, 6.6 million, 5.2 million, and 4.4 million for a grand total of more than 26 million people who filed for unemployment.

That’s close to 16% of the entire U.S. labor force. When you add this to the 3.5% unemployment rate before the crisis we are fast approaching 20% unemployment in the blink of an eye. We’ll almost certainly break through that threshold next week.

The cumulative gain for the S&P 500 on the past five Thursdays, which is when the jobless claims are announced, is close to 11%. This past Thursday’s report is the only time stocks were down on one of these horrific reports, falling just 0.05%.

Couple this unemployment data with the obvious pain being felt throughout the economy right now and the stock market’s performance over the past month or so is beyond head-scratching.

Why in the world would stocks rally in the face of the worst economic data we’re likely to see in our lifetimes?

The simplest reason is the stock market can be one of the most confusing places on earth.

There have been plenty of times in the past when the stock market is seemingly out of step with the broader economy.

The stock market showed strong gains through both World War I and World War II, possibly the most uncertain of times in the past few hundred years.

Earnings growth has been negative 30 times since 1930.

This table shows a number of years where economic growth didn’t match up with the performance of the stock market. 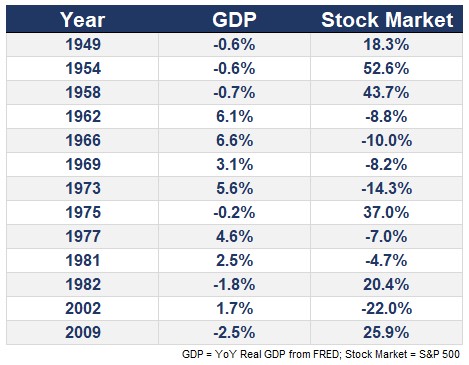 The reason this happens is fairly simple — economic data is backward-looking and the stock market is forward-looking. That’s easy enough to understand but the current situation still doesn’t quite feel right.

The strange thing about this period is we know for a fact the economic data is going to look awful.

Five or six weeks ago,  when most of the stay-at-home orders went into effect, you didn’t have to be a genius to realize the terrible impact this would have on the economy. This was the easiest recession to predict in history.

In past crises, you could look to certain data points for clues in the economy to guess what was coming but never something like this that was so telegraphed.

Maybe I’m giving the collective wisdom of the crowd too much credit here but the stock market fell 35% in 4-5 weeks in February and March. This was the fastest re-pricing in history.

You could argue that re-pricing should have been (or will be) worse but this was a massive drop in stocks unlike we’ve ever seen before in terms of how swift it was.

And now we’ve seen a massive bounce after all of that expected bad news came to fruition.

The stock market is often a confusing place and we live in confusing times.

Here are some other confusing scenarios that wouldn’t surprise me as we navigate this crisis:

Nothing would surprise me because this crisis is so unique. The under- and over-reactions are bound to be even more forceful than usual.

And maybe that’s the point. Everyone has an idea about how this crisis will or should unfold from here.

Investors make plans about what’s going to happen and the stock market laughs.

The market is likely to continue confounding investors of all shapes and sizes so it’s best to keep an open mind from here.

I have no clue what’s going to happen next and I don’t plan on guessing.

Further Reading:
What Could Cause Another Leg Down in the Stock Market?