Earlier this week, Morgan Stanley equity chief Mike Wilson told CNBC an earnings recession has arrived and the market is not ready for it:

“We are increasingly convinced that consensus earnings expectations for 2019 have further to fall and that the optimistic uptick currently baked into fourth-quarter 2019 estimates is unlikely,” Wilson wrote Monday. “A modest further decline in earnings will deliver the earnings recession we called for. Equity returns can still be positive in this environment, but they will likely be weaker than they otherwise would have been.”

It should be noted, strategists and analysts are typically overly optimistic about their earnings predictions (h/t Science of Hitting): 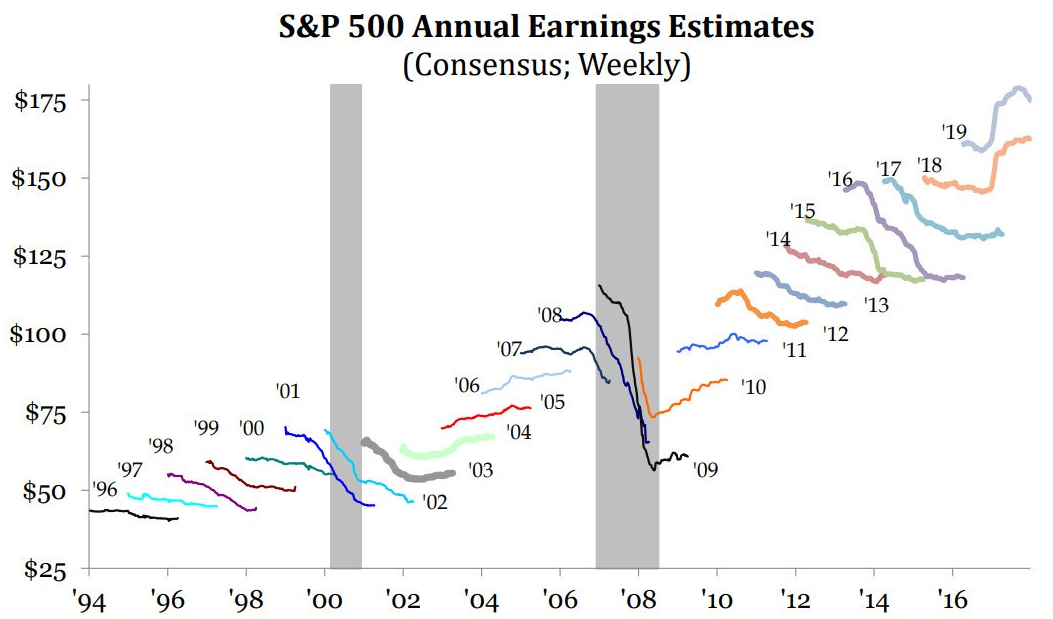 Forward earnings numbers almost always start out too high and then come back in as the year progresses. So maybe Wilson is simply getting ahead of the trend here.

Investors’ ears tend to perk up anytime the word recession gets thrown around and earnings are an important driver of long-term stock market returns as you can see from this table:

There are times when the relationship between the two variables looks strong — the 1930s, 1940s, and 2000s all tracked relatively closely.

So while earnings are important over the (very) long haul, even over decade-long periods, earnings aren’t the be-all, end-all when it comes to predicting what the markets will do.

A similar relationship exists when we look at earnings growth versus stock market performance on an annual basis:1 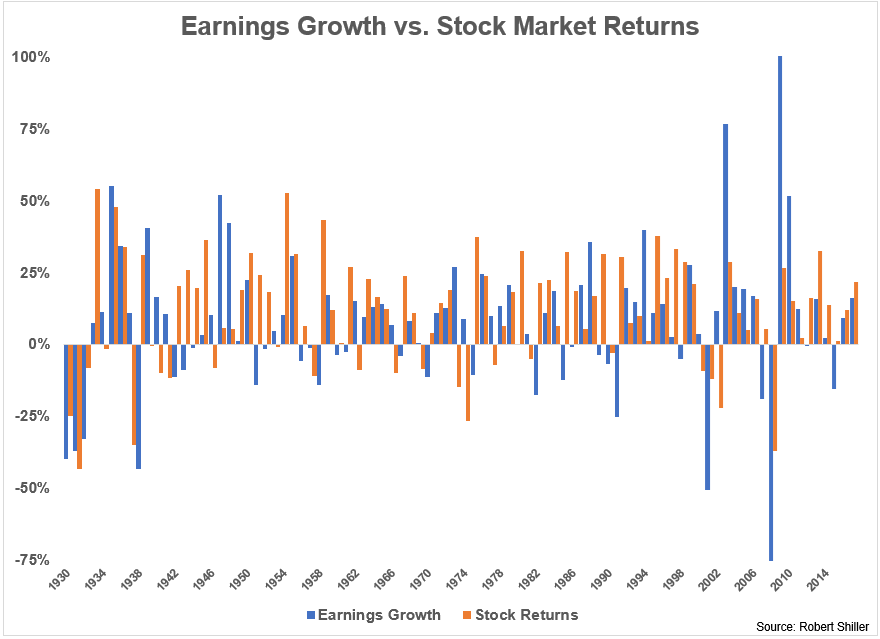 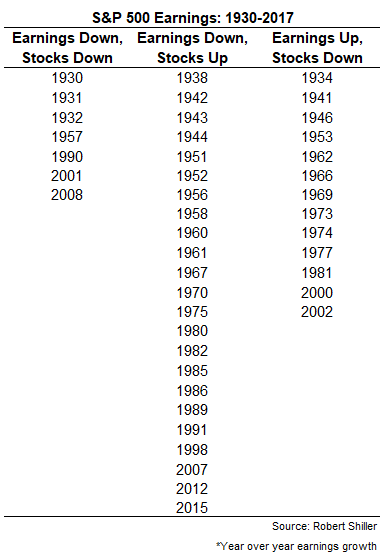 In 16 of those down years, earning growth decelerated by double digits. Of those 16 years, 11 of them were up years in the stock market. And the S&P 500 rose by double digits 8 times during a year when earnings growth was down double digits.

The obvious retort to these numbers is the fact that the stock market is supposed to be forward-looking. By the time earnings numbers are released that’s already old news. It’s been priced in already.

You could make the case that the reason stocks fell in 2018 is because they were pricing in earnings weakness in 2019. So I also looked at the performance of the S&P 500 in the year prior to each down year in earnings growth to see how clairvoyant the stock market is on earnings.

Stocks were down in just 12 of the 30 years prior to an earnings decline. So roughly 40% of the time stocks may have been signaling a coming problem with earnings.

Drilling down into this data led to some interesting findings in many of the years:

For all of these numbers, you could offer reasons or caveats as to why they seem so counterintuitive when taken at face value. There’s been inflation, deflation, disinflation, high interest rates, low interest rates, expansions, recessions, and everything in-between.

But that’s the whole point here. The stock market itself is counterintuitive and any single fundamental variable won’t tell you exactly how healthy it is at any given moment. Earnings are a huge piece in the overall stock market equation, but expectations about those earnings and how investors react to them tell the bigger story.

2Numbers for 2018 are only updated through September 30.