On Sunday I wrote the following:

It’s possible the stock market could see a sustained downturn if the pandemic continues to get out of control, a vaccine is further away than expected or the economy experiences another setback.

I’ve lost my ability to be surprised in 2020 so this certainly isn’t out of the realm of possibilities.

But this realm of possibilities could also see investors completely ignore elevated valuations and send markets to the stratosphere because of ultra low interest rates, a potential vaccine, a possible post-Covid spending boom, a huge fiscal stimulus plan from our new president or a continuation of a rising stock market in the face of terrible news.

The “smart” money has been bearish on the stock market for some time now while the young upstarts at Robinhood have been basking in the glow of seemingly ever-rising stock prices.

Watching other people get rich not only introduces career risk into investment decisions, it also gnaws at your psyche from a behavioral perspective. One of the biggest reasons FOMO exists is because it doesn’t seem fair.

Buffett is right that bubbles are a permanent part of the system in which we invest.

It wouldn’t shock me if the events of 2020 lead to a massive bubble from some combination of low rates and investors seeing people “dumber” than they are getting rich.

Then on Monday, the big vaccine news from Pfizer hit.

I believe this is a possibility…but obviously not a foregone conclusion.

When I put this out on Twitter, Jim Bianco threw some cold water on my theory:

At first glance, it’s hard to imagine how an economic boom could actually be bad for the stock market but Jim’s pushback here has some merit. There are always risks in the financial markets, even when there is potentially good news.

First of all, it’s important to note that interest rates rising in and of themselves is not necessarily a bad thing for stocks (or bonds for that matter). I wrote about this a few years ago:

The average performance of the S&P 500 during these past rising rate environments was almost 22 percent in total returns. Only three times did stocks fall when the 10-year rose by 1 percent or more, and the largest losses were just under 2 percent. So stocks have held up well in the face of rising interest rates over the past 50-plus years. 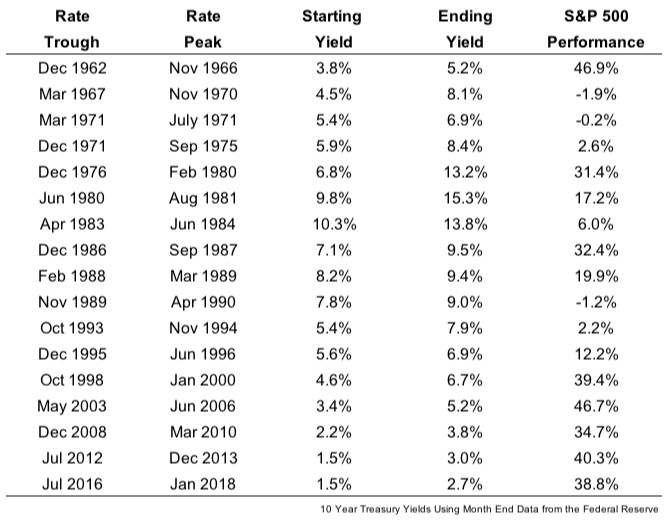 To Bianco’s point, it’s inflation, not rising rates that present a risk to the markets. I looked back at the calendar year returns for the S&P 500 from 1928-2019 to see how the stock market performed under two different inflation scenarios:

You can see stocks have done much better during years when inflation is below 3% than when it’s above 3%. And if we looked at these returns on a real basis, the differences would be even wider because real returns take inflation into account.

You get similar results breaking things down by rising or falling1 inflation:

Disinflationary periods have been shown to benefit the stock market while rising inflation is seen as a negative.

So an economic boom combined with above-average inflation could eventually become a risk to the stock market. And higher inflation would be bad for the bond market as well because rates are so low and fixed income investors are punished during inflationary environments.

Of course, the level of inflation we’re currently dealing with is worth mentioning in this discussion: 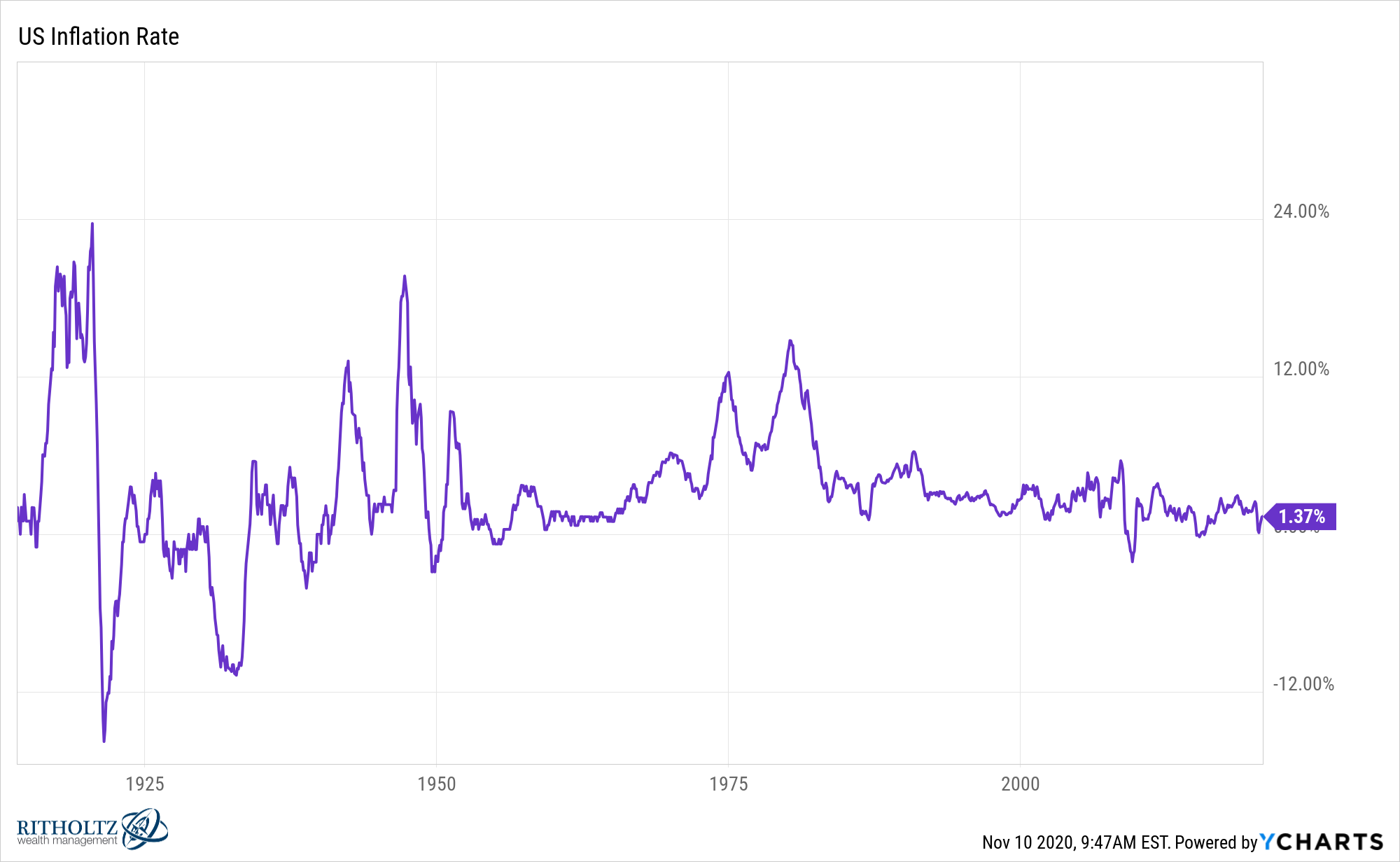 This is still relatively low by historical standards. And remember, the Fed is targeting inflation of moderately over 2%, not exactly a 1970s scenario.

Maybe they chose that range because it has produced the highest average returns for the stock market over time.2 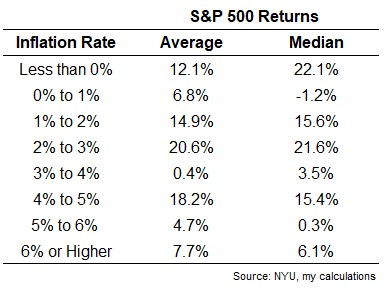 It’s worth pointing out we have a relatively small sample size here of inflation regimes so take this with a grain of salt like all backtests.

And maybe this is all a moot point anyway. The Fed has been trying to get inflation off the ground since the Great Financial Crisis ended and it hasn’t succeeded.

But if we do get even a minor boom following the pandemic it will be interesting to see how if the Fed can thread the needle if inflation does get up off the mat.

So much of this current environment is unprecedented so we don’t really know how investors will react. Rates have never risen from such low levels before. Government debt has never been at these levels either.

Balancing the need for low rates to finance the government’s ballooning debt load with the desire to boost economic activity will be quite the challenge for Jerome Powell and company at the Fed.

Personally, I would much prefer dealing with the ramifications of an over-heating economy than the alternative. So many individuals and businesses are still hurting from the impact of the pandemic that an economic boom would be preferable even if it poses risks to the markets.

I’m sure the Fed would prefer higher inflation to the prospect of deflation and another recession whether that’s good for the stock market or not.

1As defined by the annual inflation rate compared to the previous year’s annual rate.