Some questions I’m thinking about after a wild week:

Does the stock market care about anything anymore? We are still in the midst of a global pandemic that is only getting worse, oil prices went negative in the spring and we just went through a contested presidential election.

Yes, the stock market plunged nearly 35% during those tumultuous days of February and March but it still boggles the mind how much we’ve gone through this year and the stock market has given a collective shrug based on where we stand.1

What will it take for interest rates to rise? You want to know what stocks actually care about? Look no further than the level of interest rates, which remain ridiculously low: 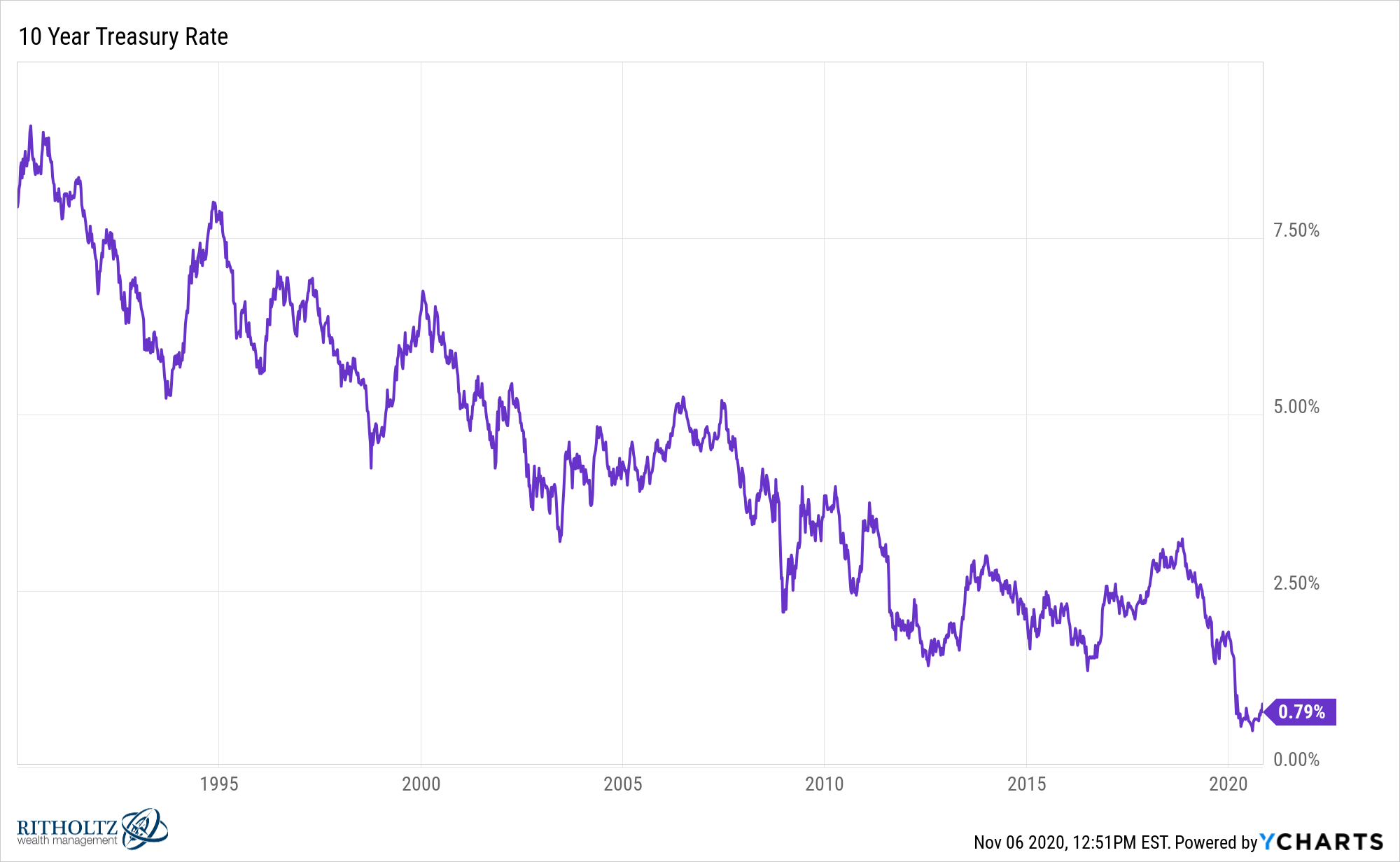 If there is one simple explanation beyond the government stimulus for the continued strength in the stock market, look no further than the lack of alternatives to invest in.

Rates are so low that people began to worry when they briefly popped above 0.9% on election night. We live in a strange yield environment when rates approaching 1% are considered high.

So what could be a catalyst for higher rates? How about:

Unless we see some massive fiscal stimulus combined with a post-pandemic spending/hiring boom, the Fed will likely do its best to keep rates low for the foreseeable future.

Does the Fed matter more than the president for the markets? Yes. Next question.

Are we really going to see a replay of the current market cycle? There was a sharp but brief sell-off of tech stocks over the last few weeks, culminating with a loss of more than 5% last week alone in the Nasdaq 100 (it was down 11% in total from previous highs in early September).

Those losses were all but erased in no time as the Nasdaq 100 surged 4.5% the day after the election and another 2.6% the following day, good enough for a two-day gain of 7.2%

Some people would like to believe you can predict what will happen in the years following a new presidential term based on the market’s initial reaction to the election. I think it’s always impossible to predict what the stock market is going to do, especially around an emotionally-charged election in which a number of investors came into it with hedges in place.

This seems like a simple case of certain stocks getting beaten down in anticipation of volatility that never came so those trades were quickly reversed.

I haven’t the slightest what the next four years will look like for the markets and neither does anyone else.

Are we going to see a slowdown until we get more fiscal stimulus? There are still millions of people out of work. We still don’t have the pandemic under control. I’m guessing we’re at least a few months away from any meaningful stimulus. It’s possible we could see a mini-slowdown in the meantime if a Covid outbreak causes more states to shut some places down to get things under control.

When does the vaccine arrive? This feels like THE economic question at the moment. But also who is going to get it first? How long will it take to be administered to enough people to make it effective? How does the government help convince people that it’s safe?

Are we setting up for a massive spending boom after the pandemic? A possible pre-stimulus, pre-vaccine lull in economic activity could get people feeling bearish on the U.S. economy right before we see a post-Covid boom.

At the end of the second quarter, U.S. household net worth hit a new all-time high. During the worst quarterly economic contraction on record in this country, households were able to repair their balance sheets because the government made it rain dollar bills. The housing market is going nuts. Borrowing rates are as low as they’ve ever been.

Savings rates are also abnormally high because of this (and the fact that people aren’t spending in certain areas like they would in normal times): 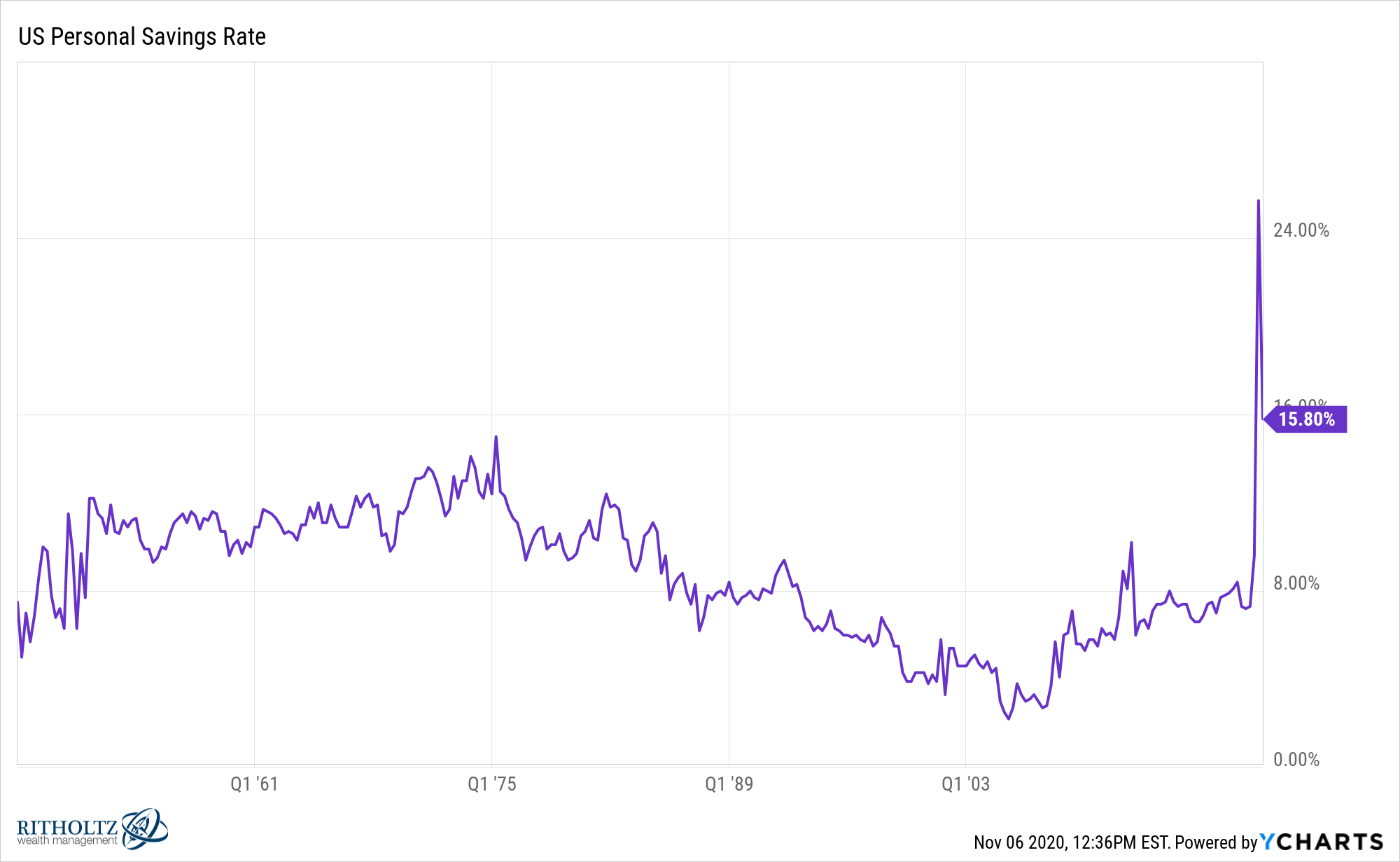 Let’s say we actually see some good news in 2021 and get a vaccine that works. I think it’s possible we could see a collective sigh from the American people in the form of spending their faces off on vacations, travel, and other things we haven’t been able to do for going on 8 months now.

It’s been a tough year for people. I could see millions of Americans decide they deserve to splurge a little once this pandemic is over.

Further Reading:
7 Things That Will Matter For the Markets Going Forward

In this week’s Animal Spirits video, Michael and I talked about why it’s so difficult to trade the election results:


Be sure to subscribe to The Compound for more of these videos.

1And yes I know there was an unprecedented amount of monetary and fiscal support to help see this through. I still find it amazing stocks were able to look over the valley and continue to charge higher even as the Covid numbers have moved higher throughout the year.