Timing the market is hard for a plethora of reasons.

Markets are right more often than people give them credit for. The direction of the stock market is impossible to predict in the short-term. And even if you get lucky by getting out at the right time you still have to get back in at some point. Market timing requires being right more than once.

But the degree of difficulty for market timing is even higher than most people assume because investors typically look to jump in and out when emotions are running high. Making decisions about your life savings when your emotions are steering the ship is a recipe for portfolio disaster on most occasions.

Here are the five times when the siren song of market timing tends to be the loudest.

1. Bear markets. Do investors panic and sell because stocks are going down or do stocks go down because people are panicking and selling? A little of both I guess but there’s a reason volatility tends to cluster during down-trending markets. Emotions run higher when prices are going down because losses hurt far more than gains feel good.

When the stock market is falling it feels safer to move to the comfort of cash. The problem is cash becomes addicting during volatile environments so it’s actually harder to put that money back to work even though your expected returns rise the lower stock prices fall.

2. When you’re retired or about to retire. Risk means different things to different investors depending on what stage in life they’re at. If you’re a young person with many years ahead of you before retirement, you should welcome losses in the stock market. If you’re going to be a net saver, stock market volatility is a good thing because it allows you to buy in at lower prices.

But if you’re someone who is retired or approaching retirement your mindset is completely different. You don’t have as much human capital to fall back on so it’s harder to wait out bear markets since you’re not putting new money to work at depressed prices.

Your financial assets are also likely at or close to their peak so you don’t want to screw anything up. Many people in this situation are constantly thinking about taking all their chips off the table in the hopes they can miss out on any potential large losses in the stock market.

3. Bull markets. There isn’t nearly as much panicking involved with bull markets as you get during bear markets but the fear of missing out can become pervasive when stocks are going up for long stretches of time. And since we’ve seen the stock market get chopped in half twice this century calling market tops is now a cottage industry.

Trying to sell before the market peaks is now as tempting as ever because markets have been so volatile in recent cycles.

4. When you have a lot of money. This is similar to the plight of the retiree but getting to the point where you’ve managed to save a substantial amount of money can shift your mindset from growth to preservation. Even if you continue to work and set aside money for the future, there are diminishing returns after a certain level of wealth is reached because any future savings won’t make much of a dent in your overall wealth.

When wealth preservation trumps the need to build wealth it can be tempting to time the market because the dollar amounts of your losses are so much larger than they were when you were in growth mode.

5. Presidential elections. Politics are the new religion for many people today so it seems like every four years the drumbeat of election-based investment strategies, worries, and hopes grow louder.

The Wall Street Journal had a piece this week that detailed a survey of investors with a million dollars or more at UBS. A majority of these investors claimed they have changed their portfolio ahead of the election: 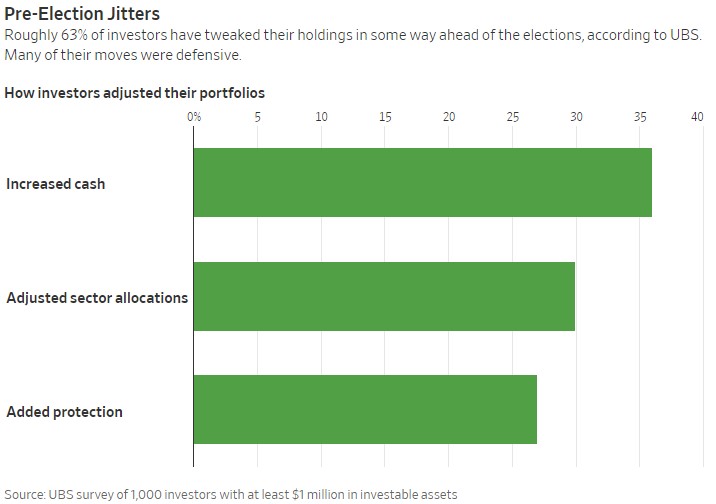 Granted, this is a survey of 1,000 investors at UBS with at least $1 million in assets. And this is just what these people say they did with their portfolio, not what they actually did. Watch what they do not what they say. Some people may assume it makes them sound more sophisticated to say they hedged their portfolio ahead of the election.

But I don’t doubt that there are a large number of investors who either have made changes to their portfolio or would like to because of the way they view the potential outcome of this election.

Not only are our politics becoming more emotionally-charged but people want to be able to say they predicted what happened. And what better way to have some skin in the game when it comes to the election than changing the way you’re money is allocated.

If you think about what’s transpired in 2020, we’ve already hit on three of these market timing issues. There was a bear market earlier in the year followed by a rip-roaring bull market and now the election. And if you’re a retiree who has managed to set aside a decent pile of money, you hit the daily quintuple for market timing invitations.

The market gods are begging you to make wholesale changes to your portfolio this year.

I’m not here to talk anyone out of making changes to their portfolio if their risk profile or time horizon has changed.

It’s never easy to time the market but it’s harder still when you allow your emotions to dictate your actions.