Scurvy is a nasty disease that begins with bruising and bleeding of the gums, which eventually leads to decay and rot in your mouth. If left untreated, from there you can experience bleeding from the skin, exhaustion, swelling, infection and finally, death.

The disease is brought about from a deficiency of Vitamin C in your diet so it’s easily treatable and not very common today but people didn’t know about this simple fix before the late-18th century.

Scurvy proved quite deadly to sailors when Europeans began exploring the Indian and Pacific oceans for new discoveries. Magellan lost more than three-quarters of this crew crossing the Pacific in the 1500s on one long voyage. Vasco da Gama lost two-thirds of his crew on an expedition to India.

No one knew how to deal with this deadly disease until Captain James Cook stumbled upon an accidental cure in the 1700s.

Captain Cook noticed Dutch ships didn’t have nearly as many sailors dying from scurvy as those on ships departing from England. The biggest difference between the two groups in terms of their supplies was sauerkraut. The Dutch were always loading up barrels of the nutrient-rich cabbage before their long voyages.

Cook figured it was worth a shot to try a new diet to see if that would help.

The problem is the English sailors were stuck in their ways. They were used to their standard meals and booze, which contained little in the way of Vitamin C. Cook needed to figure out how to get them to change their diet to include sauerkraut.

The crews of these ships were becoming suspicious of long trips because they knew scurvy was a possibility so Captain Cook didn’t want to straight-up tell them he had a possible cure for the disease. He wanted to avoid a mutiny so he had to trick them into eating healthy food packed with Vitamin C.

Cook decided to use scarcity as a tactic by only serving sauerkraut to the officers on the ship but not the rest of the crew. Once the men realized the officers were getting special treatment he told the crew they could have it, but only once a week. It became a delicacy instead of something they were forced to consume.

Once it was included in their diet he slowly introduced the cabbage into more meals. From that point forward Cook could take his ships on long voyages without seeing his crew become ill from scurvy.

If we were always rational there would be no use for such psychological tactics but we are only human so there are times when we need to trick ourselves into good behavior to improve our lot in life.

Saving for retirement falls under this category. It’s difficult to get people to think about their future self many decades into the future.

Why should I care about enjoying life in retirement when I can enjoy life now?

This is hard to argue with until you actually reach an age where you no longer want to work and face a declining standard of living.

So how do we get people to save more?

Take the decision out of their hands and make it automatic because people generally take the path of least resistance.

We see similar divegences between those employers who offer automatic vs. voluntary enrollment for their 401(k) plans. Here’s the comparison from the latest How America Saves research from Vanguard 401(k) plans: 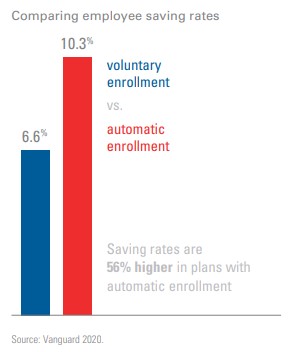 Forcing people to opt-out instead of opting-in can make a huge difference because most of the time people simply do whatever takes the least amount of heavy lifting. That’s a 56% boost in the savings rate by making this decision automatic.

And this works for those just starting out as well. Vanguard found employees under age 35 who make less than $50,000 a year had a savings rate that was twice as high when their employer used automatic enrollment instead of voluntary enrollment in their retirement plan.

Inertia is one of the biggest enemies of behavioral change.

Employers actually have more power in shaping the saving and investing decisions for their employees than they realize.

They can not only automatically enroll their employees into the plan, but set higher default savings rates, use diversified default investment vehicles such as low-cost targetdate funds, offer a decent company match and utilize automatic escalation to slowly increase the amount employees save over time.

The burden for retirement has shifted in recent decades from employer defined benefit (pension) plans to employee defined contribution plans. But employers can still play an important role in shaping better outcomes for their workers.

Further Reading:
Some Good News For Retirement Savers For Once