We humans have an insatiable desire to predict the future. This desire gets even worse during bad times.

I have opinions just like everyone else but I truly don’t know how the current economic mess is going to shake out.

I do have some questions though:

How long will good news be bad news for stocks?

Most days in the stock market are random in terms of why it’s higher or lower.

But sometimes a piece of news or economic data comes out that clearly impacts stock prices.

On Friday, the employment data came out stronger than expected. The unemployment rate actually fell, despite the Fed’s best efforts.

Why did stocks fall on good economic news?

The Fed is trying to slow the labor market to slow inflation.

What if companies just went through laying off a bunch of people during the pandemic and had such a hard time finding workers these past few years that they don’t want to turn around and do it again so soon?

The Fed wants to make the unemployment rate go higher. They keep telling anyone who asks that they want people to lose their jobs to bring supply and demand back into balance so inflation will fall.

I’m not a fan of this plan but they don’t care what I think.

Regardless, I’m worried about what happens if the Fed’s plan doesn’t work, at least for a while. 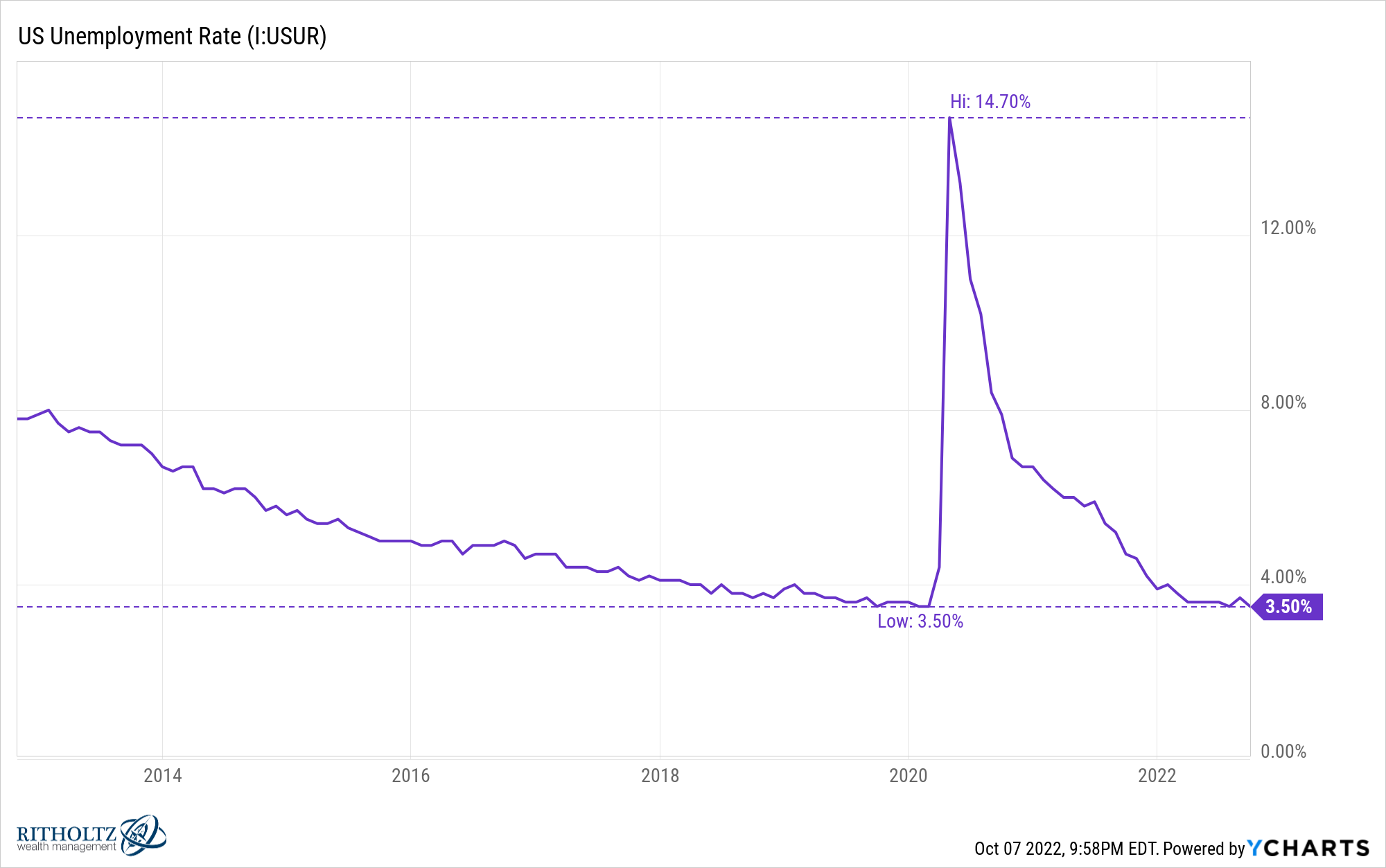 We don’t have to rehash the reasons for this abrupt change in employment but many businesses have spent the years since this happened frantically trying to fill those roles.

And while we have had one of the fastest labor market recoveries in history, it hasn’t been easy for many companies to find good help these days.

For the past year and change there have been far more job openings than people looking for work, an unprecedented development in the labor market: 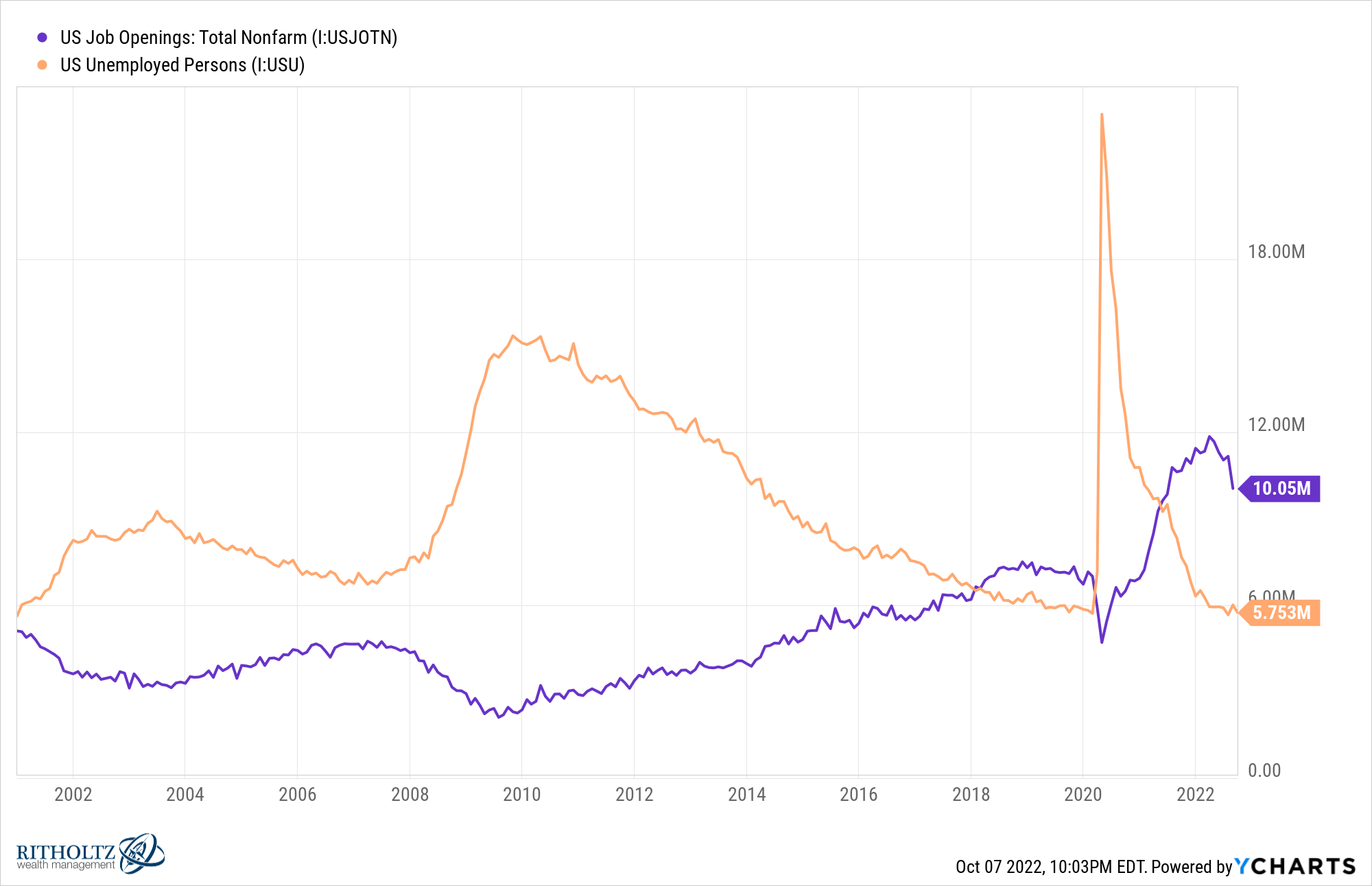 So what happens if most of these businesses say, “Screw your interest rate hikes, Jerome. It took us almost 3 years to finally staff up, there’s no way we’re firing all of them now that you want a recession.”

Does the Fed simply keep raising interest rates to obscene levels to force their hand?

What if everyone assumes this is just going to be a shallow recession so they don’t want to ruin their business in the process?

There have already been some layoffs in specific sectors like technology but I worry about how stubborn the Fed could be if businesses don’t do what they want them to do, which is fire some of their employees.

How many businesses want to go through the process of firing and then re-hiring a bunch of their employees less than three years after they already did that and it wasn’t such a pleasurable experience?

Who blinks first — employers or the Fed?

Is Welcome to Wrexham the best new show on TV this year?

I was never a big soccer guy growing up. My high school was so small we didn’t even have a team. And even if we did, football was so big no one would have paid attention to it.

I’m a late bloomer but have finally come around to the beauty of this sport. My oldest is only 8 but I love watching her play soccer.

My newfound love of the sport partly explains my affinity for the new FX/Hulu show that follows Ryan Reynolds and Rob McElhenney as they navigate becoming new owners of a Welsh soccer club.

The show has sports, comedy, heart, characters and excellent story-telling.

How are we ever going to increase the supply of homes in this country?

For a decade following the Great Financial Crisis, we didn’t build enough homes because homebuilders were so scarred the housing bust. 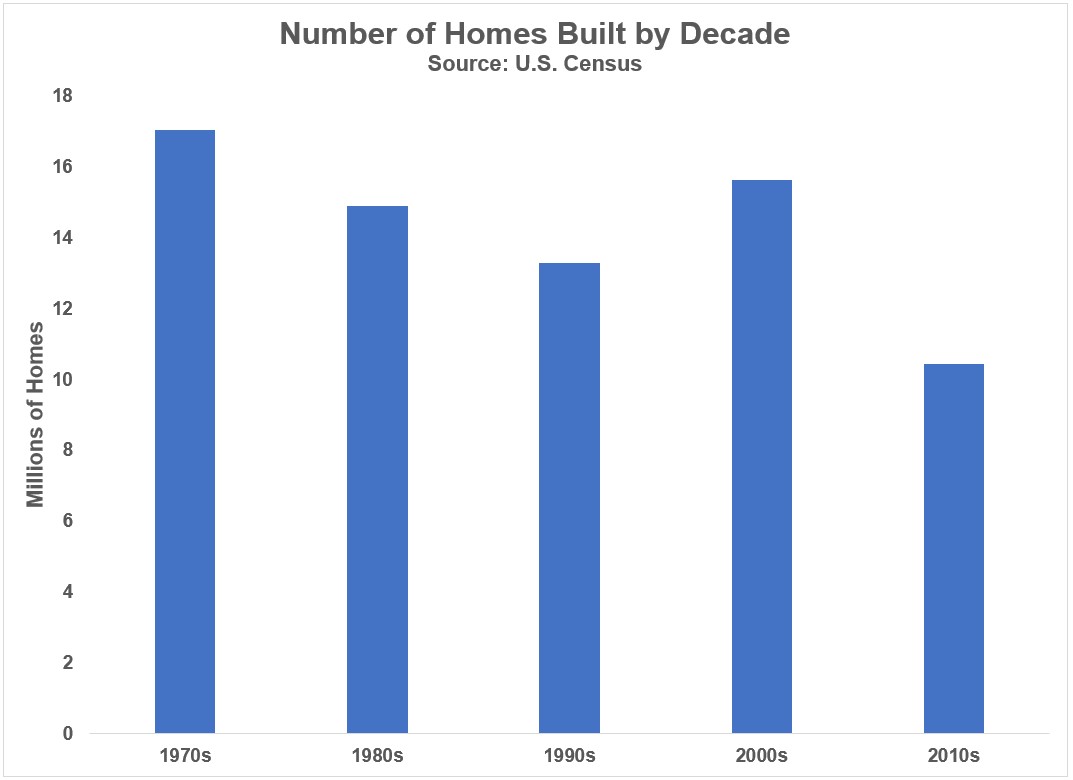 I can’t imagine things are going to be much better in the 2020s, despite the millennials now being the biggest demographic in the country and ready to buy.

Homebuilders basically had an 18 month window of insane demand that is falling off a cliff now that mortgage rates are 7%.

How could we ever expect them to build enough houses if their business goes from boom to bust and back to quickly?

One of my biggest worries is an entire generation of young people is going to be forever pissed off about the state of the housing market.

Housing prices went parabolic. Rents followed (on a lag as they usually do). Now mortgage rates are ridiculously high.

Is Ethan Hawke the most underrated actor of his generation?

The Smartless guys interviewed Ethan Hawke on a recent episode and talked about all of the wonderful movies he’s given us over the years.

His IMDb page isn’t flawless but the guy has had fantastic movies at every stage of his career:

The quality and longevity is impressive.

Are we sure a recession is better than the current situation?

I understand. No one likes inflation. Maybe shutting down the party early will prevent something worse that could build up down the line.

But for the first time in decades workers actually have some leverage over employers.

The lowest wage earners are seeing the biggest wage gains: 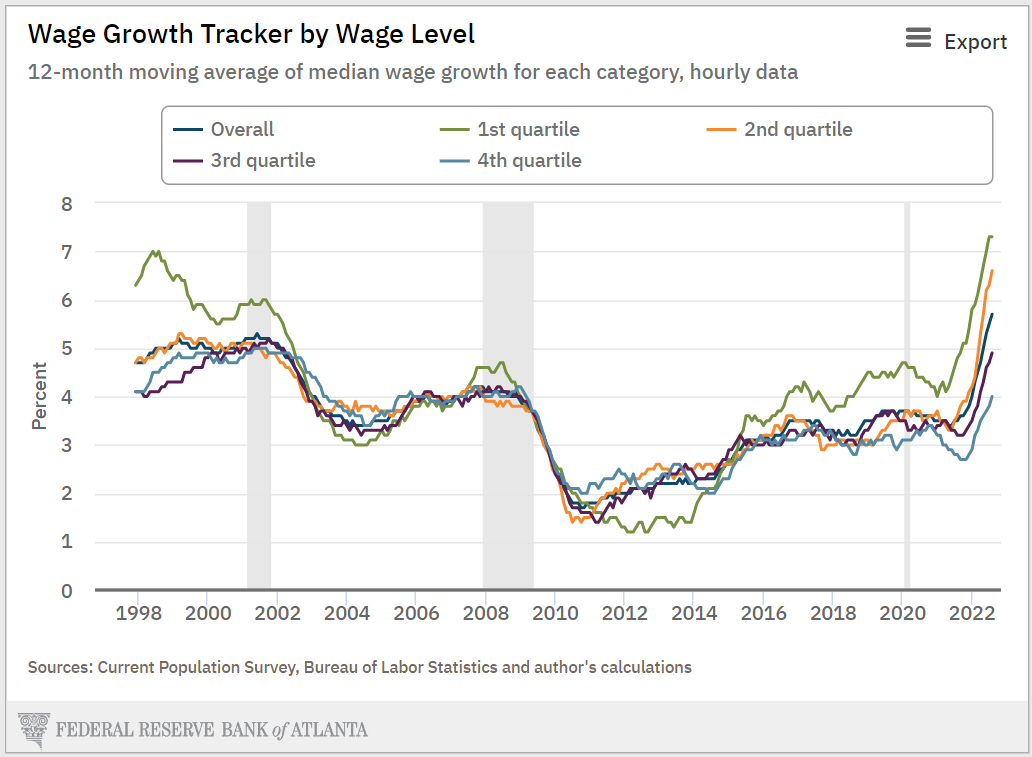 Yes, I know these gains are currently lagging behind the latest inflation reading.

I just think there are way more bad unintended consequences with putting people out of work than giving the current economic experiment a little more time to iron itself out.

Maybe I’m wrong but I don’t see the need to snuff this out so quickly.

Further Reading:
What Is the Fed Doing?