Scary or sad retirement statistics are a regular occurrence in the financial media so it’s nice to see some good news in the space every once and a while.

Vanguard’s new How America Saves report for 2019 offers a glimmer of hope for those saving for retirement. Retirement savings have a long way to go but things are heading in the right direction.

I went through this 100+ page report about Vanguard’s 401k plans. Here’s what I found:

These fund of funds that change their asset allocation as you age are probably the most important mutual fund type offered to retirement savers right now. They’ll continue to grow in importance, especially since the majority of plans now have them as their default fund choice.

The other default option that will hopefully include all retirement plans someday is automatic enrollment: 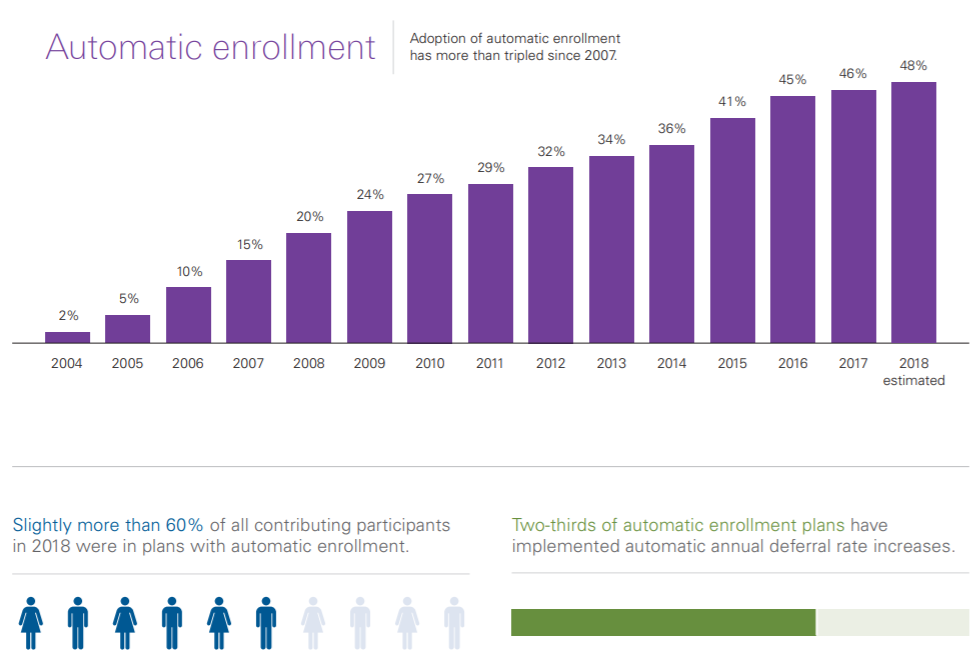 If we can’t force people to save for retirement the least we can do is make it easier for them to be included in their workplace plan.

I also love the fact that the majority of those who are in automatic enrollment plans also have automatic increases built into their savings rate. Getting people signed up to save and then slowly increasing those savings rates over time can have an outsized impact on the retirement savings for a lot of people. I hope this trend continues.

The differences between plans that have auto enroll and those who don’t are stark in terms of participation: 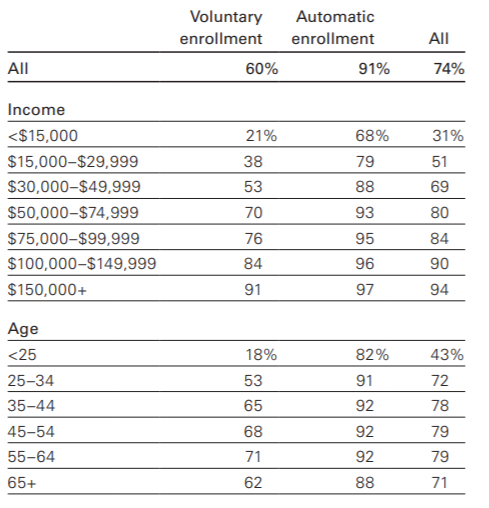 This is especially true for those who don’t make a lot of money. That nudge of making them opt out instead of opt in is huge when you consider the number of people at a lower income scale who don’t save for retirement when they’re not auto-enrolled. It looks like young people need that nudge in the right direction as well.

I would love it if the government would take this a step further and auto-enroll everyone who earns a paycheck (with the option to opt out obviously) in the TSP but that’s a pipe dream. 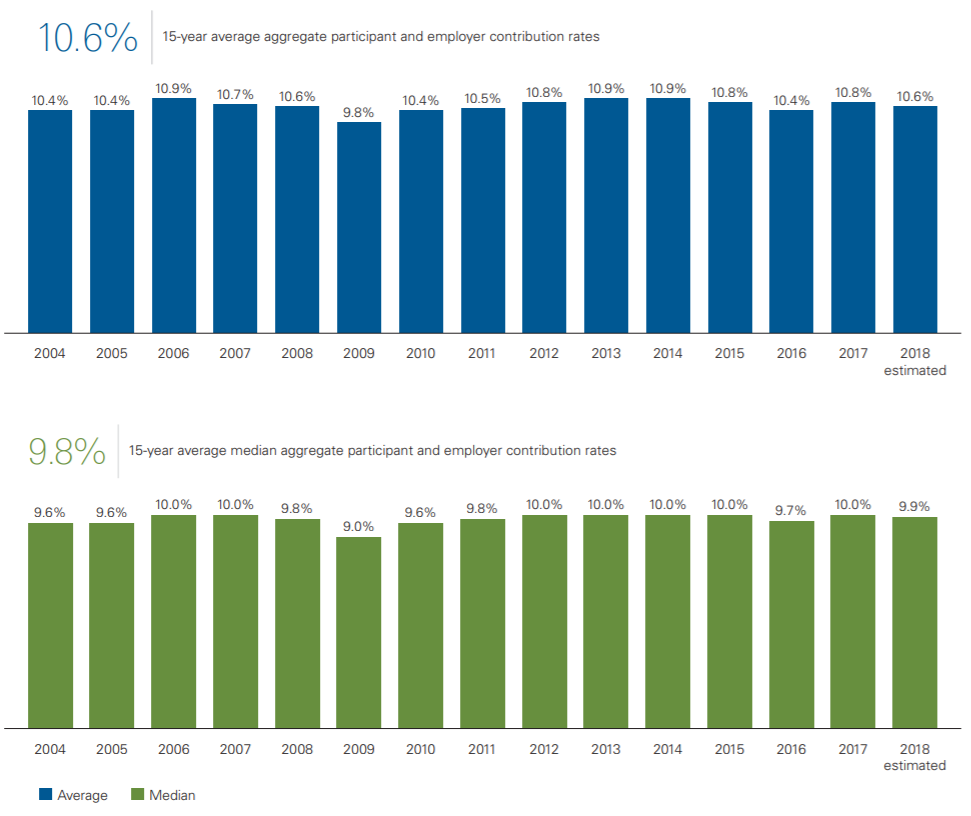 Over 15 years the average and median savings rate (when you combine employee and employer contributions) is around 10%. This is great. I hope it inches up over time but a double-digit savings rate in your workplace retirement plan is a great starting point for most people.

It would be nice to see this one at closer to 100% but the fact that the majority of people who have a retirement savings option at work are taking advantage is a good sign: 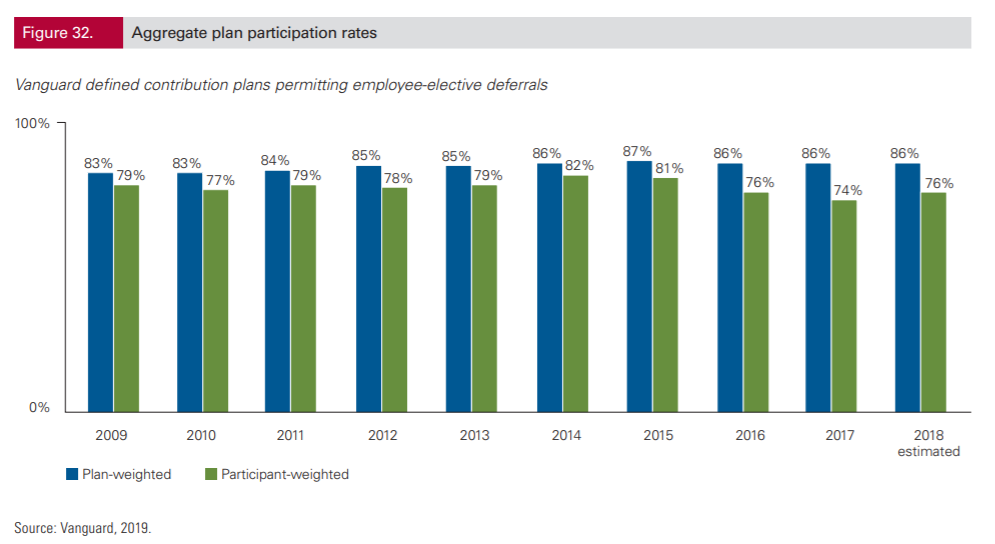 Vanguard also says 13% of those taking part in their defined contribution plans are maxing out their 401k: 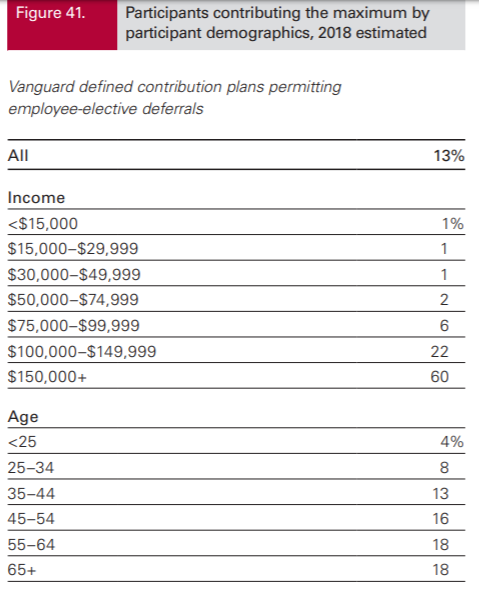 The majority of these savers are older and earn a higher income but there are still some young people and those with a lower income who are super savers.

They also broke out asset allocations by age in this beautiful chart comparing holdings in stocks in 2004 versus 2018: 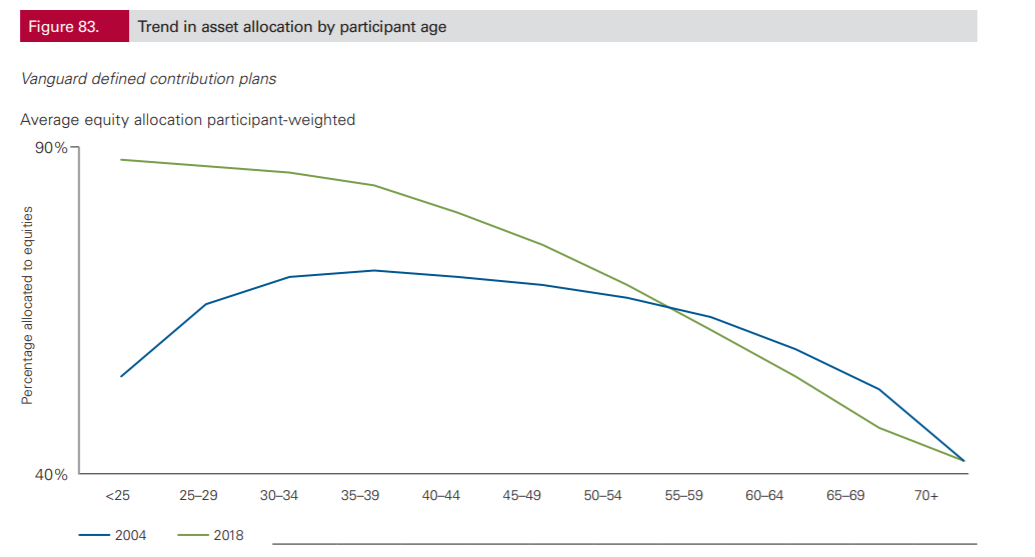 Young people have definitely become more comfortable holding stocks in their portfolio. I think this has more to do with the proliferation of target date funds than anything but it’s an obvious change in strategy.

The news isn’t all good in this report. The median balance is just $22k and change, meaning the average balance is skewed higher by those at the higher end of the savings scale.

Maybe I’m reaching here but it seems like things are at least improving, especially when it comes to plan design.

We can build on this.