Interest rates continue to fall across the board: 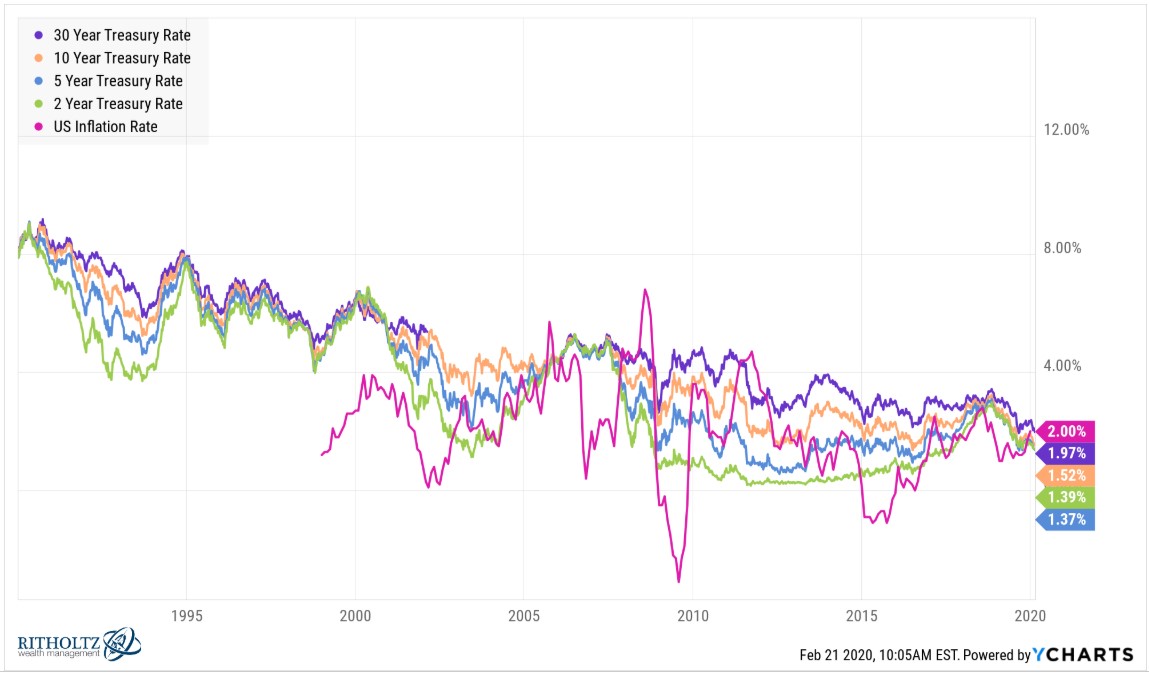 It’s wild that the U.S. government can now borrow money at just under 2% over the next 30 years. As you can see from this chart, interest rates don’t always rise and fall at the same magnitude but the trend lower in rates means other rates have fallen as well. 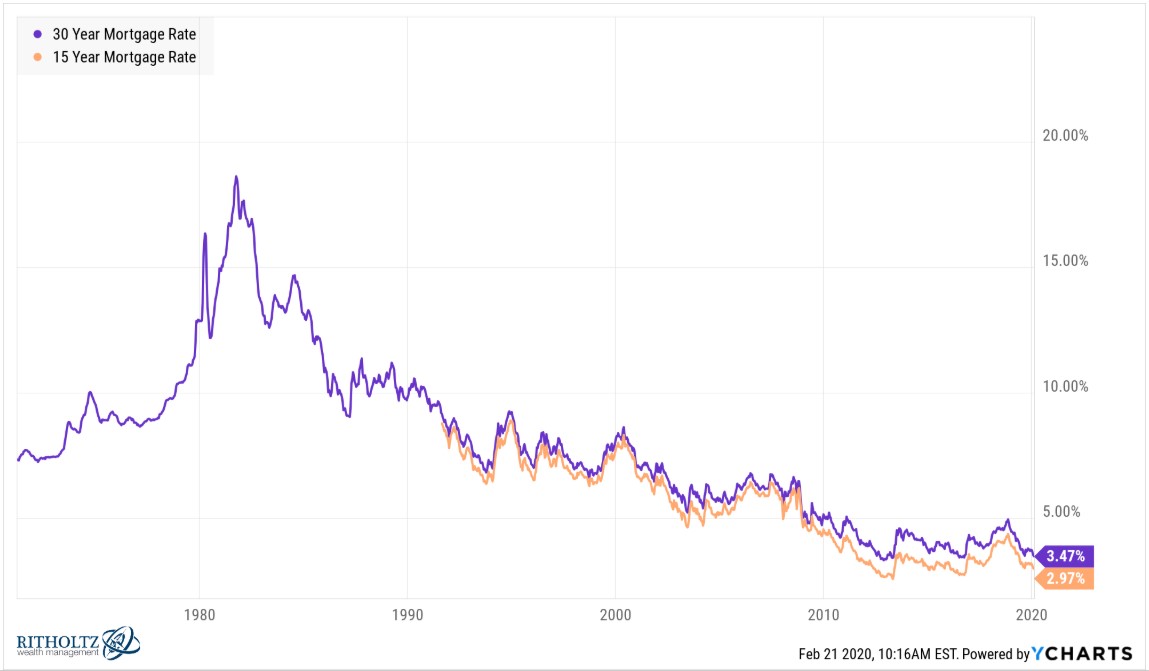 In the treasury yield chart above I included the inflation over the past 12 months which was 2%. Over the past 20 years, the average annual inflation rate was roughly 2.2%. When you consider the tax breaks on interest expense (not as great as they once were but still), on a real basis, you’re more or less borrowing for free with rates hovering around 3%.

It wasn’t that long ago when mortgage rates on both were above 6% (still there towards the end of 2008).

And throughout the 1980s, people were paying double-digit rates on mortgage, with averages reaching as high as nearly 19% in 1981.

So 3% and change today is minuscule by comparison.

The cost savings of refinancing when you go from 8% to 6% to 3.5% can be a huge boost to your monthly budget. Here’s a look at the monthly payments for a $350,000 loan based on a 30-year fixed-rate mortgage at various rate levels:

I’m sure no one has been hanging onto mortgage rates that high since there has been ample opportunity to refinance as rates have fallen but this offers some perspective on how helpful lower rates can be for borrowers.1

The fact that 15-year fixed-rates are so low creates additional considerations when making this decision. On this week’s podcast Michael and I discussed the appeal of refinancing to a 15 year fixed rate and the potential drawbacks:

Opportunity cost. Let’s assume Michael is refinancing a $500,000 mortgage. And let’s further assume his interest rate is going from 4.5% on a 30 year fixed to 3% on a 15 year fixed (even though he claims two and seven-eighths in the video). Here’s the tale of the tape2:

Monthly payments jump by $920 but you end up saving more than $290,000 in interest expense over the life of the loan. That’s real money.

BUT what if instead of paying down his mortgage, Michael took that $920/month and invested it in the stock market?

Behavioral cost. The problem with this opportunity cost analysis, other than the fact that 6% annual returns year-in and year-out aren’t realistic, is the element of forced savings involved. I asked Michael if he would be saving the difference had he not decided to make this switch.

His honest response was no.

It’s easy to make these types of comparisons but there’s a difference between running some numbers on a spreadsheet and then actually going out and doing what they say. If everyone simply invested the money they saved by not buying lunch or lattes or nice cars or Netflix they could turn those savings into something real assuming they allowed it to compound over 30-40 years in the stock market.

But most people don’t live in the spreadsheet.

They live in the real world and that means cost savings in one area typically involve spending in another area. Normal people aren’t hardwired to look at every spending decision in terms of “buy it now” or “save it for 30 years down the road.” Nor should they. No one has that kind of willpower and if they did, they would figure out a much easier way to save money rather than micromanaging every single purchase.

Most people need an automated or forced savings program to keep them honest (and there’s nothing wrong with that).

Assuming he put that additional $920/month into a new 3.5% 30-year fixed-rate mortgage, the loan would be paid off in roughly 17 years and change with a total of $170,000 in interest payments. That’s a couple of years longer than with some additional interest expense paid versus a lower rate 15-year mortgage but it gets you pretty close.

And it offers additional flexibility in case you needed to use that extra money down the line for something else.

Emotional cost. I talked in the video about the idea that maybe young people should take on more debt. I don’t actually think this for 95% of the population, but in a perfect world, borrowing at real interest rates which are effectively 0% at the moment should make sense over the long-term.

Yet this idea ignores the emotional impact of having a mortgage hanging over your head. Michael is right — 30 years is an almost unfathomable amount of time for most people. In fact, it’s one of the reasons young people have such a hard time wrapping their heads around the idea of compound interest and saving for retirement. Future you in 30 years is a distant relative.

Fifteen years is more reasonable. I know in 15 years my daughter will be in college and her twin brother and sister will be turning 18 and getting ready to make that leap as well.

The idea of having my house paid off when they go to college is appealing. Michael is in a similar boat with his two little ones.

Some people can live their financial lives in the spreadsheet and make their decisions based exclusively on the numbers.

But most people need to take their emotions into account when making these types of decisions. For some, the repayment of debt outweighs the potential opportunity costs of investing that money in the stock market.

A friend once told me, “No one ever regretted paying off their mortgage early.”

My head says now would be a decent time for young people to intelligently take on debt.

But my heart says paying off that debt early will likely lead to less financial stress in your life.

Further Reading:
The Cost of Selling Your Home

1I’m ignoring the fact that home prices have risen as well. Read here for more thoughts and data on this.

2It’s easy to run these numbers using any mortgage calculator. I prefer the Loan Amortization template on Excel.