Amazon is the poster child for the old trope of “If you would have put $10,000 into [insert wildly successful stock] at [insert opportune time in the past] you would have [insert insane amount of money].”1

Venture capitalist Bill Gurley was on Masters in Business with Barry last week and talked about why it’s so hard to pull off a long-term holding in a company like Amazon:

GURLEY: The power of compounding for some of these platforms is so, so huge that, you know, if you invest in an Amazon or whatever, the hardest thing to possibly do is just close your eyes and forget it.

And the only thing analysis that’s going to cause you to do is sell the stock. You know, you — you’re not going to run analysis, you know, for the fourteenth time and go, hmmm, I should keep holding like that. And that is so hard, so, so hard to implement — easy to say, very hard to implement.

Basically, you can’t overthink these things. But overthinking is what we humans do.

The reason it’s easy to overthink these things is because the ride can be so rocky: 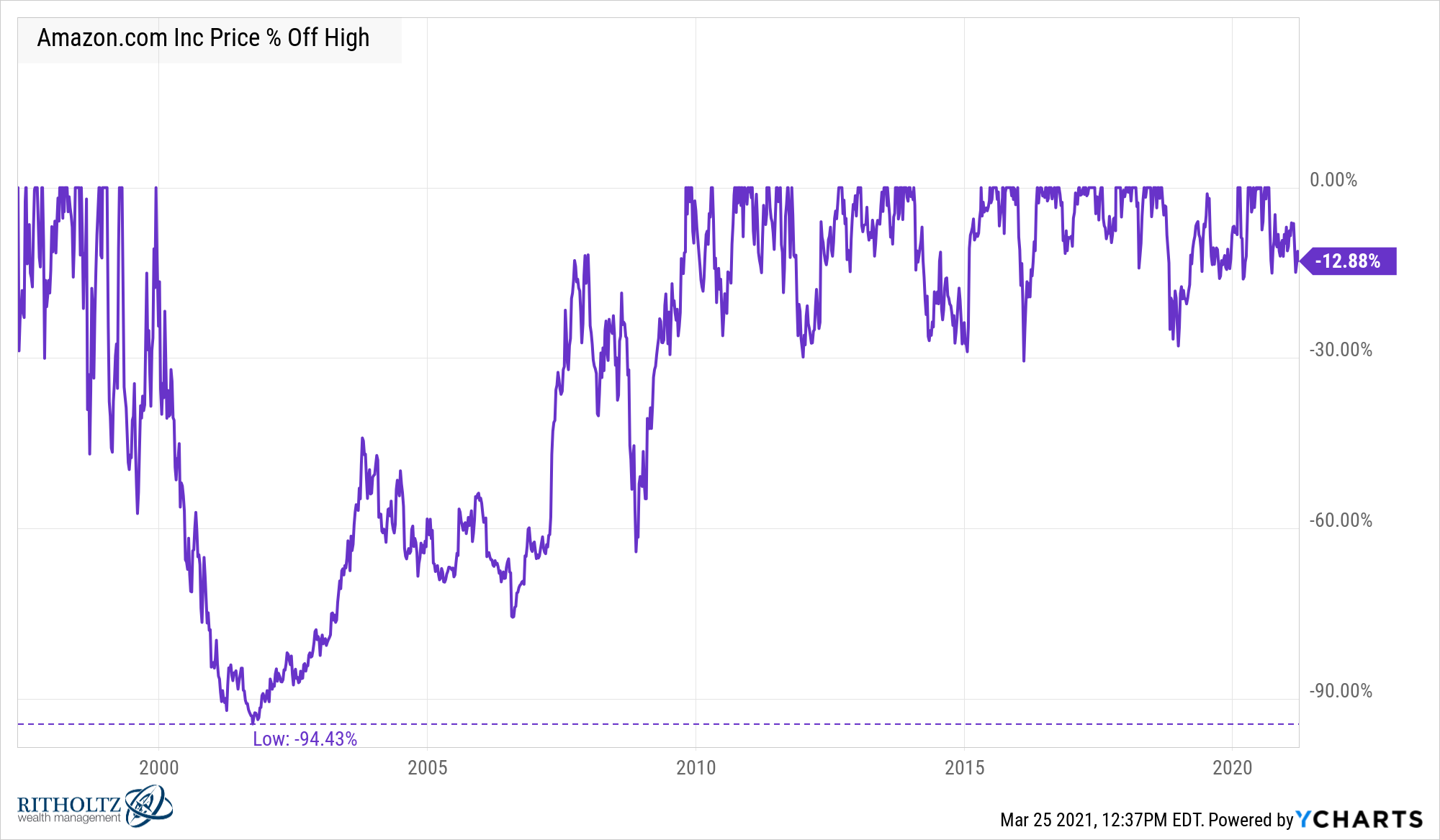 The near-95% crash following the tech bust is the one most people point to. The stock was underwater from 1999 to 2009!

The problem with such regular bone-crushing losses is you never know if your stock is going to come back or not.

Since 1980, more than 40% of all companies in the U.S. stock market have experienced a decline of 70% or worse without recovering.

And those enormous declines aren’t just for the companies that don’t come back from the dead.

Microsoft is another good example: 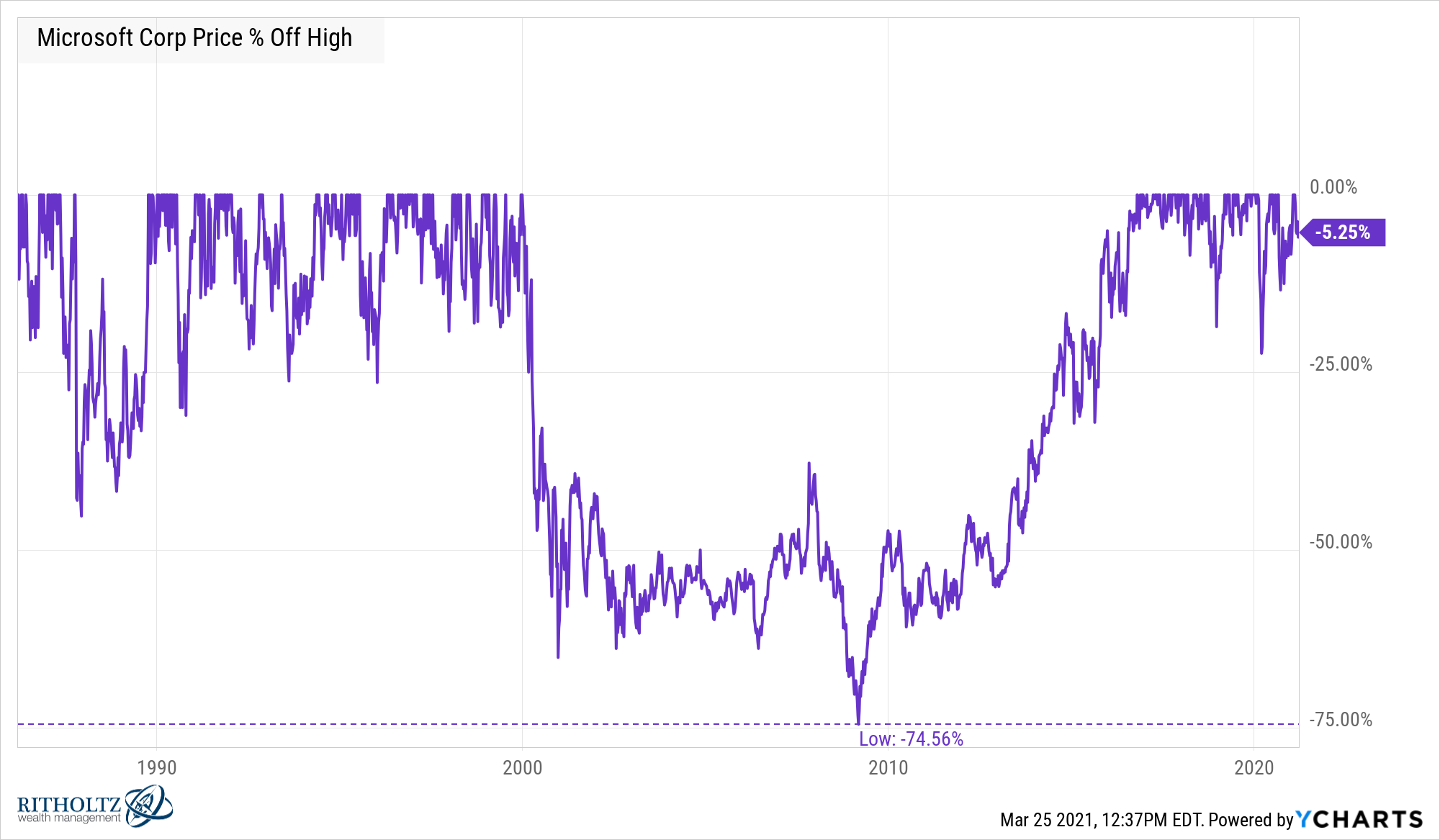 The stock fell nearly 75% following the dot-com debacle and it took 17 years for the price to make it back to the levels of late-1999. Microsoft also fell 56% in the 2008 crash and has experienced six double-digit corrections since 2009 (including three drawdowns of 20% or worse).

Monster Beverage is one of the best-performing stocks of the past few decades no one has heard of. The stock is up 125,000% since the turn of the century. Apparently, people really like energy drinks.

Look at the drawdowns the stock has experienced to earn those ridiculous returns: 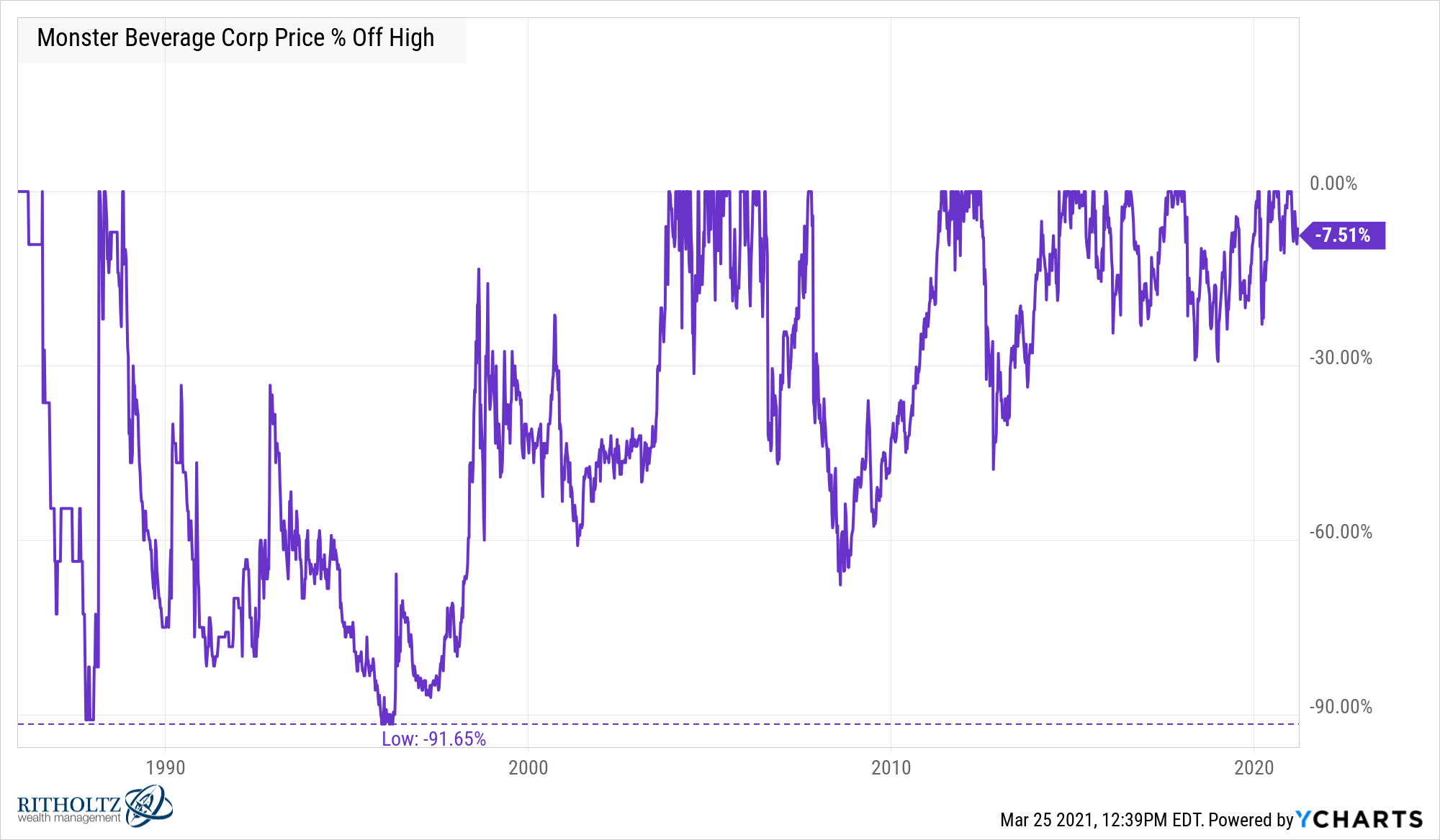 Tesla is another stock that has seen unbelievable growth in its share price while also exhibiting painful losses on its journey to becoming one of the best-performing stocks of the past 10 years or so: 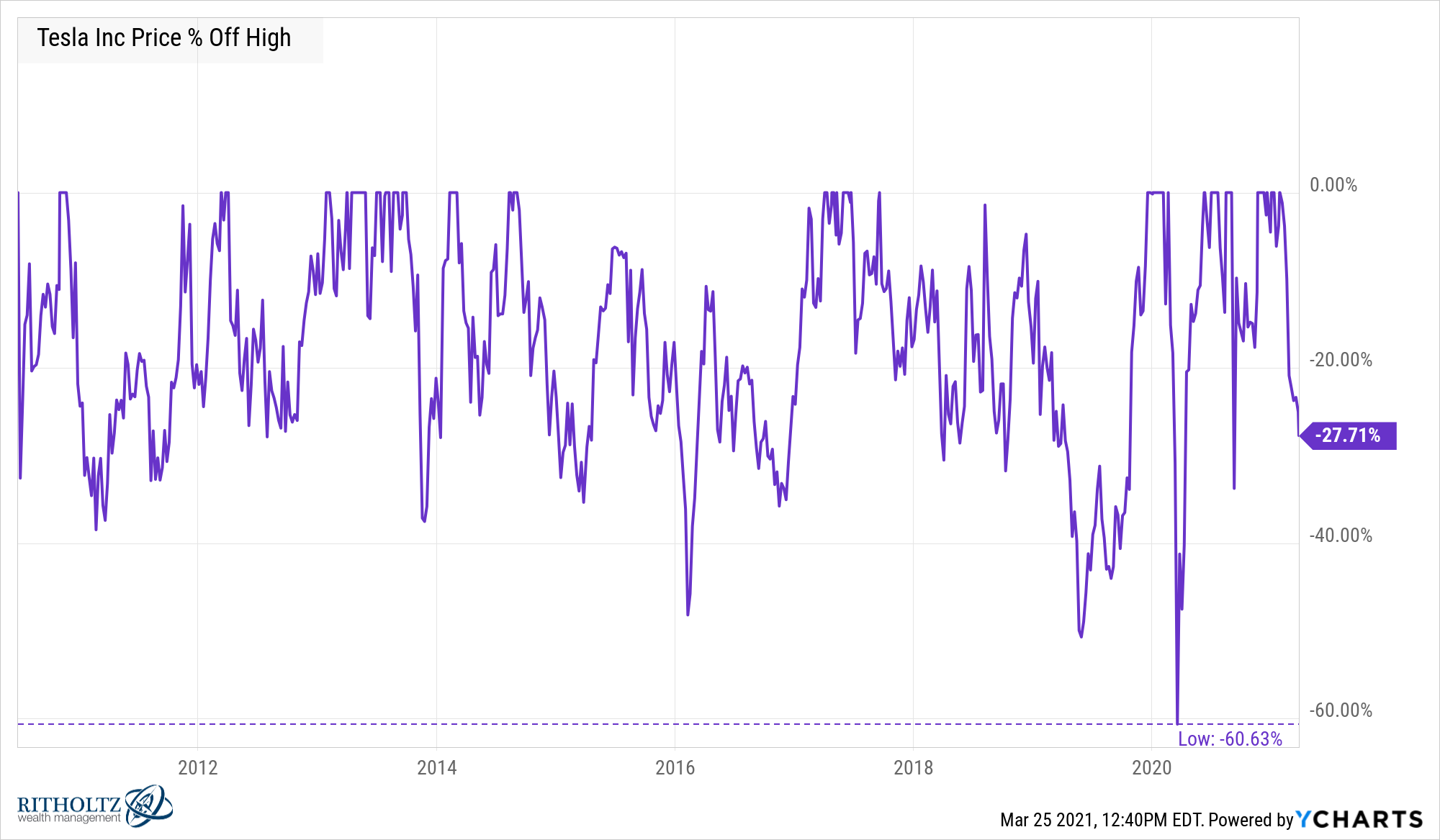 Tesla was up more than 730% in 2020 alone. But it also had its worst drawdown since becoming a public company, falling more than 60% during the Corona Crash. I counted 10 bear markets for the stock since its IPO and 3 of those bears were crashes of 40% or worse.

Or how about Netflix: 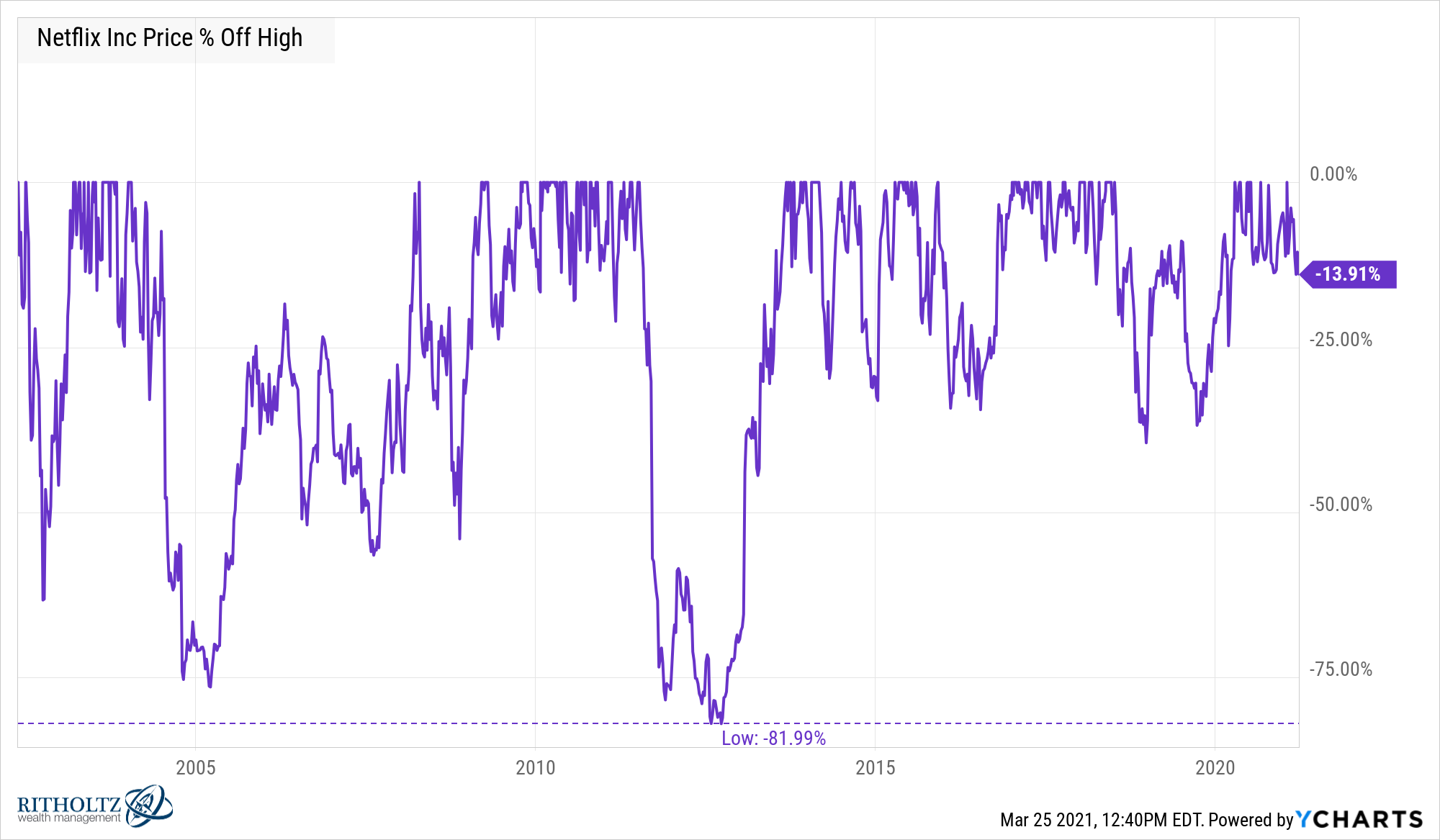 In 2012, you could have bought the greatest streaming company of all-time for an 82% discount. And there have been 4 losses in excess of 25% since it became the streaming juggernaut we know it as today.

When you look back at the returns of stocks like this it’s easy to think to yourself I knew I should have owned that stock.

But drawdowns are always far easier to deal with in the past than in the present. You know the length and duration of past losses. When stocks are down in the present you never know how bad the losses will get or if/when they will come back from those losses.

This was an $8 billion market cap company going into 2020. By early January 2021, it was close to $50 billion. Then out of nowhere, many of the pandemic darlings got shellacked. Pelton fell nearly 40% and is now closer to $30 billion.

I could see Peloton growing into the biggest fitness brand in the world. I personally love the experience.

Or they could be a niche/fad company that never reaches the heights of other growth companies. I wouldn’t be surprised by either outcome.

This is what makes picking these winners so difficult. It’s a constant tug of war between expectations and possibilities.

I could come up with a plausible scenario that many of the growth stocks that went vertical during the pandemic were massively overpriced and can’t possibly live up to the nosebleed valuations they were given.

I could also come up with a plausible scenario that a handful of these stocks are going to be much higher someday and every time they fall 20%, 30%, 40%, 50% or more it presents an unbelieveable buying opportunity.

I’m no good at predicting these things, but if I had to guess, the two companies that have the best chance of becoming as big as Amazon or Microsoft, or at least hitting market caps a level below these behemoths, would be Shopify and Airbnb.

Each company is currently sporting a market cap in the low one-hundred billions.

So they’re already large but what if they could someday hit $800 billion, $900 billion or even $1 trillion in market cap?

There would still be plenty of growth ahead.

Whether Shopify or Airbnb grow to these heights or not, the stocks will likely get crushed along the way. You have to plan on seeing your money evaporate in stocks like this every few years.

A number of people think Shopify could become a threat to Amazon at some point. In some ways, maybe it already is. Look at the company’s drawdown profile since going public in 2015: 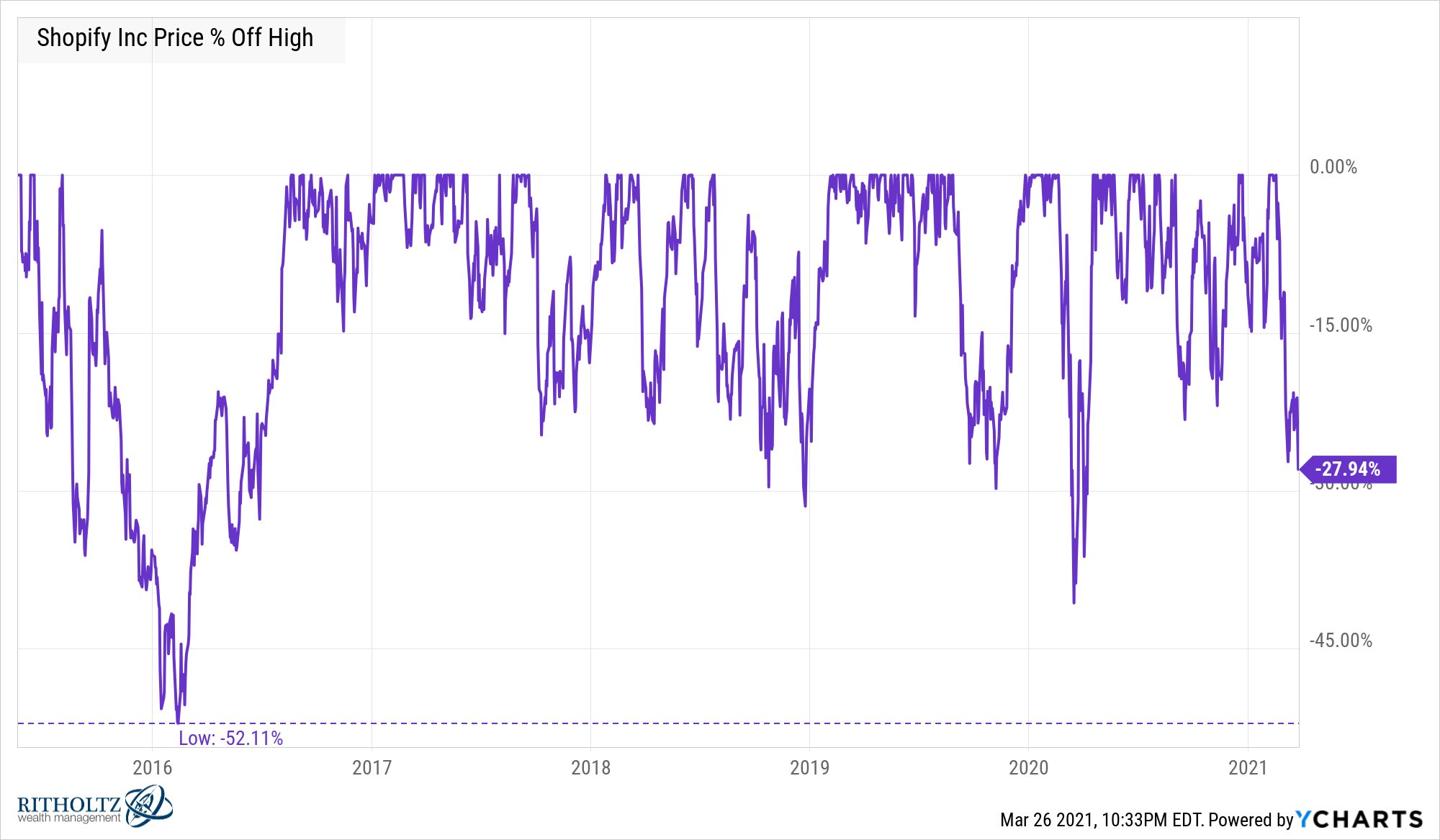 I spot a 50%+ crash in the early days of being public along with four other instances of crashes of around 30% or worse.

This includes the current 28% losses which have occurred while the S&P 500 and Dow continue to hit new all-time highs.

The stock market is constantly switching back and forth between making people feel like a genius or an idiot depending on its mood.

Growth stocks do the same thing but even more often.

Picking the winners is hard. Holding onto them might be even harder.

1In case you were wondering, $10k invested at Amazon’s IPO in 1997 would be worth over $15 million today. Feel bad about yourself yet?