It’s now been more than seven years since the official end of the last recession. In that time investors have been inundated with double dip recession calls, tales of increased uncertainty and warnings of higher volatility. Everyone was so shell-shocked by the Great Recession that it became easy to assume that catastrophe and economic upheaval were here to stay. Instead, we’ve actually had a relatively calm economic environment for some time now.

I looked back at real GDP growth rates going back to 1946 and then ran a simple rolling standard deviation on the past five years’ worth of data to see how volatile the growth has been over time (recessions shaded in gray): 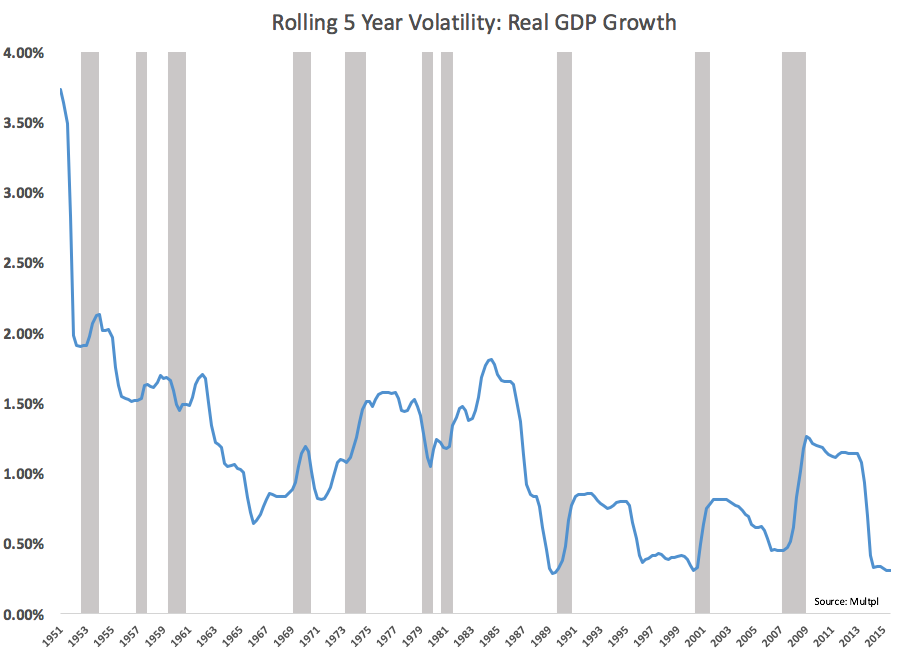 You can see that the past five years have been one of the least volatile on record going back to WWII. It’s kind of amazing how consistent growth has been over this time frame (with the caveat that recent economic data can still get revised higher or lower in the future). The biggest problem is that although growth has been consistent, it has also been relatively anemic. And one of the reasons that growth was more volatile in the past is because there was more of it. The following table on real GDP growth by decade shows how things have slowed over time: 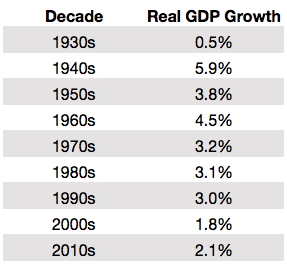 One of the reasons it’s been so tough for experts and pundits alike to get a read on the economic backdrop is because the volatility has been so low. Things just haven’t gotten too hot or too cold in this recovery so economic bulls and bears have both had plenty of chances to be wrong. Everyone expects there to be a huge move one way or the other and it just hasn’t happened yet. Another problem is that people tend to confuse stock market volatility with economic volatility, which aren’t even in the same ballpark: 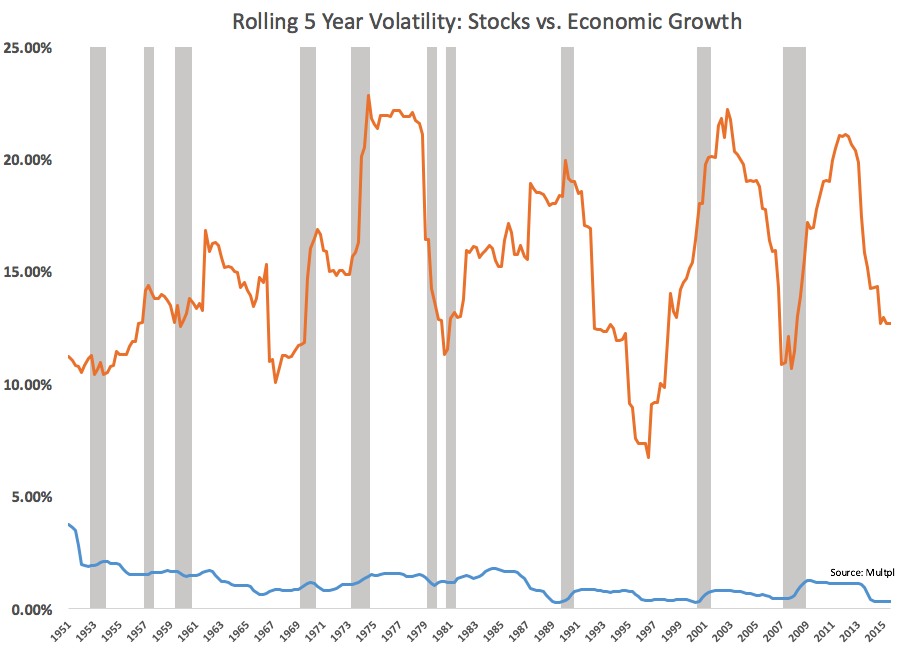 From 1946-2016 stock market volatility was nearly ten times higher than the volatility of economic growth (roughly 1.5% to 15.5%). It’s been said many times before, but stocks are not the economy. Yet even the stock market has seen its relative volatility fall in recent years even though many would have you believe otherwise.

This economic recovery has been uneven as not everyone has benefitted in the same capacity. Still, in some ways it’s hard to believe where we’re at considering how bleak things looked at the depths of the GFC. These things won’t last forever, but it’s worth noting where we are today more than seven years after one of the worst economic collapses of the past 100 years:

Investors are fond of reminding people that “this will end badly.” And it’s true that markets and economies cannot grow forever without a pause, correction, recession or crash. But I think many people fail to recognize how smooth this recovery has been.

Further Reading:
Did We Just Witness the Best Risk-Adjusted Returns Ever?
When Will the U.S. Have Its Next Recession?