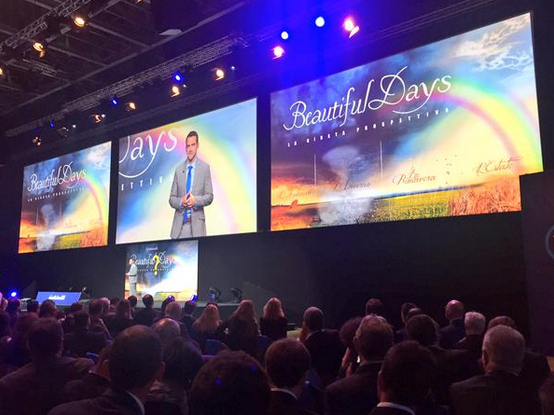 I spent the earlier part of this week in Milan and Rome speaking to a large group of financial advisors for Banca Mediolanum, a large bank in Italy. It was a great experience, and not just because it gave me the opportunity to travel throughout Italy. I also came away with some interesting takeaways on the financial advising business in Europe.

Italy, like many European countries, is very new to the idea of employing a financial advisor, as only 10% or so of the population currently works with one. In the past, Italians have used a combination of real estate holdings, government bonds and pensions for investment and retirement purposes. Stocks, let alone a well diversified portfolio of different asset classes, have never been of much interest to their investors. They were happy to earn 5-6% on Italian government bond yields, pass along real estate to their heirs and bank on pension income to supplement any shortfall.

Over the past decade many people have finally come around to the realization that real estate isn’t a perfect asset class. Economic and demographic issues will likely mean changes to a generous pension system. And interest rates in the 1-2% range aren’t going to be able to pick up the slack from bond holdings.

Italians are slowly coming to the realization that they need to start diversifying their assets and seeking advice from a financial professional. What was interesting to me is that the financial crisis from 2007-09 didn’t really leave much of an impression on their investors because the average Italian has something like 10% of their assets in the stock market. Even the Eurozone crisis that saw volatility spike in 2010 and 2011 didn’t have much of an impact (those times were more about economic worries).

The volatility seen in stocks this year is really one of the first times many of their newer clients have been exposed to market fluctuations. Not only is it new for the clients, but it’s also new for the advisors from the perspective of how to effectively communicate and help their clients through these tough periods. It’s uncharted territory for both parties.

The day before my speech I had to work with a translator to make sure my talk would translate into Italian. My goal has always been to explain complex topics in a way that’s easy to understand for a wide audience, but this translation was harder than I would have expected. It took a number of hours to go through line by line to make sure they were comfortable with how everything would come out in Italian.

I had to very literally go through every single point in my speech. Not everything translated perfectly and tons of changes needed to be made. This forced me to really break things down word by word to ensure that everything made sense and there were no misunderstandings.

It was a helpful way to keep my message simple, clear and on point. But it was actually quite difficult to give this speech because many of my original analogies wouldn’t work. I couldn’t use any jokes or sarcasm because they wouldn’t have the desired effect. You really start to re-think how to say something when it has to be so straightforward and to the point.

(As an aside, the language barrier was actually helpful for me in terms of public speaking. I’ve given speeches in the past, but nothing of this size. There were a few thousand people at each event. The fact that I knew the majority of the crowd would be mostly listening to the translator actually helped make it easier to give these speeches. So maybe a good way to get over public speaking fears is to pretend that the audience speaks another language altogether. Another one I heard recently is to pretend everyone is on their smartphone — because they probably are anyways, but I digress).

Even though there were some hurdles with the language barrier, there was one constant that they really wanted me to focus on — it turns out behavior is the universal language. They all understood that the biggest challenges facing this relatively new venture weren’t necessarily portfolio management or financial planning-related issues; it was effectively communicating with their clients during periods of volatility. They’re trying to learn how to be behavioral counselors to their clients.

I wished them luck in their quest for better client education and communication, but I know they face an uphill battle. Behavioral finance has been around for a few decades and it’s just started to receive the attention it deserves in that last decade or so in the U.S. My experience is that the behavioral side of things has a steep learning curve and takes some experience and hand-holding to get people on board.

The reason for this, as I said in both of my speeches, is that knowledge alone is not enough to change bad behavior. People not only have to want to change, but they have to have systems in place to make it possible. It sounds so simple, but it can be very hard to pull off under real word situations.

Further Reading:
The Need For More Effective Communication in the Investment Business