Last year the stock market gave us a Jimmy Stewart-esque moment. On Christmas Eve the S&P 500 fell 2.7%, pushing the peak-to-trough drawdown from the late-September market highs to -19.8%.

Things looked bleak. Recession talk was heating up, the government began a shutdown, and it felt like the selling would never stop. But it did that very day. It was a Christmas miracle. Stocks were up nearly 5% the day after Christmas and never looked back.

The S&P is up nearly 40% since the close on Christmas Eve 2018, recouping those losses by spring.

It’s always much easier to look back after the fact than it is during these types of drawdowns. Every correction is a wonderful buying opportunity in hindsight but in the moment it feels like the pain will never end.

So I wanted to re-run this post (with some updated numbers) where I looked at what Michael and I said in the midst of the selling. We even called our episode The Bear Market. This doesn’t mean the next mini-bear market will be exactly like this but it can be helpful to remember what it felt like during a drawdown rather than after the fact.

Enjoy and have a Merry Christmas and Happy

We recorded an episode of Animal Spirits called The Bear Market on December 21, 2018 (it aired on December 26). The first 10 minutes or so of the podcast provides a look back into the psychology in the midst of a decent-sized downturn in the stock market.1

We talked about the damage that was inflicted up to that point along with how improbable it felt to even think about new all-time highs in stocks from those levels:

The day after Christmas, stocks rose 5% and never looked back, rocketing to new all-time highs last week. Since 2013, there have now been 239 new all-time highs (and counting) in the S&P 500, more than one out of every eight days that the market was open in that time.

New all-time highs during the depths of the correction felt silly to talk about. That’s what markets do — make you feel silly from time to time.

The S&P is up nearly 40% from the Christmas Eve massacre: 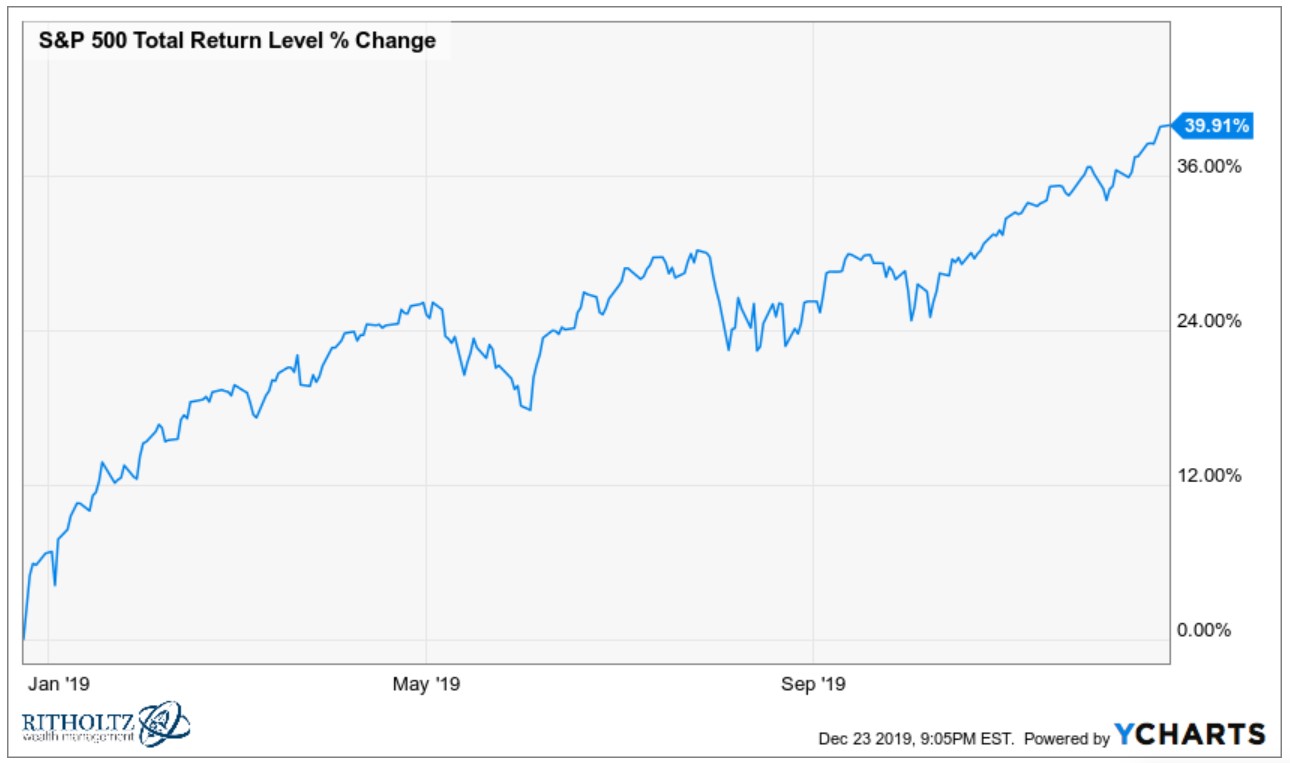 There was also lots of recession talk as stocks were getting crushed:

Everyone has heard that old quote that the stock market has predicted 9 out of the last 5 recessions. But every time stocks get hammered those recessionary thoughts invariably creep in. How could they not?

When stocks fall a little it always feels like they can fall a lot. That’s because no one ever knows what fear will lead people to do in the markets in a downturn. The 1987 crash saw stocks fall 33% or so within a week. There was no recession but there was plenty of panic involved.

This was us questioning at the time whether this was a short-term blip or a longer-term panic:

There was no way for us to know stocks would bottom just a few short days later.

When the market fell in 1966 some of Warren Buffett’s investors in his partnership called to warn him stocks would likely have further to fall. Buffett responded with two questions:

(1) if they knew in February that the Dow was going to 865 in May, why didn’t they let me in on it then; and (2) if they didn’t know what was going to happen during the ensuing three months back in February, how do they know in May?

The truth is no one knows what’s going to happen, especially over the short-term, which is why it’s so difficult to time the market. However, when you’ve been waiting to deploy money in the markets there are far worse times to do so than during a big decline:

December sure feels like a great buying opportunity now that we can look back on the outcome but it didn’t feel like it to many people at the time. Stocks could have kept right on falling, making any purchases at the time feel like they would have been ill-advised.

That’s why you don’t overthink these things. When stocks are down and you have many decades of investing ahead of you, buying is almost always going to be a good decision.

If you’re saving on a regular basis you want to buy in at lower prices because it allows you to earn higher dividend yields and higher expected returns.

Further Reading:
What a Strange Round Trip It’s Been

Subscribe to the podcast and write us a review if you are so inclined:
Animal Spirits

1If I was a bit more dramatic I would have called this the eye of the storm but, credit to me, I resisted. This was a run-of-the-mill correction.