I put the following thoughts out on Twitter last Friday following the release of the employment numbers:

You would've been laughed out of any room in the country if you predicted in 2008 that we'd now have:

I was a little shocked at the enormous number of replies that read something like this:

I knew there was a strong anti-Fed contingent out there but I didn’t realize how strong it truly was. In some ways I get it because the Fed did miss a lot of warning signs in the lead up to the financial crisis. And their response to the crisis left a lot to be desired from the perspective of the average investor or homeowner.

I can understand why these things cause a lot of anger about where we are in the market cycle. A lot of people have missed the boat on this stock market rally.

But much of this sentiment that it was so obvious that markets would rally strictly because of central bank “manipulation” is a clear misrepresentation of the past.

People have been warning that the Fed is running out of ammo for years now: 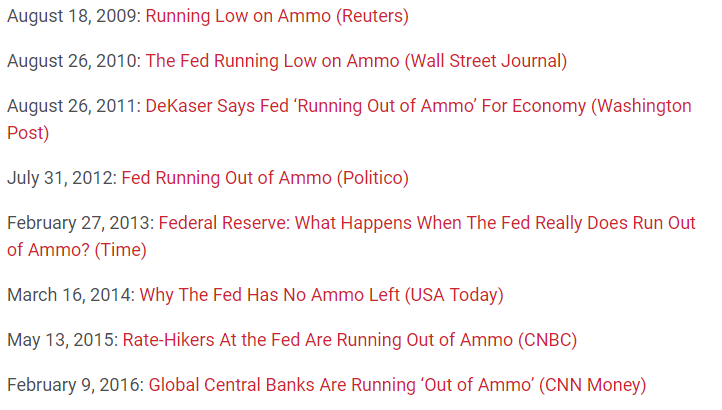 The Fed has also been pushing on a string…

…will surely cause a bout of hyperinflation:

…which could be our Zimbabwe moment:

…has completely rigged the stock market:

…and mastered the art of market manipulation:

We’ve also been told over the years how behind the eight ball they are, how they needed to raise rates sooner, or not raise rates so quickly, or how the end of QE would certainly lead to a crash and this list could go on. None of these predictions have been accurate.

The Fed is far from perfect and there will surely be unintended consequences from their actions but if the biggest critics of the Fed make it seem like a foregone conclusion that monetary policy in the form of “money printing” would lead to “asset price inflation” then why have they been sitting in cash or gold the entire time? Why didn’t they take part in the manipulated market if it had nowhere to go but up?

This is a case of moving the goalposts because none of this was a foregone conclusion. Most people don’t really understand how monetary policy actually works so there have been a lot of misinterpretations about how the Fed’s actions would impact the markets.

And if the Fed is artificially inflating U.S. stocks, why haven’t stocks in Europe or Japan kept up? It’s not like they’ve been shy about using easy monetary policy.

There are no counterfactuals in these things so we don’t really know what would have happened to interest rates or stock prices or the global economy if central banks didn’t keep their foot on the gas pedal.

But does the alternative of higher yields, lower stock prices, higher unemployment, slower economic growth and smaller portfolio market values really sound like a more appealing place to be?

These things will all happen on their own at some point regardless of central bank activities because everything is cyclical but it’s also worth pointing out how the fundamentals have improved throughout this cycle. 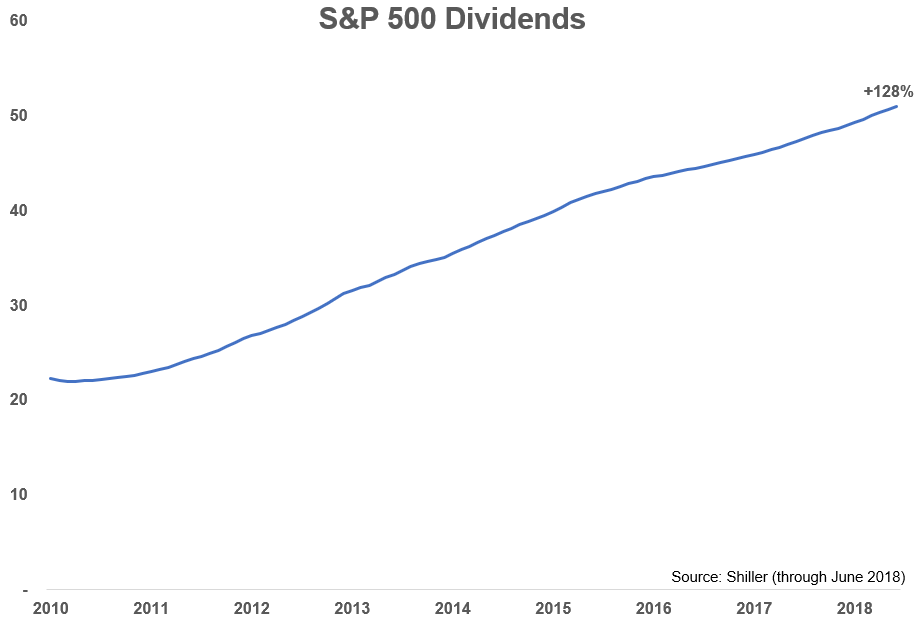 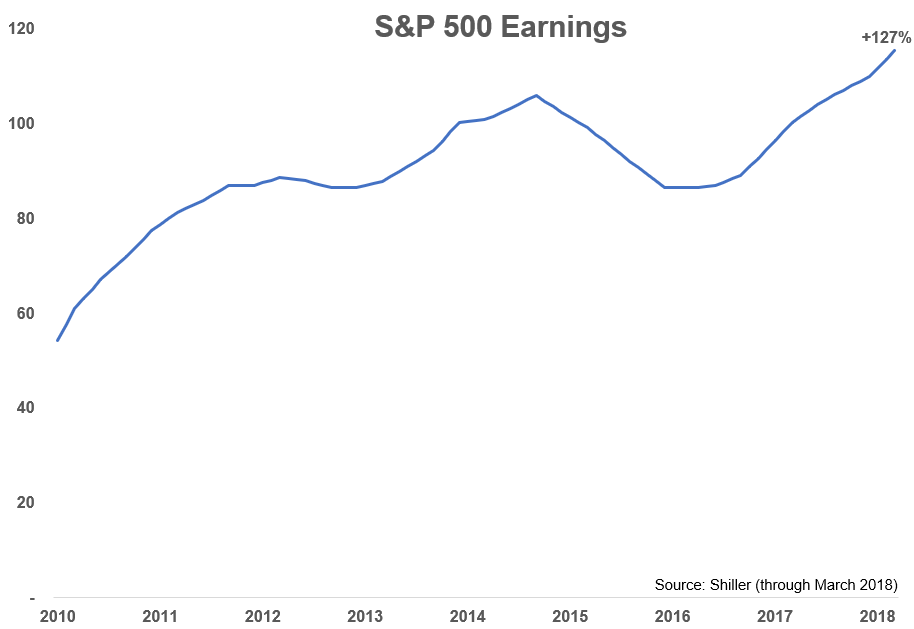 Households have deleveraged since the crisis (hat tip to Scott Grannis): 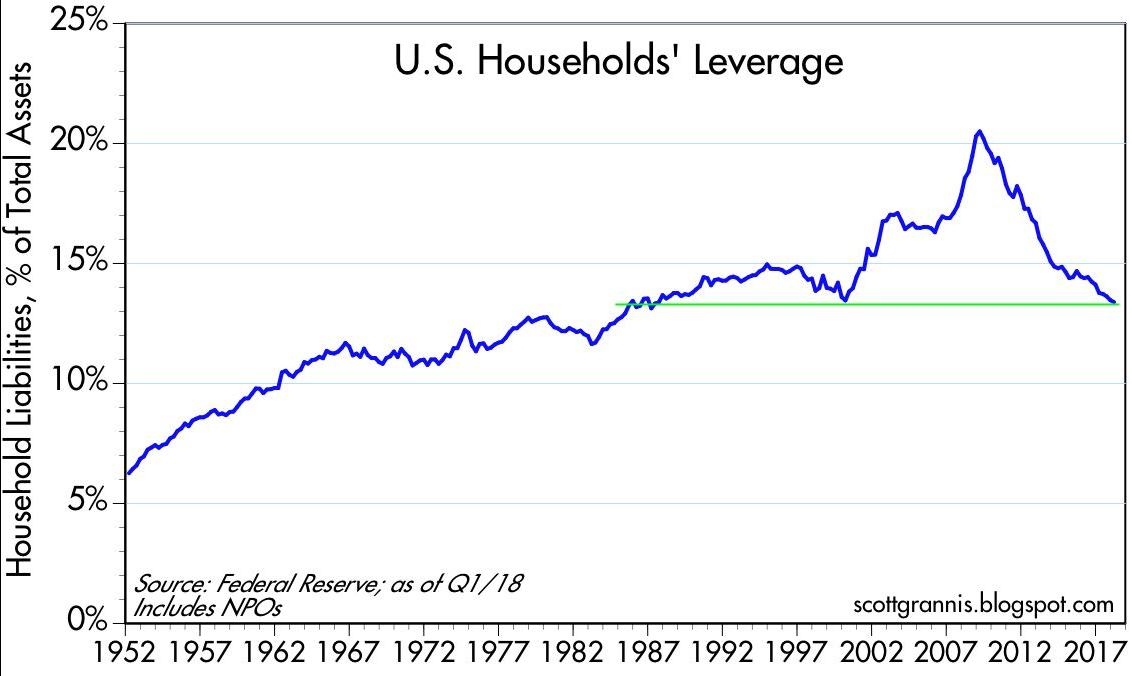 Household net worth is at an all-time high but doesn’t seem to have diverged much from the longer-term trend: 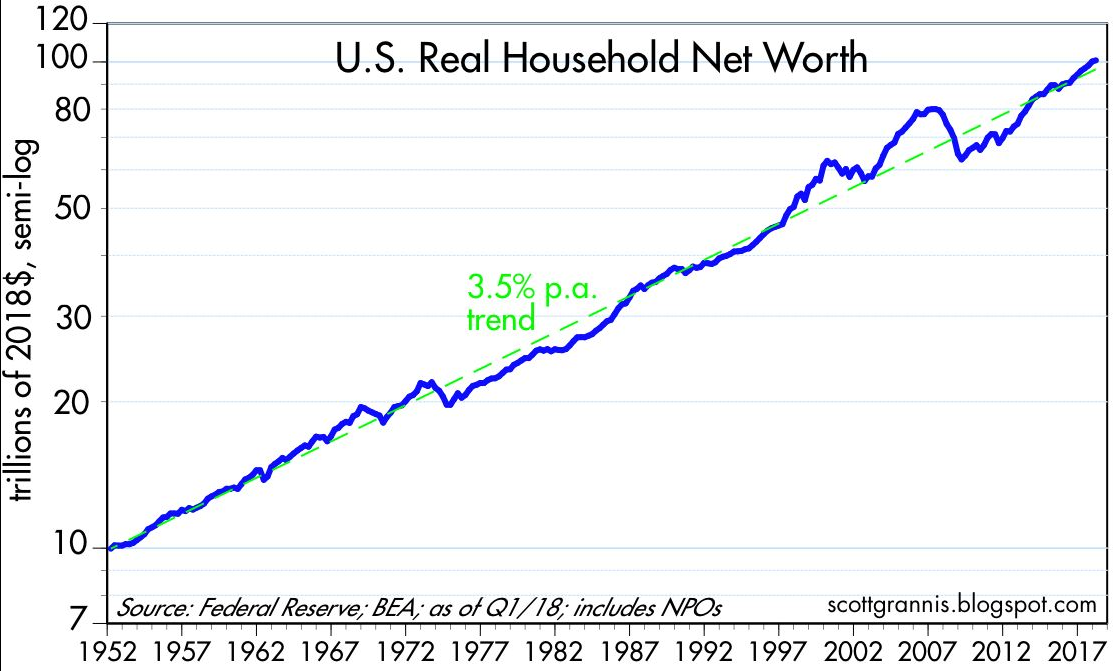 I could play this same game by providing worrisome charts and figures as well but my point here is that the fundamentals have more or less kept up with the stock market throughout this recovery.

Markets are far from perfect at the moment but there’s never a perfect environment. The crash will come someday and the people who have been complaining about rigged markets will feel vindicated.

They will take victory laps and hand out I-told-you-so’s to anyone who will listen.

But they also won’t help you get back in the market because there will always be another reason to stay out.

Pessimism will always make for a more compelling argument than optimism but central bank conspiracy theories won’t fund your retirement or other financial goals.

Following the financial crisis, most investors decided they needed to pay more attention to the macro side of things. For many investors that meant trying to handicap the Fed and make decisions based on their actions.

The problem with this approach is (a) most people don’t understand the mechanics of monetary policy and how it works in concert with the banking system, (b) while the Fed has certainly helped from a confidence standpoint they have less control over the markets than most assume and (c) becoming a macro tourist is far worse for the profitability of your portfolio than simply ignoring what’s going on with the Fed because you end up overreacting to things that don’t truly matter to your situation.

Further Reading:
When the Markets Defy the Fed