One of the worst parts about investing for those who go through years of school to learn about finance and economics is that the real world rarely plays out like the textbook theories say. The human element often invalidates studies or theories that take place in a vacuum. The following is a piece I wrote for Bloomberg about how the financial markets tend to defy Fed policy and interest rate norms.

Last week, Federal Reserve Chair Janet Yellen gave a strong hint that the central bank would be raising rates at the Open Market Committee meeting in mid-March. “We currently judge that it will be appropriate to gradually increase the federal funds rate if the economic data continue to come in about as we expect,” she said in a speech in Chicago.

Investors seem to believe that economic data is giving the Fed the green light based on the implied probabilities for a rate hike. 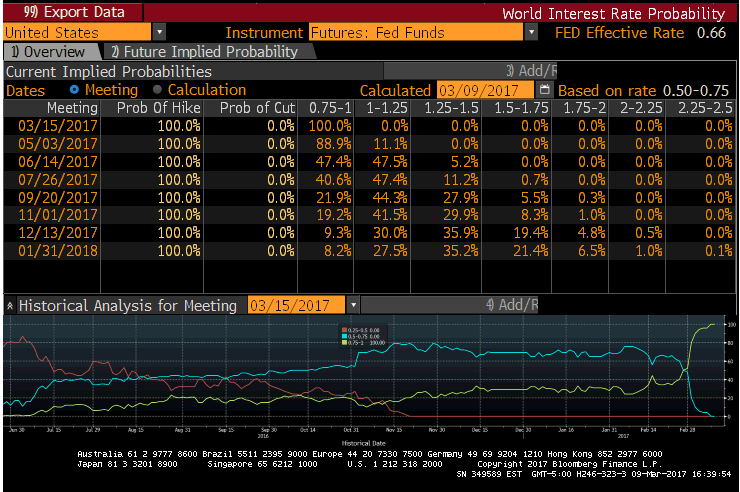 Last week, Federal Reserve Chair Janet Yellen gave a strong hint that the central bank would be raising rates at the Open Market Committee meeting in mid-March. “We currently judge that it will be appropriate to gradually increase the federal funds rate if the economic data continue to come in about as we expect,” she said in a speech in Chicago.

Investors seem to believe that economic data is giving the Fed the green light based on the implied probabilities for a rate hike.

Looking back at historical market scenarios can’t help predict the future, but it can allow you to think in terms of probabilities and what usually happens. So I looked back at historical fed rate hike cycles going back to the late 1950s to see how different assets performed. Here are the performance numbers for stocks, bonds and cash during the previous 14 rate hikes, along with the start of the most recent cycle: 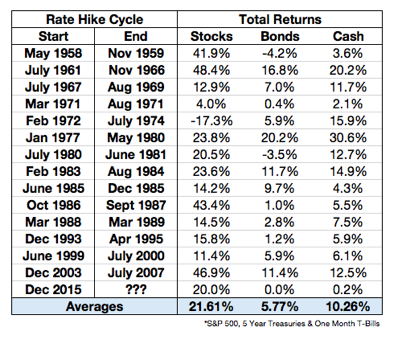 Although many investors have been worried about the Fed raising rates, stocks are up around 20 percent since the first hike in late 2015. The average length from the first interest rate increase until the last one was around two years and three months. Surprisingly, stocks only had a negative total return once over all of these rising fed fund rate environments. Bonds only experienced losses twice and short-term Treasuries did surprisingly well, much better than bonds.

No one knows how long the Fed will continue to raise rates, because the central bank is “data dependent,” but it can also be instructive for investors to see how these assets performed once the Fed was finished raising rates. Here are the one- and five-year returns for stocks, bonds and cash following the last rate hike in each of these instances: 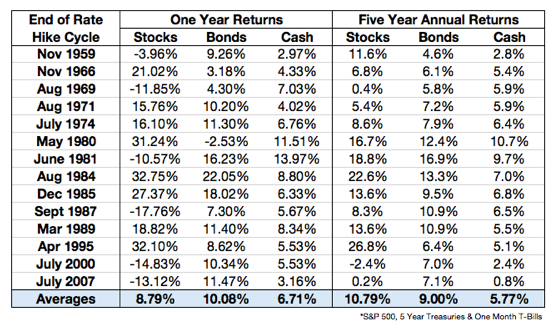 The average still looks pretty good for stocks after the Fed is done raising rates, but the win percentage is much lower. One year later, stocks were negative on six of the 14 previous rising rate cycles. They were only negative once in the five years after the bursting of the tech bubble. You can see that bonds performed much better once the rising rate environment had ended. That makes sense, considering investors would be receiving larger income payments from higher bond yields.

Although it would appear from a historical perspective that these main asset classes all performed admirably in rising rate environments, there are some caveats to consider.

Starting and ending interest rates were much higher during all of these prior periods as the historical fed funds rate shows:

These higher short-term rates are a big reason cash and bonds did so well during previous rate hikes. They had a much larger cushion in the form of higher starting yields. Rates are now going from historical lows to just higher than historical lows. We don’t have a historical comparison to make in terms of zero percent fed fund rates because it’s never happened before. It’s possible the Fed kept its foot on the gas pedal too long and left rates too low for too long.

Investors also have to understand that the reason for the rate hike itself will likely have a lot to do with how things play out. Are rates rising because the Fed believes:

So far, the stock market seems to believe that the rate hikes are coming from a good place. We’ll see if that continues to be the case if the Fed does gradually hike in the coming year.