It was a tough couple of days for star portfolio manager Bruce Berkowitz’s Fairholme Fund (FAIRX) last week. The fund lost nearly 10% on the week, with much of that loss coming on a single day. Over the past month it’s down more than 13% even though the S&P 500 is down less than 2%.

Granted, this is a very short time horizon to measure performance, but these are the kind of results you can expect with an extremely concentrated portfolio. This is the breakout of the top five holdings in the fund which accounts for more than three-quarters of the fund’s assets (via Morningstar): 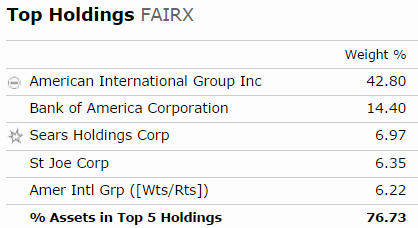 The top ten holdings make up around 92% of fund assets. You have to respect the guy’s conviction to put so much faith in so few names. You can’t call Berkowitz a closet-indexer like so many active mutual funds out there. But fund investors need to understand the risks of this type of concentration in holdings.

Performance can be erratic at times, to say the least.

Berkowitz was named Moringstar’s U.S. Stock Portfolio Manager of the decade in January of 2010 for his fund’s performance in the 2000s. Since then you can see how different the fund returns have been from the broader market:

This concentrated style of investing is actually the way Buffett ran his stock portfolio back in the day (he’s more diversified now). But Buffett was dealing mainly with long-term shareholders with a growing capital base from his insurance premiums and other business profits. Berkowitz is dealing with mutual fund inflows and outflows, not exactly a sticky investor base.

We’ll see what affect the latest losses have on investors, but they have actually behaved themselves over the past one and three year periods. It’s the five and ten year behavior gap between fund and investor returns that has made things even worse:

However, the longer-term track record for investors is much worse as almost half of the ten year fund return evaporates when you look at investor returns because of poor timing decisions on purchases and sales.

The stock market as a whole can be volatile, but it’s nothing like the volatility that can be seen in individual securities. The biggest risk for an investor in a fund like Fairholme is a lack of understanding in this concept.

To beat the market you have to be different than the market. Concentrated portfolios increase the range of outcomes in both directions. In the past this has led to outsized gains for Berkowitz. Lately, it’s gone the other direction.