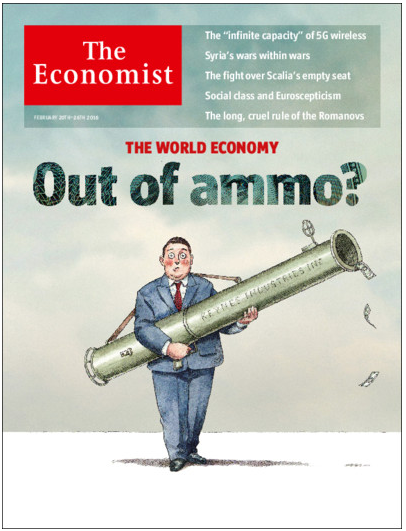 The latest cover story for the The Economist asks if central bankers are Out of Ammo? Anything is possible, especially when there’s talk of negative interest rates in the U.S. some day. But this is a question that has been asked many, many times over the years throughout this recovery:

February 27, 2013: Federal Reserve: What Happens When The Fed Really Does Run Out of Ammo? (Time)

Eventually one of these headlines will be correct, but in the markets many people are often right, except it’s for the wrong reasons.

I’ve always been of the opinion that the Fed has more to do with confidence (in the system, the markets, etc.) than anything. Most people — whether involved in the markets or not — don’t really seem to understand how monetary policy actually works, what its limitations are and how it affects the economy. It makes for interesting theater, but most investors are better off ignoring what the Fed does and focusing more on those things that they actually have control over.