In October I pondered what could send the price of bitcoin into the stratosphere.

My theory was that a flood of institutional capital could propel cryptocurrencies to the moon. The buy-in from the endowment, foundation, pension, family office space hasn’t quite happened just yet but bitcoin and the alt cryptos did see a huge ramp over the next couple of months.

I tend to look at these things from the angle of an asset allocator since that’s where I’ve spent my entire career but there is another angle to the institutionalization of this space, namely price discovery. While institutional asset allocators still haven’t warmed up to the idea of investing in crypto, the big change that happened in December was the rollout of futures trading.

It’s uncanny how the start of a futures market in this space coincided with the peak of the price following the holiday surge in November and December: 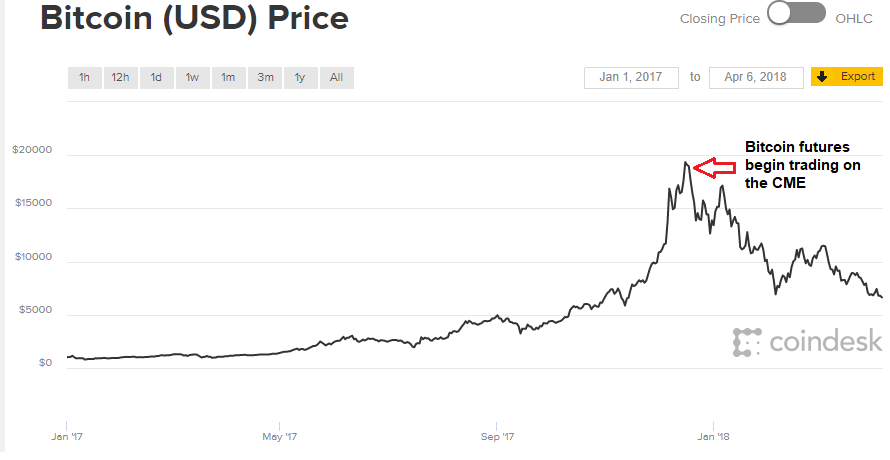 The CBOE offered futures contracts in mid-December which was followed roughly one week later with futures on the CME, the world’s largest futures exchange.

Of course, it could just be a coincidence that professionals were given the option of going both long and short using futures contracts at the height of the crypto insanity. Maybe these exchanges rushed these offerings to the table because the demand was so high for other ways to trade this stuff.

The prevailing wisdom at the time was that futures trading was going to be the catalyst for the next leg higher. But before futures were available there was no simple way for traders to short bitcoin.

Short sellers often get a bad rap but they play an integral role in the functioning of the markets. They help set prices. They call out fraud situations. They provide balance. Short sellers can be abusive at times but that’s true of many types of investors. Shorting is often a thankless job since most markets move higher the majority of the time.

I wouldn’t recommend short selling to ordinary investors because it’s probably the most difficult investment strategy there is but those professionals who focus on this style of investing do provide healthy market dynamics on the whole.

When bitcoin was going gangbusters a widely accepted narrative was there were no marginal sellers since the supply is constrained (and of course now that prices have crashed the prevailing wisdom is that prices won’t get back to their previous peak until the tech is more widely adopted — narrative follows price, as always). I never bought the constrained supply idea since there are thousands of other cryptocurrencies but the addition of futures to this market means that there are marginal short sellers who can take the other side.

I’m not placing all of the blame in the fall of bitcoin on futures traders. Obviously, futures can be used for going long bitcoin as well and it’s never that simple with these things, especially with a market like this which was driven exclusively by psychology.

But you can’t discount the fact that price discovery likely played some role in the fall of bitcoin through the introduction of futures, even if it was only from a psychological level.