Bitcoin’s rise is a sight to behold. Just look at this chart: 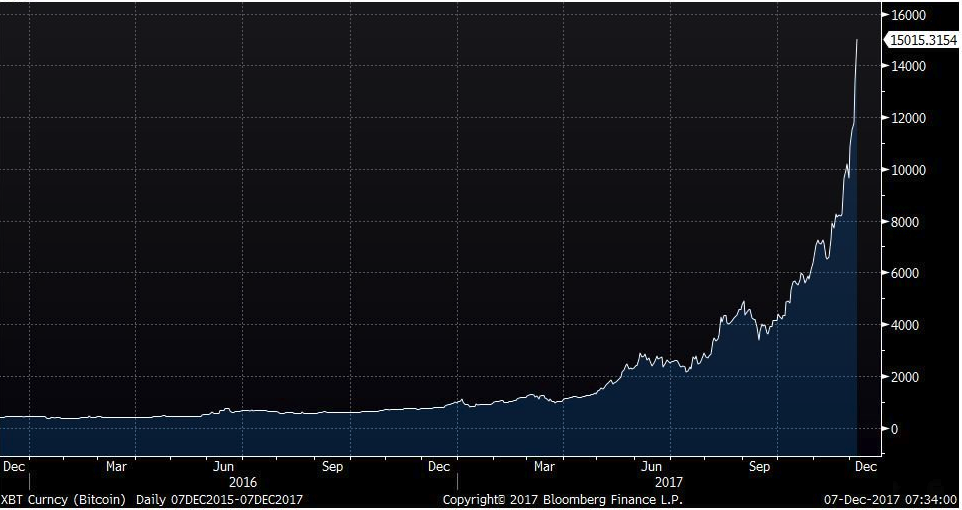 It’s unreal. I honestly believe we have a front row seat to what could end up being one of the craziest manias of all-time. Manias and panics fascinate me to no end and I’ve probably read every book on the subject. I wasn’t into the markets during the dot-com bubble so I’m loving every minute of this.

At the outset of 2017, the market cap of the entire cryptocurrency universe was less than $20 billion. That number has now broken through $300 billion.

How does Bitcoin go from a 9-page whitepaper (that is surprisingly simple and not that over-the-top) written less than a decade ago by an anonymous person (or persons) to something that has spawned a new industry and an all-new asset class worth hundreds of billions of dollars?

There are a lot of factors but here’s the way I see it:

Storytelling. Bitcoin has no fundamentals to speak of. No cash flows, no yield, no price to earnings ratio, and no physical assets backing it up. For all intents and purposes, it’s based on faith in the system and technology it’s built upon. But in some ways, this is true of the dollar as well. Both are somewhat opaque, function based on trust, and can be volatile (although Bitcoin’s volatility is obviously magnitudes higher).

To understand Bitcoin’s rise to prominence you have to understand how large groups of people come to believe in anything. In his book, Sapiens: A Brief History of Humankind, Yuval Harari discusses the role storytelling has played in our ability to go from small tribes to founding cities and countries with millions of people:

The secret was probably the appearance of fiction. Large numbers of strangers can cooperate successfully by believing in common myths. […] Just try to imagine how difficult it would have been to create states, or churches, or legal systems if we could speak only about things that really exist, such as rivers, trees and lions.

As Michael Mauboussin once said, “Stories are what stick with us. Statistics do not.”

Some refer to Bitcoin as the “millennial gold” which may be true. Somehow gold has managed to be a store of value for thousands of years, mostly because it has a good narrative attached to it.

Technology. Of course, faith, promise, and storytelling alone aren’t enough to create billions of dollars out of thin air. There also has to be a legitimate foundation to build the potential around. I’m by no means an expert, but it sounds like researchers have been studying cryptography for decades. This isn’t something they figured out overnight.

Bitcoin is just the best peer-to-peer version of electronic currency that figured out a way to incentivize programmers to validate the network through the proof-of-work concept to verify the accuracy of the ledgers and transactions (that was my attempt to sound intelligent on this concept…I’m trying).

Technological progress is a driver of economic progress which, over the long-term, is a driver of stock market gains. But technological progress doesn’t occur overnight and the financial impact of innovations rarely occurs immediately. Therefore, investors in both businesses and markets are forced to make estimates on the potential of ideas that are still in the infancy stage. The excitement behind new and exciting technology and all its potential captures the public’s imagination which leads them to rapidly bid up prices.

One of the reasons this concept didn’t make sense to me right away is because it doesn’t really seem like something we need in the U.S. But the best argument I’ve seen for a wider adoption is for people outside of the U.S. who don’t have the same types of open markets and financial backbone that we do. They need another store of value to avoid confiscation by their government.

The fact that this technology could potentially help people in countries in the developing world – where there is more corruption and higher banking costs – has made this a global phenomenon. The combination of new technologies and a potential for global demand could be one of the reasons the cycles in cryptocurrencies seem to operate at hyper speed.

Decentralization. Since the Great Financial Crisis there has been a growing distrust of large institutions, from governments to central bankers to the banks and the amount of debt held in the system. One study found that 92 percent of those aged 18-34 do not trust financial institutions with money matters. This lack of trust has led many to question the current way of doing things.

The anonymity and decentralized nature of cryptocurrencies have filled this void for many. The Bitcoin blockchain appeals to this group because it can potentially avoid many of the frictional costs, barriers, and gatekeepers built into the current system. In some ways, Bitcoin could be seen as a barometer of sentiment towards authoritative bodies.

The term “perfect storm” gets thrown about too liberally in the financial markets but for something like this to take off there needs to be an element of timing. The fact that this idea followed the biggest crisis since the Great Depression at a time of huge advances in technology was perfect timing to get this off the ground.

Resilience. There have now been three separate crashes in the price of Bitcoin in excess of 85 percent since 2010. Every quarter since early 2013 has seen a drawdown of 20 percent or worse. The fact that these types of crashes and volatility haven’t spelled doom for cryptocurrencies is one of the strongest votes of confidence they’ve received. It also helps that each time it has come back at higher and higher price levels. In a sense, higher prices are validating.

These are some of the most important factors that got Bitcoin to this point but it’s going to take more than technological promise and a seductive narrative to keep prices rising (one would think). It could take years for cryptocurrencies to live up to their lofty expectations, so it will be fascinating to see how much of its potential is already priced in and how patient investors will be in the meantime.

Anyone who tells you they know where this thing is heading, how to value it, where it ends, etc. is nuts. No one has a clue. This is everything you’ve ever read about the markets all wrapped into one — FOMO, supply & demand, human nature, behavioral biases, volatility, booms, busts, uncertainty about the future, etc.

It’s impossible to offer investment advice on something like Bitcoin so I’m not even going to try. This is all so new and foreign to everyone that we’re all just are making things up as we go.

Regardless of how it all shakes out, I for one am enjoying the show.

Further Reading:
What Could Send Bitcoin Into the Stratosphere

And hear some further thoughts from Michael and I in our podcast episode from last week on Bitcoin:
Animal Spirits Episode 6 – Bitcoin, Bubbles & Bananas