In Seeking Wisdom: From Darwin to Munger, Peter Bevelin has an interesting take on the frequency of extreme events:

Statistics shows that the frequency of some events and attributes are inversely proportional to their size. Big or small changes can happen but the bigger or more extreme they get, the less frequent they are. For example, there are a few large earthquakes, fires, avalanches, or cities, but many small ones. There are a few billionaires but many millionaires.

The size and frequency of these events and attributes has a statistical pattern — a scaling relationship that is about the same independent of size. For example there is a scaling relationship between earthquake magnitude and frequency. Based on observations from 1990, U.S. Geological Survey estimates the average annual frequency of magnitude 8 and higher earthquakes to 1, magnitude 7-7.9 to 17, magnitude 6-6.0 to 134, and magnitude 5-5.9 to 1319 earthquakes. Still, the patterns are based on past statistics and estimates. They don’t help us to precisely predict future events. For example, catastrophes occur randomly. We don’t know when the next big one will hit.

There are obvious parallels to the financial markets here. You can look back at the past 100 years or so of financial market history and come up with a bunch of different averages or indicators to show how things have played out in the past. But anyone relying exclusively on that playbook will continue to be surprised again and again as history never repeats itself. Average is a rarity in the markets at any given time.

Investors are constantly using those historical inputs and their own memories to make current decisions so the markets are constantly evolving. I’m always surprised by how investors can have completely different takeaways from extreme market events depending on their world view and experiences. 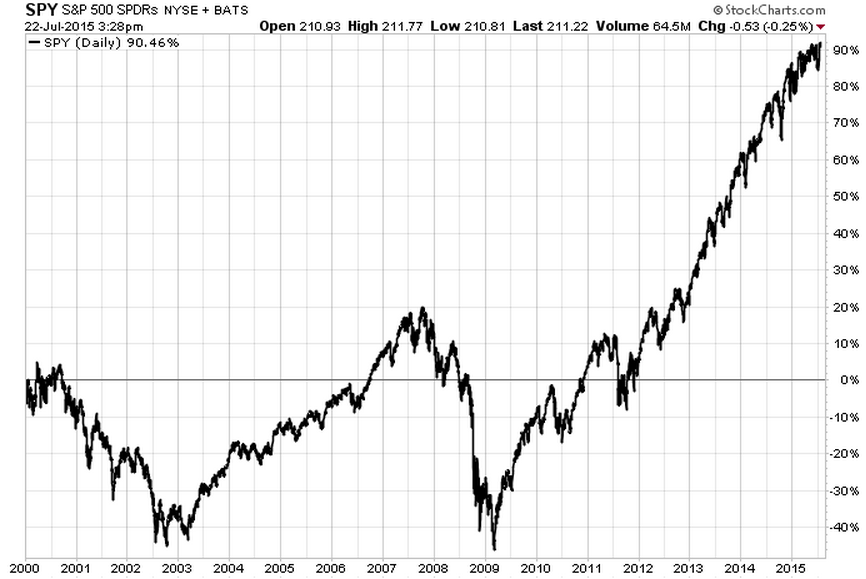 …but that story gets interpreted in many different ways.

One of my biggest lessons learned from this cycle is that anything is possible in the markets. Certainty is rarely rewarded, and even when it is, it doesn’t last long. The massive swings in these cycles go much further and last much longer than I would have thought possible.

Others seem to have their own takeaways from the past decade and a half. If anything, it’s emboldened some to believe that they’ll be able to predict when the next huge crash will hit. Living through two market crashes has amplified the hindsight bias for many investors.

I’m not sure what, if anything, this means as far as how the next bear market will play out.  But I have a feeling investors will surprised by when and how it transpires. When things do eventually head south and this giant bull finally takes a breather, you can be sure that panic will set in because people will still be caught flat footed. I can’t remember where it came from but one of my favorite quotes from the past few years is, “never be surprised that you’re surprised by the markets.”

I know that there will be more market panics and crashes in the future, but I continue to believe that it’s a waste of time to try to predict the tops and bottoms. It’s just asking for the markets to play mind games on you. No one knows when the next big one will hit. Yet I don’t think that will stop investors from trying to figure it out.

To quote Jerry Seinfeld, “Good luck with aaaaaall that.”