In their quest for world domination in your home, this week Amazon purchased a company called Ring which specializes in video doorbells and security cameras. The idea is that eventually people will allow Amazon to leave packages right inside your home.

They purchased the company for more than $1 billion. The best anecdote from this story was not the acquisition itself but the history of Ring in the early days.

It didn’t take long for the media outlets to begin reporting the fact that Ring founder Jamie Siminoff pitched his company to the show Shark Tank back in 2013. Here’s the backstory courtesy of Quartz:

In November 2013, an entrepreneur named Jamie Siminoff pitched his idea for a “smart doorbell” on the reality show Shark Tank. The show’s judges turned him down. Siminoff forged ahead with the concept, and news broke yesterday (Feb. 27) that Amazon is buying his company, Ring, for over $1 billion.

In his Shark Tank pitch, Siminoff said he was seeking a $700,000 investment for a 10% stake in his then-struggling startup—called DoorBot at the time—which he thought was worth $7 million.

Obviously, had any of the Shark Tank judges invested in Siminoff’s idea, they would have made a killing.

It would be easy to poke fun at these investors for passing up on the opportunity of a lifetime. But it’s always easy to look at the winners and kick yourself for not investing in them.

This seems to be the way most business schools and books tend to look at the world. They start with the most successful businesses or ideas and try to reverse engineer them. The problem when you use only successful outcomes in your analysis is that you ignore all of the people or companies who tried a similar route and failed.

The old saying is that the winners write the history books.

I was reminded of this saying while reviewing the latest Credit Suisse Global Investment Returns Yearbook 2018. They’ve used this one before but it’s worth revisiting how the U.S. took over the world stock market over the past 100 years or so:

It’s easy to come up with reasons after the fact as to why the U.S. has overtaken the global stock market:

Sometimes I think investors these days are spoiled because we’re all able to look back at long-term charts of the stock market and view decades of historical performance figures. It’s easier to preach a long-term buy and hold type of approach when you have a long history of success to point to.

But try to put yourself in the shoes of an investor in the 1940s or 1950s. Here’s what the long-term chart of the Dow looked like at the end of World War II: 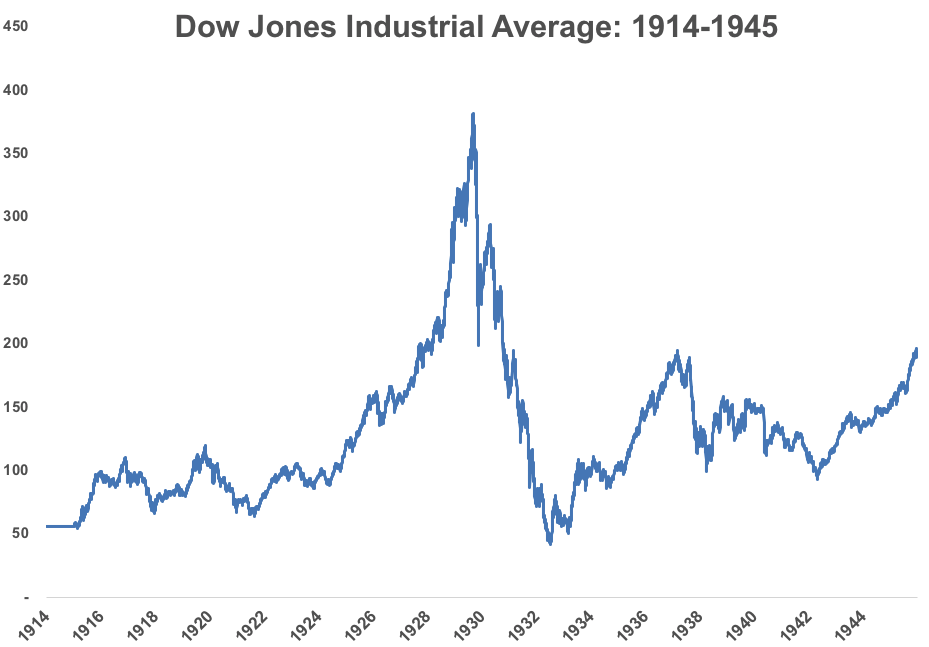 Bookended by two world wars, investors had also lived through the Great Depression which saw stocks fall nearly 90%. What would make investors at that time think the stock market is a safe bet for the long-term? Who could have foreseen 10-11% annual returns from this point going forward?

(Sidenote: The annual price returns over this 30+ year were close to 3%. With dividends reinvested it was actually closer to 8% a year which is much better than the portrayal in this chart. The problem is it was basically impossible for anyone to reinvest dividends at that time or invest in a diversified portfolio of stocks like the Dow in a cost-effective manner.)

I’m a huge bull on the prospects for America going forward. I’m a firm believer in the idea that, although we face challenges and things aren’t perfect, people still get up in the morning looking to improve their state in life. The stock market remains the most efficient source of corporate profits from future advances in technology for the majority of investors.

But it would be silly to assume it’s a layup that the U.S. will dominate global stock markets as it has for the past 100+ years. It’s a possibility but not a foregone conclusion.

Coming up with explanations for past successes is easy but figuring out who the winners will be going forward never is.