A number of years ago, a staffer at the Pentagon prepared the following document: 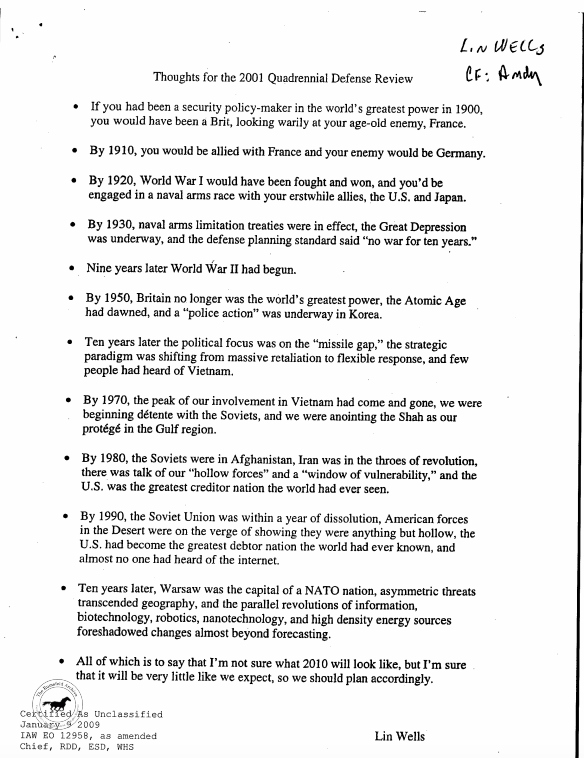 Trying to figure out what the future holds in terms of geopolitical events is a fool’s errand. No one knows what’s going to happen. The same applies to finance and economics.

Here’s my attempt at re-creating this memo in terms of the markets and the economy:

If you had been an economic policy-maker in 1900 you had just witnessed two depressions — or panics as they called them back then — in the past decade. The U.S. was still an emerging market country of sorts that was experiencing a recession once every 3 years for the past 20 years or so and a series of bank runs on a regular basis. There was no central bank.

By 1910, the U.S. was still dealing with the fallout from the Panic of 1907 that saw financier J.P. Morgan almost single-handedly shore up the banking system with his own money. Theses events would eventually lead to the creation of the Fed in a few short years.

By 1920, the world was dealing with a huge debt burden from WWI and was just falling into another depression at the start of the year as corporations were figuring out how to deal with a peacetime economy for the first time in a number of years.

By 1930, the stock market and economy had been humming along nicely during the roaring 20s that saw huge gains in innovation for the decade. But things came to a screeching halt when the stock market crashed in August of 1929, an ominous sign for the coming years.

By 1940, people were still scarred from Great Depression, another large economic contraction in 1937, two enormous stock market crashes, a decade of deflation, ultra-low interest rates, no economic growth, negative corporate earnings growth and a lost decade in the housing market. It’s safe to say the 1930s were the worst economic decade of the past 100+ years.

By 1950, things had slowly but surely started to get better. WWII had brought the economic world back from the brink by finally igniting some inflationary pressures. The U.S. was the most powerful nation in the world and came out of the war in better shape than their fellow world powers. There was almost 6% real GDP growth for the decade, deflation was finally kicked, strong profit growth, a rising stock market, a nice housing market comeback and interest rates that had remained low for a number of decades.

By 1960, the middle class was growing, the stock market had just experienced the greatest decade in history, there was a baby boom under way, the economy was booming, people were buying houses and moving to the suburbs, and peace and prosperity generally ruled the day.

By 1970, it appeared that the nation was falling apart. Government spending on the Vietnam War had started to ignite inflationary pressures that would end the boom times and had divided the nation. Bond yields finally began to rise at the end of the 60s and the stock market had lost all momentum from the 1950s bull market.

By 1980, investors were terrified of the stock market. They’d just witnessed a decade marked by sky high inflation, rapidly rising commodities prices, an end to the gold standard and the country was entering a recession. Stocks had basically gone nowhere for a number of years and bonds were now showing nearing a 40% loss in terms of purchasing power over the previous three-plus decades after interest rates rose to double-digit levels.

By 1990, it was clear that inflation has been finally been subdued. Although the U.S. stock market had one of its best decades ever everyone was convinced that Japan was going to overtake the U.S. as an economic superpower. The 1987 Black Monday crash still had investors on edge about the stock market.

By 2000, it appeared that Alan Greenspan & co. had ushered in an era of the great moderation that had seen just two recessions in the previous 20 years. Investors all wanted to become day traders because Internet stocks were seemingly minting millionaires on a daily basis in the “new economy.” Everything was amazing!

By 2010, the S&P 500 had just seen a lost decade and gotten cut in half in both the tech bust and GFC. People were worried about double dip recessions, the stock market was assumed to be in a dead cat bounce that would surely crash again, there were fears of hyperinflation, rising interest rates, a crash of the U.S. dollar, the government going broke and housing was never going to come back again. Interest rates were rising across Europe as their debt crisis was just flaring up and everyone assumed the Fed was powerless to do anything. Everything was terrible.

By 2016, people assume we’re in a secular stagnation, interest rates and inflation will never rise in the future, no one can innovate anymore, bonds are unstoppable in the midst of a 40+ year bull market, there are negative interest rates around the globe and the Fed has been propped up both the market and the economy. Very few people are optimistic about the future.

All of which is to say that I’m not sure what the next 10, 20 or 30 years will look like, but I’m sure that it will be very little like we expect, so we should plan accordingly.

Further Reading:
What If the Future is Better Than We Think?