“Humanity is now entering a period of radical transformation in which technology has the potential to significantly raise the basic standards of living for every man, woman and child on the planet.” – Peter Diamandis

I’m a fairly optimistic person, but it can be difficult at times to keep a glass-is-half-full mentality when the majority of the news these days is mainly negativity or viral Internet stories.

There are some well-educated people out there making the case that economic growth in the future won’t be able to keep up with the averages we’ve become accustomed to in the past.

This could lead to much lower returns in the financial markets and a decreased standard of living. Wealth inequality continues to widen the gap between the haves and have-nots, creating even more ammunition for the coming disaster.

It’s easy to get sucked into this line of thinking because usually the PhDs presenting the case have complex models and a narrative to back up their claims. In an uncertain future, sometimes it’s easy to default to a pessimistic view on where things are heading.

But what if just the opposite is true?

What if people are underestimating the potential of future worldwide economic growth and innovation.

Bill Gates shared a few positive developments in his recent look back on 2013:

Along those same lines, Zack Beauchamp outlined his reasons that 2013 was the best year in human history:

1. Fewer people are dying young, and more are living longer.
2. Fewer people suffer from extreme poverty, and the world is getting happier.
3. War is becoming rarer and less deadly.
4. Rates of murder and other violent crimes are in free-fall.
5. There’s less racism, sexism, and other forms of discrimination in the world.

In the book Abundance: The Future is Better Than You Think, author Peter Diamandis makes the argument that we are underestimating the potential for future progress to solve the world’s biggest problems.

Here are some interesting points from the book to consider:

It’s impossible to predict what can happen when exponential growth takes hold because it means improvements build on themselves much like compound interest on steroids.

Here’s a chart from the book that shows how population and technological growth has absolutely exploded in the past couple of centuries: 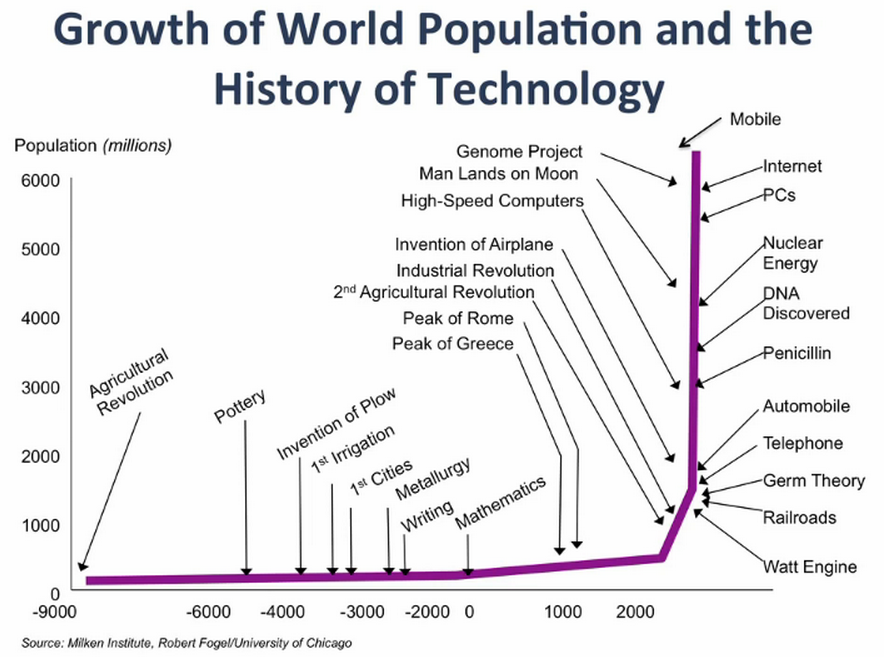 Diamandis argues that most people can’t even begin to imagine where the continued technological progress will take us because it’s hard to wrap your head around exponential growth.

And not in some distant future hundreds of years from now.  Back to the Future II could be here sooner than we think.

He says that by the 2030s we could see major breakthroughs in all of our biggest issues. These are some of the possible problem solvers:

The benefits from areas such as improved education could also lead to increased freedom and democracy in oppressive countries, although this one could take some time.

What are the implications for you and your wealth?
It’s hard to tell right now whether all of these predictions from Diamondis will work out.

But if even a fraction of what he is forecasting comes to pass, this could mean (1) higher standards of living around the globe, (2) a rising middle class of consumers to purchase products, save and invest, and (3) technologies coming to light that were once only reserved for the movies.

Not to mention the fact that many of these breakthroughs could help bridge the wealth gap and bring billions of people out of poverty (Many see a situation where the rich continue to get richer off of the technological progress but Diamondis makes the case that it will actually have a much greater impact on the poor than the rich).

There could be new industries, sectors and companies to invest in and higher global economic growth with a new class of consumers on board to buy goods and service.

It’s easy to fall into the trap of assuming everything is terrible in the world. Reading this book made me realize how great we have it now and how amazing life could potentially be in the future.

We are not without problems in the world right now.  Things could get worse before they get better.

The point is that no one has any idea about the shape of the future especially when it comes to forecasting economic and technological developments.

I choose to believe that people will continue to want to better their lives, innovate, get smarter, help others and keep the growth engine moving in the right direction.

No actionable investment moves from this information…just something to consider.

Sources:
5 reasons why 2013 was the best year in human history (Think Progress)
Good News You Might Have Missed in 2013 (Bill Gates)
Abundance: The Future is Better than You Think

Check out this video of Abundance author Peter Diamandis for more:
Abundance is our future (TED Talks)