The Fed is hiking interest rates. Mortgage rates are rising. Homebuilder stocks are getting annihilated. The economic recovery is well into its ninth year. The unemployment rate is the lowest it’s been in 50 years.

People are asking — are the markets predicting a recession?

The old joke is that the stock market has predicted 9 out of the last 5 recessions.

Investors assume the stock market is forward-looking, so when pundits begin “reading the tea leaves” to look for clues as to what may happen next the knee-jerk reaction is to look at the direction of stocks.

Historically speaking, the stock market hasn’t gotten ahead of many recessions. 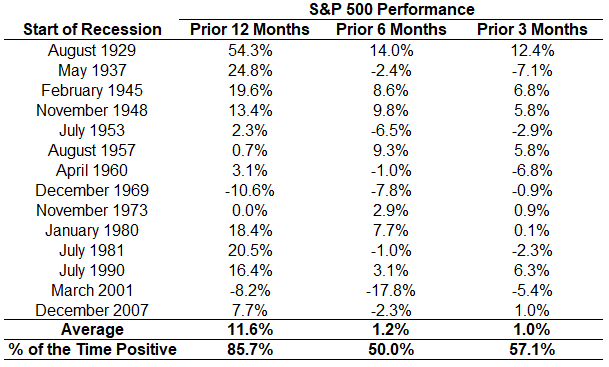 The lead up to March of 2001 was really the only meaningful correction that occurred before the onset of a recession and that was because of the dot-com crash which preceded the recession by around a year. Most of these other numbers look fairly run-of-the-mill and not out of the ordinary.

Of those 47 double-digit sell-offs, 31 of them occurred outside of a recession and didn’t happen in the lead up to a recession.

That means around 66% of the time, the market has experienced a double-digit drawdown with no recession as the main cause.

Of those 31 which occurred outside of a recession, the losses were -18% over 154 days, on average.

We’ll have a recession at some point but odds are the stock market won’t tip us off ahead of time. In fact, most of the time people don’t even realize we’re in a recession until after it’s already begun. NBER typically gives the official word for a recession around the time they’re ending or already in the midst of a slowdown.

I suppose it’s possible the stock market has gotten more intelligent about sniffing out an oncoming recession.

Every time stocks begin to fall it feels different. And maybe this time is.

But maybe it wouldn’t be the worst thing in the world for stocks to fall outside of a recession so fundamentals can play catch up a little bit. I wouldn’t mind seeing lower valuations and higher dividend yields in an environment where people don’t lose their jobs because of an economic slowdown.

Further Reading:
Is the U.S. Due For a Recession?