CNBC’s Art Cashin recently stated on that every decade since 1850 in the U.S. has had a recession.

Since the Great Recession ended in 2009, that obviously means we haven’t had one this decade. Someone who thinks correlation implies causation in these things would assume that means we’re due for a recession in the next couple of years before the new decade hits.

I didn’t doubt Cashin’s stats but I had to dig into this one to see what the historical record shows: 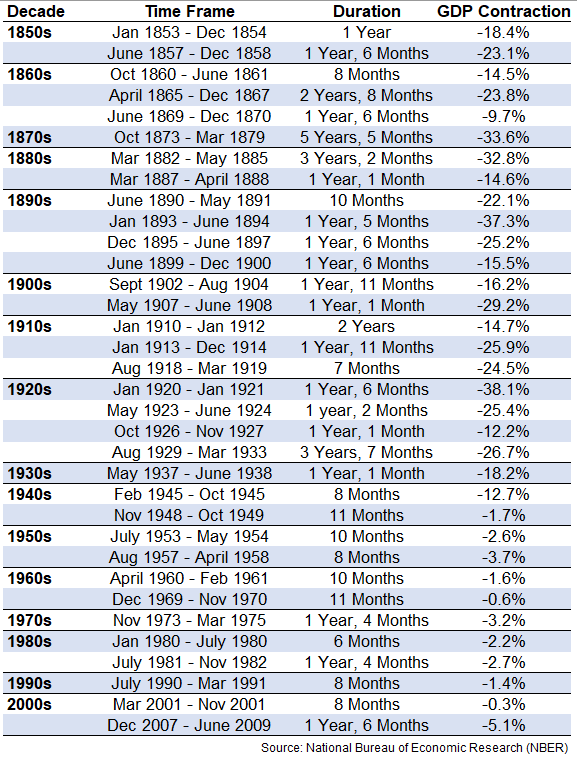 It’s true. The U.S. has had at least one recession every single decade since California became the 31st state in the union.

Looking at the data, what stands out is how volatile the U.S. economy once was.

The Great Recession looks tame in comparison to some of the panics of yesteryear. It’s become easy to hate on central banks these days, but it’s hard to argue that the Fed hasn’t helped the U.S. economy become less volatile over time. The Fed doesn’t control everything, so you could also attribute this to the fact that the U.S. was basically an emerging market through much of that early period and has since matured.

Of course, the data collection methods back then were likely substandard. And GDP is still a relatively new concept. It wasn’t developed until after the Great Depression. Even ‘recession’ is a relatively new term in economics. During the 1800s, most economic downturns were called panics after some wild boom-bust periods in real estate, which then morphed into depressions and finally, we’ve settled on recessions

(Side note: Can you imagine if recessions were still called panics? As if people don’t already freak out enough as it is when the inevitable down part of the cycle hits?)

The last recession ended in June 2009, which also makes this the second longest expansion in U.S. history. One more year or so and this one will pass the relative calm of the 1991-2001 time frame.

No one can really predict when the next recession will hit with any degree of precision but these things don’t operate on a set schedule. Expansions don’t die of old age. Economic cycles don’t care who the president is and they certainly don’t care what the calendar says.

For instance, Australia hasn’t had a recession since 1991. They have a much different economic make-up than the U.S. but it goes to show that recessions don’t have to occur simply because there hasn’t been one for a while.

Recessions typically occur because certain parts of the economy get overheated and then corrected. Yet even economists don’t have an overarching model or theory that can accurately explain when, why or how that will happen.

The reason this is the case is that something as complex as economic activity is mainly controlled by human behavior, not rational economic textbook theory.

Charlie Munger once asked a group of college students, “How could economics not be behavioral?” His response: “If it isn’t behavioral, what the hell is it?”

Human behavior isn’t predictable enough to rely on the calendar to forecast the next recession. The next one could occur in 2019 or 2025. I wouldn’t be surprised either way.