Since the end of 2014 there has been plenty of movement in the stock market but the S&P 500 hasn’t really gone anywhere: 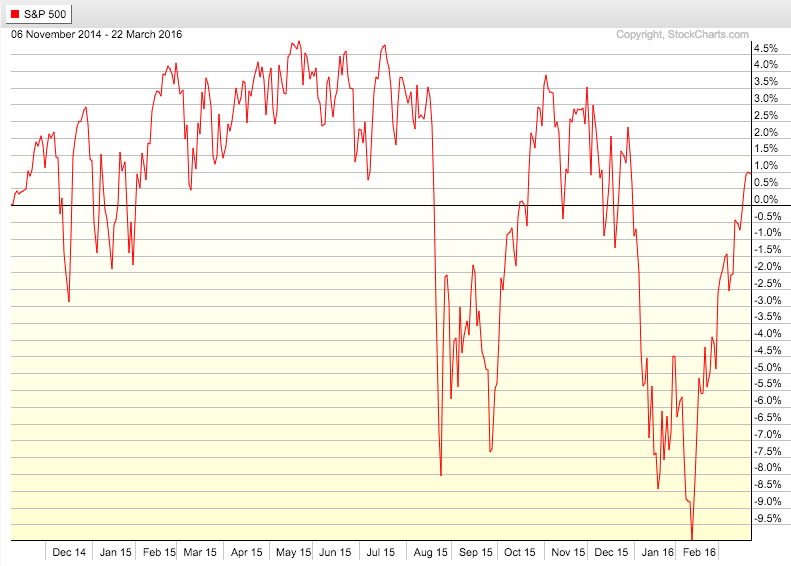 These periods can be very frustrating for investors because most people tend to think in terms of being bullish or bearish. They’re constantly looking for the end of the bull market or the resumption of the uptrend that started in 2009. A market that goes nowhere basically leaves no one happy.

James Paulson of Wells Capital Management has a term for this type of environment — a bunny market (get it — because the market is hopping around). Here’s his description from a research note this week:

Most bunny markets occur in the latter part of an economic recovery. Stocks initially recover aggressively after a recession. However, as the recovery matures, cost-push pressures, inflation, and higher interest rates begin to pressure the bull market. This often resolves into a bunny market for the balance of many economic recoveries. Examples highlighted in the Exhibit include the late-1940s, between mid-1951 to mid-1953, 1956 to 1957, 1959 to 1960, the last half of the 1960s, most of both of the 1970’s recoveries (inflation and cost-push pressures were almost immediately evident in the 1970’s recoveries), and finally 1987 to 1990. Bunny markets have also occurred as investors initially adjust to the Federal Reserve starting to tighten monetary policy. For example, this happened between mid- 1983 to mid-1985 and again between 1993 and 1994.

Here’s the exhibit Paulson mentions where you can see the various periods where the market was going nowhere: 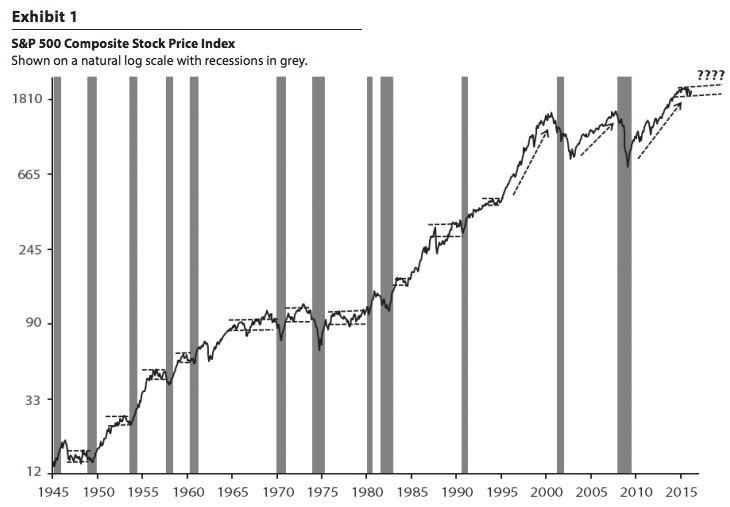 I hope the term ‘bunny market’ sticks if for no other reason than we get to hear pundits debate whether they’re a bull, a bear or a bunny (it’s also just in time for Easter this weekend).

I decided to look back at the historical data to see how often these types of flat markets have occurred. I used total returns on the S&P 500 to see when muted market returns were seen over two, three, five and seven year periods going back to 1926: 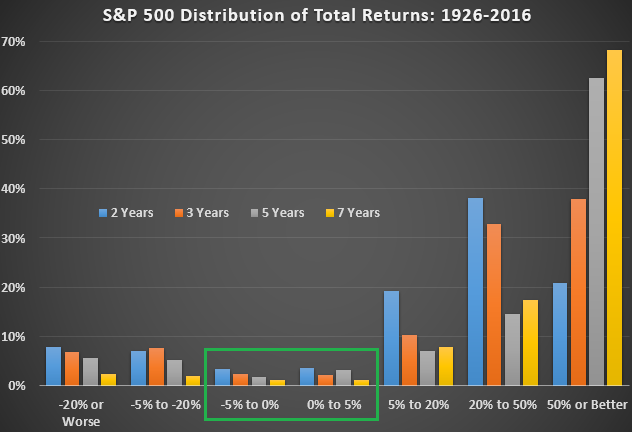 What this chart shows is the amount of time total returns on the S&P 500 have fallen within these given performance ranges. I’ve highlighted the middle section that shows the -5% to 0% and 0% to +5% ranges to show that flat markets are not the norm. In fact, over all  2 year time frames returns have only fallen within the -5% to +5% range just 7% of the time. Over 7 year periods, it only happens 2% of the time.

So bunny markets don’t happen all that often, which is part of the reason so many investors are so frustrated right now. A flat-ish market is out of the ordinary. Investors don’t like to see things that are out of their comfort zone.

This can lead to unforced errors.

When nothing is happening in the markets people tend to try to make something happen on their own. The problem most don’t realize is that trying harder in the markets tends to leave you worse off, not better. Patience is always a virtue in the markets, but maybe more so during a bunny market. You can’t force things.

Source:
A bull, a bear or a bunny? (Wells Capital)

Further Reading:
The Pros & Cons of a Sideways Markets