“If you expect to be a net saver during the next five years, should you hope for a higher or lower stock market during that period?  Many investors get this one wrong.  Even though they are going to be net buyers of stocks for many years to come, they are elated when stock prices rise and depressed when they fall.” – Warren Buffett

Many times successful long-term investing means going against every gut instinct you have and doing the exact opposite of what it feels like you should be doing at the time. Because of this most investors only realize what they should have done in hindsight.

The conclusions investors draw from history are completely context dependent with regard to their starting point and sequence of returns. With a long enough time frame stocks have always been a solid investment (remember, new all-time highs mean stocks have always recovered their losses…every single time).

Shorten the time frame and stocks don’t always look so great.  One of these underwhelming starting points came in the year 2000.  As we all know by now the S&P 500 had a brutal three-year bear market from the technology boom and bust and then the financial crisis a few years later which cut the market in half yet again. 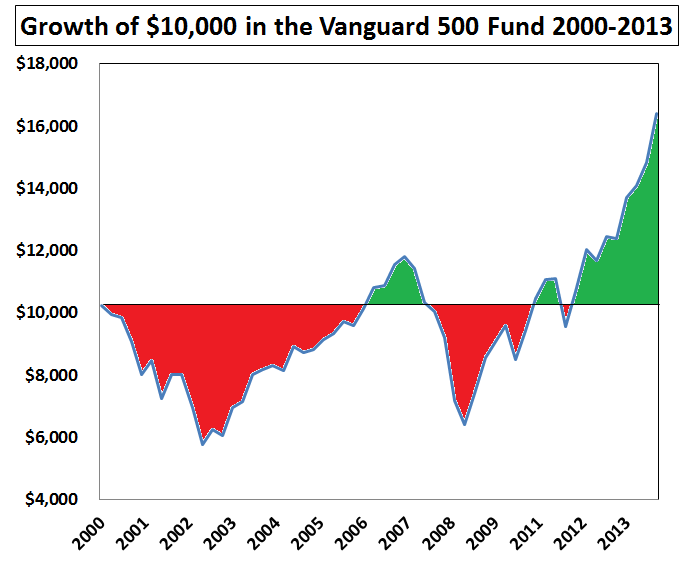 The red areas indicate when this hypothetical investment was underwater, while the green areas show when it finally went into positive territory.  Interestingly enough, since World War II, this was the longest period it has taken an investor to recover their original investment in the stock market (5 years and 8 months to be exact).

It can be difficult to have the correct perspective when you are following the markets on a daily basis, but most average investors don’t have to worry about this type of lump-sum, point-in-time investment performance. Most people save for retirement by periodically making contributions from their paycheck on a regular basis.

You can debate the mathematics of dollar cost averaging all you want, but the reality is the majority of investors are forced to invest this way because they build their portfolios one contribution at a time.  This makes sense for psychological reasons, as well, as it can be unnerving to invest a lump sum.

I decided to look back at the 2000-2013 period to see how a simple quarterly dollar cost averaging strategy would have worked out in this terrible market environment.  I’m assuming a quarterly contribution of $1,000 into the Vanguard 500 Index Fund at the end of each period.  Here are the results: 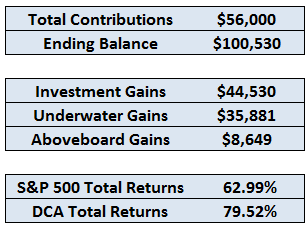 I’m stating the obvious here, but buying stocks when they’re down in price is a good idea if you are a long-term investor.  You added nearly 20% in total returns by buying on a regular basis.

Although the performance over the entire 2000-13 period is lackluster, stocks have been on fire since 2009, returning over 17% a year.  This is the point where investing in the red portion of the chart pays off.

Over 80% of the gains over the past five years in this example came from the contributions made in the red shaded area of the chart (underwater) while less than 20% came from the green area (aboveboard).

Personally, I have a number of decades in my retirement timeline to save and invest.  My human capital is my largest asset.  This means I should actually hope for sustained periods of below average stock performance.  It would be a chance to buy stocks at lower prices and higher dividend yields which will only increase my future performance and compounding capabilities.

These types of markets are no fun to deal with at the time from a performance perspective, but if you measure your time horizon in decades and not just a few years you should want your poor returns upfront.