JP Morgan put out a research note last week that named names of people who have called for a crash scenario in the past decade: 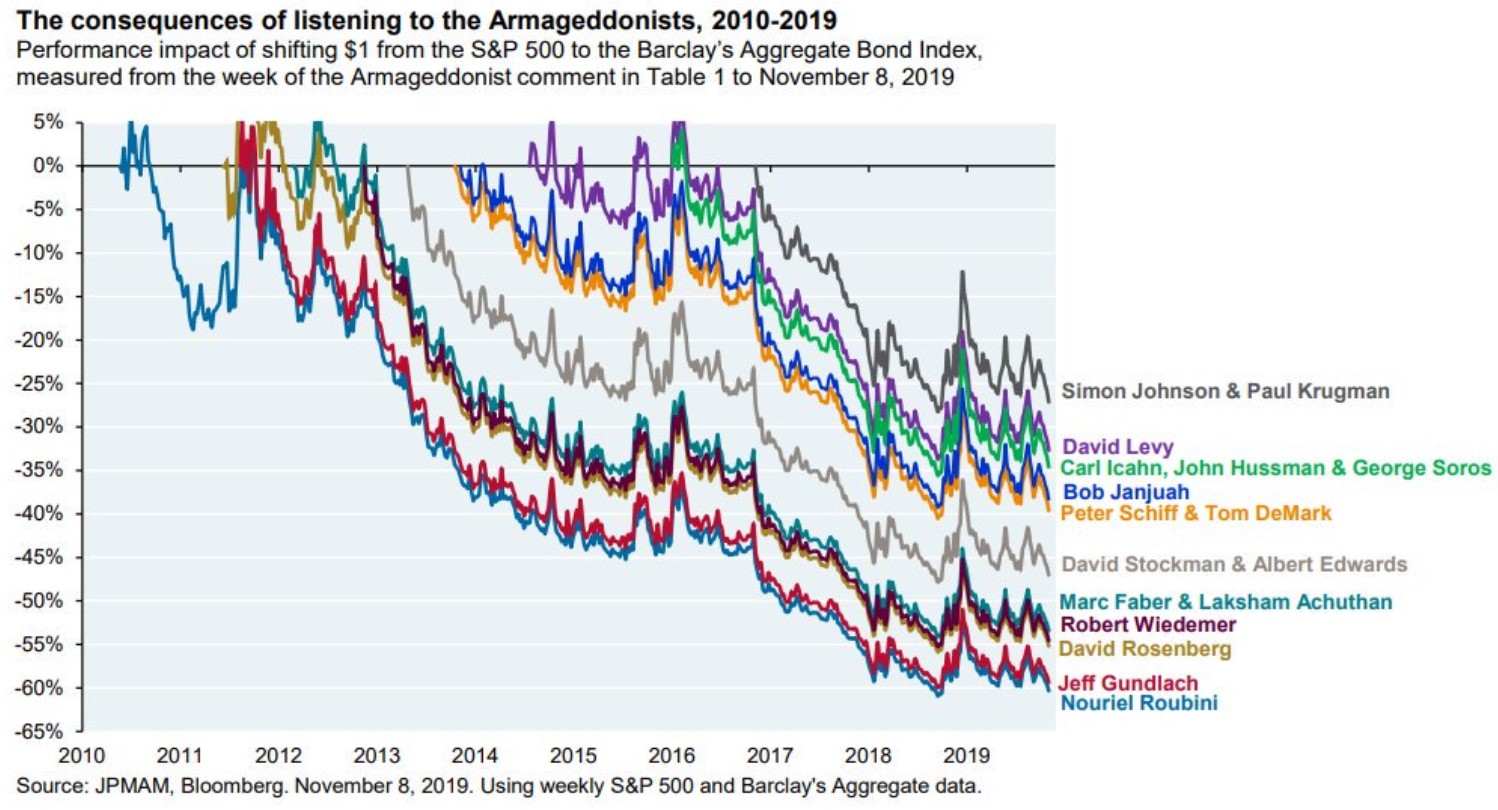 Not only that but this chart was accompanied by the comments these investors, pundits, and economists made at the time: 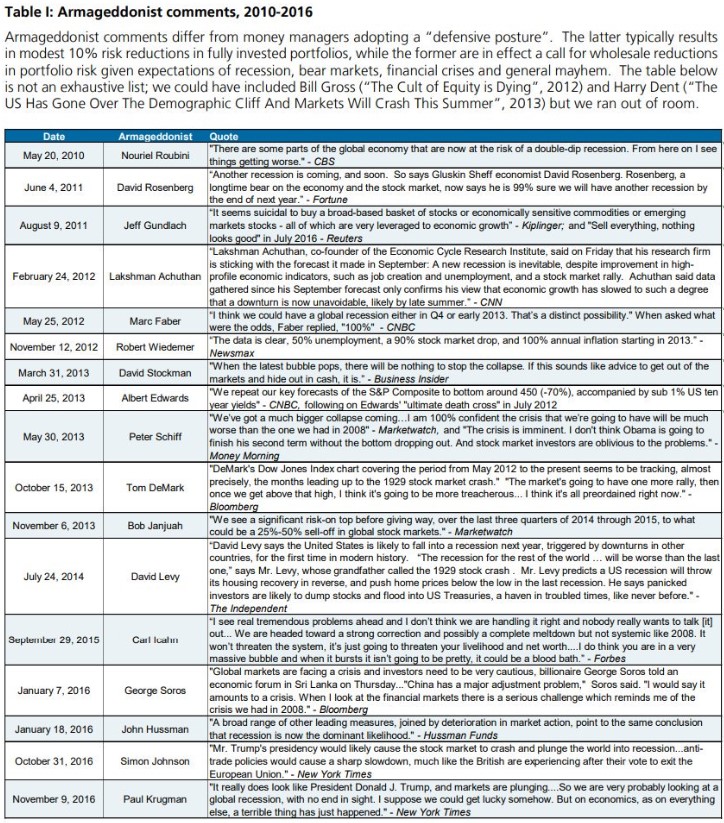 This feels like talking about a pitcher who’s throwing a no-hitter in terms of bad juju. They’re going to jinx the bull market.

Reading through these got me thinking about the different types of market crash calls. There has been such a huge influx of crash calls because of the 2008 debacle it seems only fair that we break these down by the motivating force behind these dire predictions.

The Perma-Bear Market Crash Call. There have always been perma-bears involved in the market to some degree. Typically they have a newsletter to sell you but you could make the argument this subset of pundits can play a helpful role by pointing out the negatives and forcing us to look at the other side of things (even when markets tend to move higher 3 out of every 4 years).

This group used to be more on the fringe but 2008 drove lots of investors over the edge. So now we get people who aren’t just bearish but basically root for the markets to go down to make themselves look better for being wrong all these years.

Perma-bears of the past used to put out research that gave you the other side of the argument. Now this group is full of tinfoil hat-wearing maniacs who simply predict a crash no matter what’s happening in the markets.

Just remember, even if this group pretends to be “right” when the next crash hits, they will never get you back into the market because there will always be room for another leg down in their minds.

They are not selling predictions, they are selling fear.

The Financial Media Market Crash Call. Like most people, the financial media, for the most part, missed the onset of the financial crisis. This is nothing to be ashamed of since the majority of the population didn’t see a once-in-a-generation crash coming either. But it appears the media has now swung the other way and doesn’t want to be caught flat-footed again.

So every time stocks fall 3% or so, the calls for a crash and markets in turbulence skyrocket. 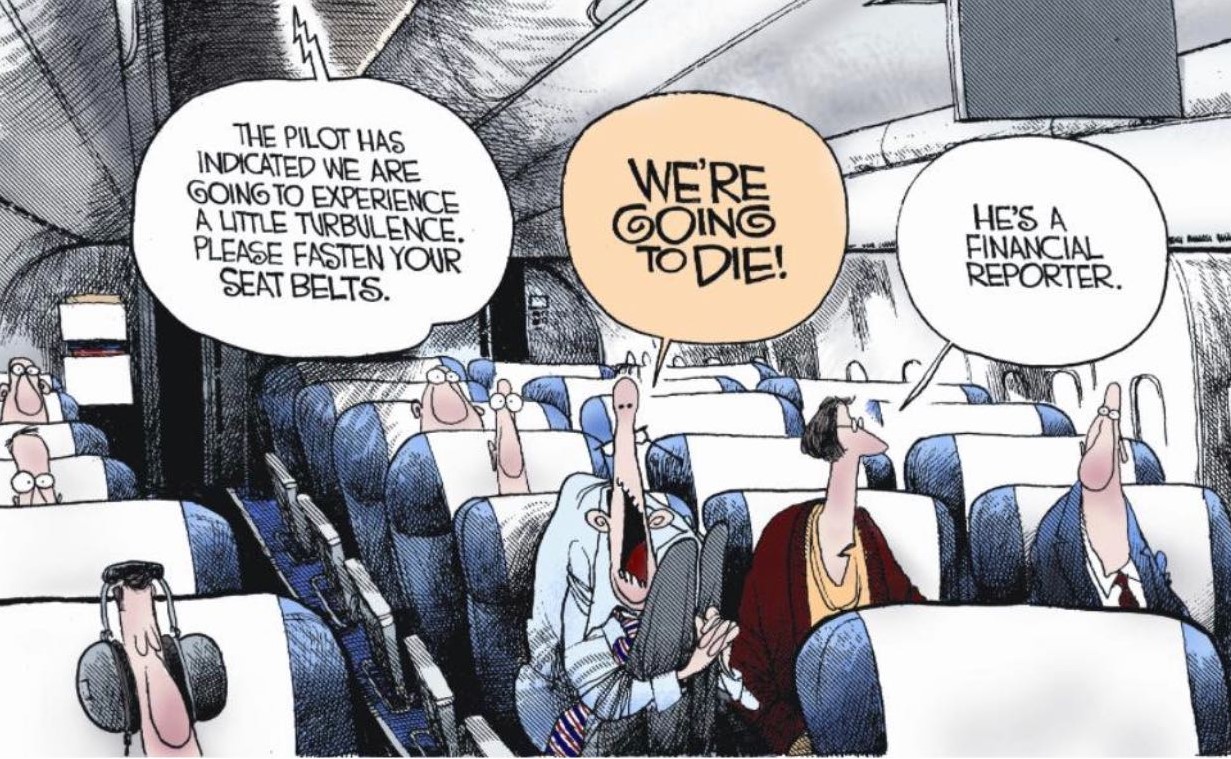 The Political Market Crash Call. Covered here earlier this week. This group is typically made up mostly of economists and people who watch too much 24/7 cable news.

The Marketing Market Crash Call. Being bearish sounds more intelligent than being bullish. No one gets a pat on the back for predicting a rise in the stock market since that’s just what it does most of the time. Bearish arguments make you feel smarter because being a contrarian is sexier than going along with the crowd (even though the crowd is technically right most of the time).

This is especially true for those in the hedge fund or fixed income space who don’t exclusively manage long-only equity funds. We discussed this on the podcast this week:

I’m not saying hedge fund managers make crash predictions in the hopes that it will drive up interest in their strategies. But I’m not not saying that either.

If you’re competing against low-cost index funds you basically have to position yourself as anti-index to get people’s attention. Market crash predictions work wonderfully as a marketing tool, especially since we’ve had two crashes this century alone.

I get why people in the industry do this.

The Measured Market Crash Call. This is the non-prediction prediction which goes something like this: we know stock markets are prone to crash because human beings are involved we just don’t know exactly when it’s going to happen or what the trigger will be.

Some call this type of prediction chickening out but I call it realistic. People always take things too far in the markets (in both directions). The stock market is like a giant Petri dish for human emotions and those emotions invariably lead to a cycle of booms and busts.

I’m sure I will be forced to deal with corrections, bear markets and market crashes in the decades ahead. That’s a given.

If the past 10 years have taught investors anything it’s that we just never know the when on these things.

Here’s the rest of the highlights from this week’s Animal Spirits including some thoughts on Disney+, Ryan Holiday’s new book, stoicism and why it’s so hard to put into practice and much more:

Subscribe to the Animal Spirits playlist to watch more of these highlights every week.