It’s been a tough year for investors.

Here’s a list of just some of the things that have led to a challenging year in the markets:

The combination of rising interest rates and higher inflation has led to not only a bear market in stocks but possibly the worst year for bonds in modern financial history.

Add it all up and at their worst points, total stock and bond market index funds were down nearly 25% and 17%. 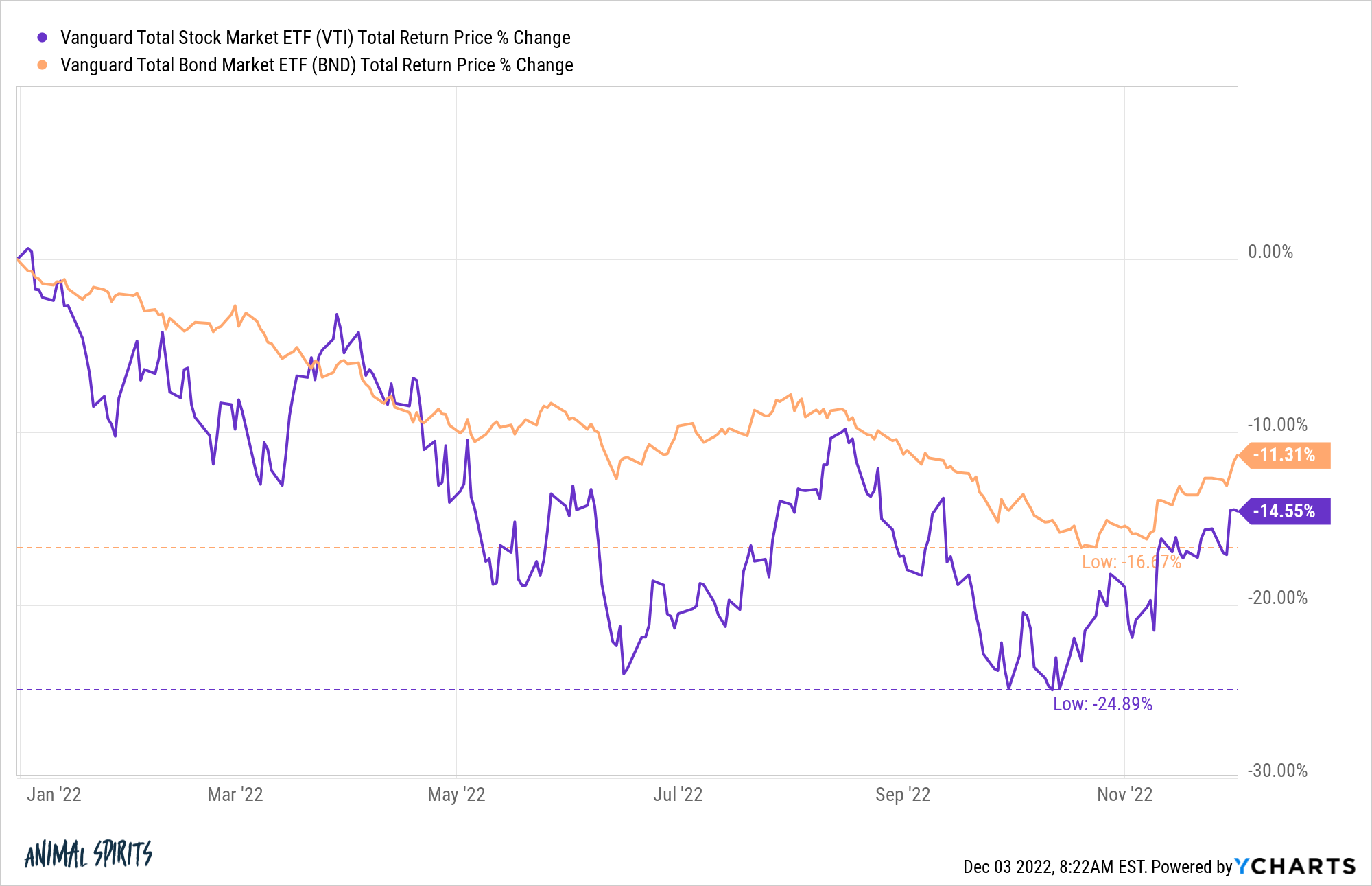 We’ve never seen a market environment like this where both stocks and bonds were crushed simultaneously.

There really has been nowhere to hide this year.

Now allow me to put my glass-is-half-full hat on — it feels like it could have been worse based on where we find ourselves now.

Here’s a look at the year-to-date returns for a number of different stock markets and strategies: 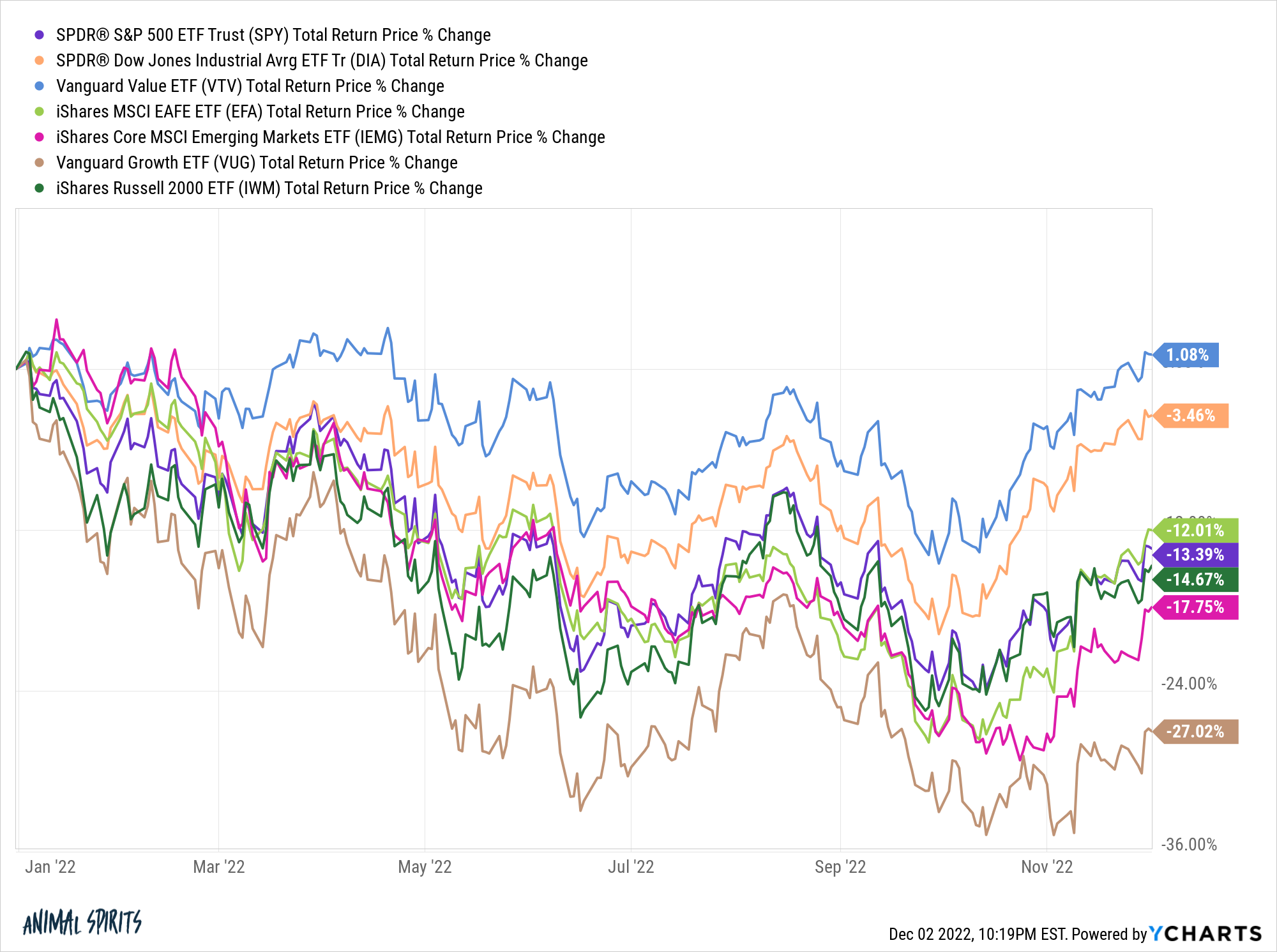 Value stocks are positive on the year. Yes, you read that right. In the black.

Small caps stocks are now down less than 15% after being down as much as 26% earlier in the year.

Emerging market stocks were down almost 30% but have come charging back to a more respectable loss of less than 18%.

If you own all tech stocks or previously high fliers you are down bad this year. But if you have some diversity in your stock holdings, it’s not the end of the world.

There is a similarly wide range of returns based on risk in the bond market this year: 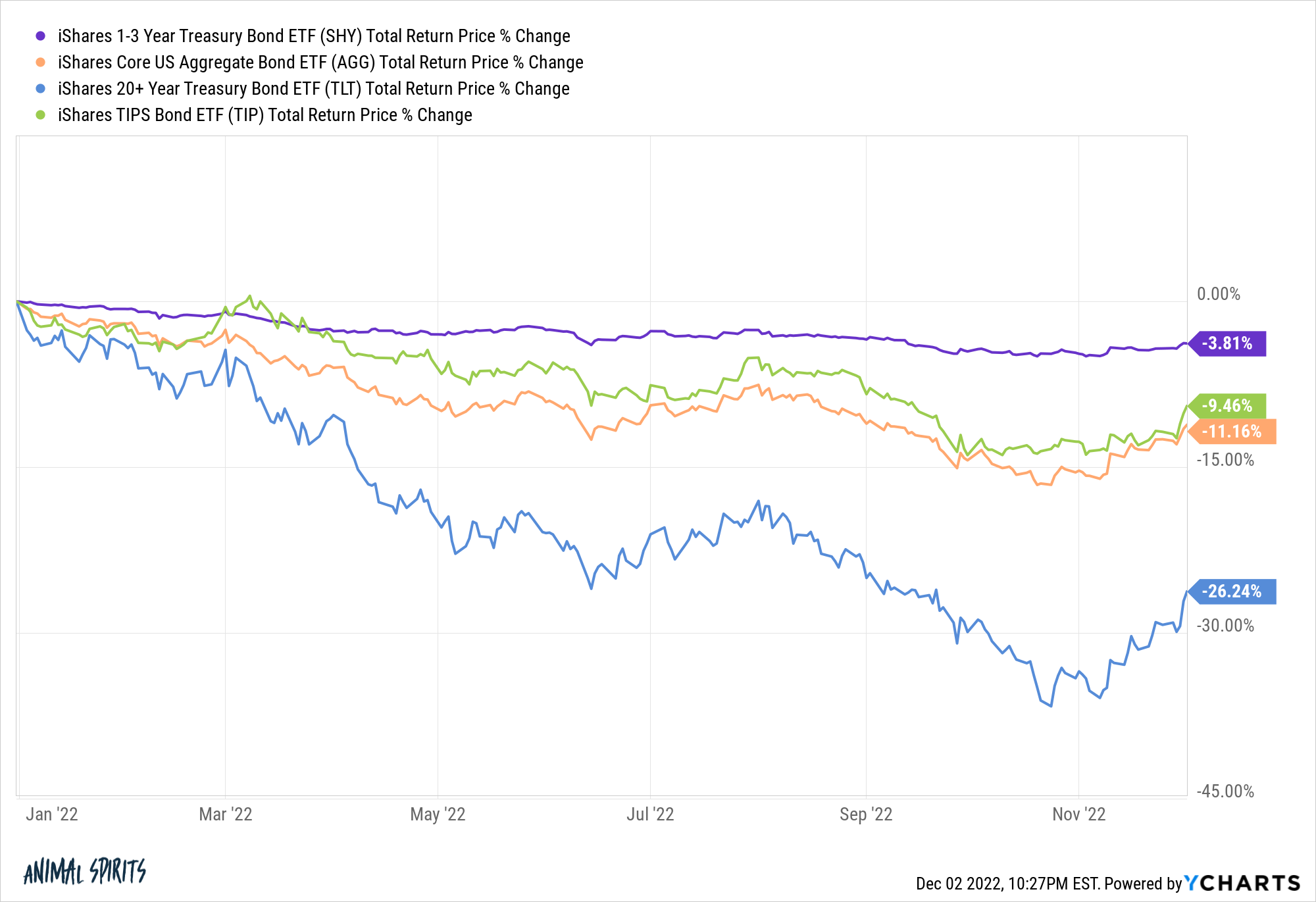 Long-term bonds are down about as much as growth stocks this year as duration has gotten killed in a rising rate environment.

The aggregate bond market is still down 11% while TIPS have fallen a little less than 10% this year.

But short-term bonds are down just 3.8%.

Much like the stock market, if you had your entire fixed-income allocation in the riskiest segment of the market, it feels like a crash.

If you spread the wealth and diversified your bond holdings, it’s still a painful correction in certain areas but again, not the end of the world.

When you consider everything that’s been thrown at diversified investors, it feels fortunate to be in correction territory as opposed to an all-out crash.

This year has been filled with air pocket downturns and subsequent relief rallies.

This year is really a good reminder that both gains and losses can be temporary, especially in the short-term.

It’s also true that one year returns don’t really tell you all that much, even when they make you feel relatively good or bad.

Rational investing comes from the understanding that long-run returns are the only ones that matter.

But sometimes you have to survive a whole lot of bad stuff happening in the short run to get there.

This is the kind of year where portfolio survival is a win in my book.

And while it may not feel like it at times, diversification has helped.